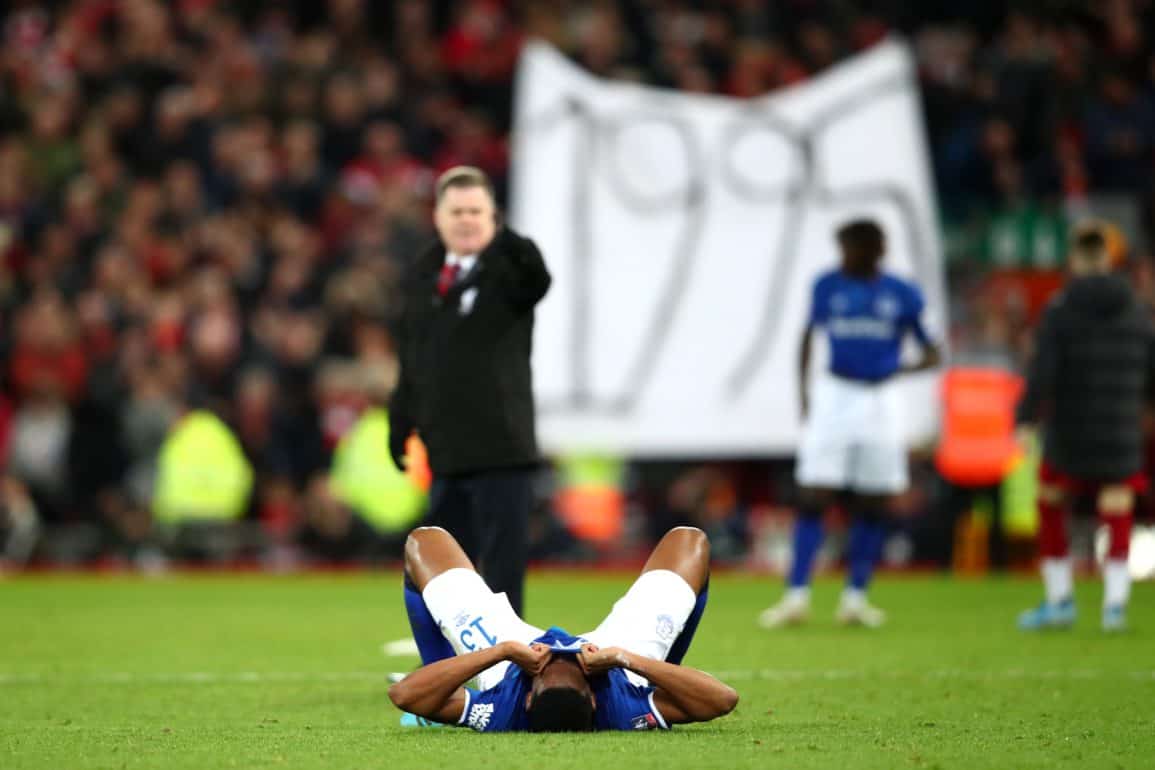 Everton’s road to Wembley came to grinding halt less than half a mile from Goodison as a quite frankly awful performance saw the Blues outplayed, outworked and humbled by a second-string Liverpool with three debutants. The Blues created three glorious first half chances, none of which were taken and that inability to finish came back to bite them in the backside as Curtis Jones curled a winner for the Reds.

Everton embarked on the road to Wembley with a stroll across Stanley Park on Sunday afternoon for a third round tie against ‘them’ for the second time in three seasons.

Liverpool came into the game sitting top of the table with a seemingly unassailable 13-point lead over second-placed Leicester and having gone a full calendar year unbeaten in the Premier League. However, Sunday was about the magic of the cup and thousands of Blues made the stroll yearning for Everton to get a result to keep them in the hunt for a trophy and hoping ‘they’ would be too wrapped up in their title challenge.

For the league derby at the beginning of December, Reds manager Jurgen Klopp made a number of changes in fielding what some saw as a largely second-string side, and whilst they undoubtedly benefited from a couple of questionable decisions, they cruised to a 5-2 victory that prompted the dismissal of Marco Silva. In his pre-match press conference, Klopp looked ahead commenting primarily over the number of fixtures teams are expected to play over the festive period, “People have told me already I wouldn’t respect the cup. It’s not true. But my first job is to respect the players. I’ve got to decide if it’s allowed to play them again. How can you look at a situation like Newcastle – losing four players [to injury] in one game – and not think ‘this is crazy’.”

One player definitely out of the tie was midfielder Naby Keita with a groin strain, but Klopp was expected to include new signing Takumi Minamino in his squad for a possible debut appearance, and with other changes expected, the German eventually named a much-changed starting line-up: Adrian, Milner (c), Gomez, Phillips, Williams, Lallana, Chirivella, Jones, Elliott, MinaMino and Origi.

For Carlo Ancelotti, the cup tie was his fourth game in just ten days in charge of Everton and his first chance to embark on an FA Cup campaign since, somewhat ironically, Everton knocked his Chelsea side out after a memorable penalty shoot-out at Stamford Bridge in 2011.

Our Italian supremo looked forward confidently to his first Merseyside derby game noting, “It is a fantastic challenge but also a fantastic opportunity. We are going to play against the best team in this moment, they are world champions so congratulations to them, but this is a fantastic challenge for us. Every derby is a special game. I know how different this game is. Of course Liverpool is the favourite, but in a derby you never know what is going on. The FA Cup here is completely different to other competitions, different to the Italian Cup for instance. The fact that it is the oldest competition gives it a really special atmosphere. There are a lot of surprises in this competition. It’s a really exciting moment, we have confidence to do our best.”

Ancelotti had injury and fitness concerns over Fabian Delph and Bernard following the New Years loss to Manchester City, but had Morgan Schneiderlin available if required having recovered from injury, suggesting a back three might be employed with the fullbacks pushed forward to boost the midfield. Leaving his selection as late as possible, The Godfather named our starting eleven: Pickford, Coleman, Holgate, Mina, Digne, Sidibe, Sigurdsson, Schneiderlin, Walcott, Richarlison and Calvert-Lewin.

In charge of the 25th FA Cup derby was referee Jonathan Moss.

Crosses by Digne and Williams at either end came to nothing as the side exchanged early blows in front of a packed house with Blues fans taking over the entire Anfield Road end. Sigurdsson with a through ball for Walcott saw Adrian deny Calvert-Lewin with his legs before Origi crossed towards Elliott with Digne conceding a corner in a lively opening to the tie. Milner went down before the set piece could be taken and he left the game inside eight minutes with a suspected torn hamstring to be replaced by Larouci.

A foul by Phillips on DCL gave the Blues a free kick 35 yards out that saw Sigurdsson find Holgate but his header was straight at Adrian who beat it away. And the former Barnsley player needed to get back to his normal defensive duties moments later, conceding a corner as Liverpool countered quickly.

The more experienced Blues had created two good chances in the opening twenty minutes without taking them against a young Reds side who were not overawed by the occasion. Elliott forced a third Liverpool corner as the home side grew in confidence and Holgate needed to be quick to cover for Mina as Lallana burst into the Everton penalty area. Elliott and Minamino combined to force another corner that saw Williams shoot wide of the target, but the signs were concerning for Carlo Ancelotti who cut a frustrated figure on the touchline.

Everton got forward again and a great cross from the right by Walcott found Richarlison with Adrian again with his legs saving Liverpool from going behind… were these missed chances going to prove expensive for Everton?

Another decent move on the half hour mark saw Walcott released into space on the right and send over another terrific cross that DCL dove full length for, but it was just too strong for him. At the other end a good turn by Jones took him away from Sidibe and Schneiderlin but his early shot was off target. Origi tried to pock out Minamino with a cross from the left but the Japanese couldn’t get on the end of it.

A poor clearance by Adrian was picked off by Sigurdsson to find Walcott for another teasing cross that Lallana put behind for a Blues corner. Liverpool survived a second quick corner ahead of DCL shooting wide from distance when a ball for Sidibe might have been the better option. Five minutes before the interval, Origi twisted and turned to get in a shot that saw Pickford make a fingertip save to keep it at nil-nil. Liverpool were finishing the half the stronger and won two more corners in quick succession before two added minutes were signalled. A late chance for the Blues saw Richarlison denied before a cross from Sidibe saw the Brazilian head over the bar.

The better chances had fallen the way of the Blues, but scoreless at half time was no mean achievement by the home side.

No changes for the second half that saw the Blues attacking the Kop and hoping their finishing would be immeasurably better than in the first half. Theo Walcott won an early corner that saw Sidibe steer the ball towards Schneiderlin who bent a shot over the bar. Williams with a fierce drive off the right flank pulled a good save from Jordan Pickford before a foul by Richarlison led to DCL conceding a corner that Seamus Coleman cleared.

Everton got froward on a counter attack with Chirivella deflecting a Richarlison effort for a corner that was too easily defended and cleared by the home side. Lucas Digne was booked for a pull on Elliott on 57 minutes, the free kick saw Mina concede yet another corner. Everton cleared and tried to counter with Walcott taking a knock as Carlo Ancelotti prepared to make changes to try and breathe some life into the Blues.

The double change came in the 63rd minute as Fabian Delph replaced the ineffective (yet again) Sigurdsson and Moise Kean came on for Seamus Coleman with Djibril Sidibe dropping into the right back position.

Everton were struggling to find any cohesion whatsoever and were grateful again to Jordan Pickford as he dived to turn away a long range shot from Origi. Before the resulting corner was taken, Oxlade-Chamberlain replaced Minamino, Pickford claiming the corner and then firing the ball far too lonf downfield for Kean to get on the end of.

And the inevitable happened on 71 minutes as Jones played a one-two with Origi before curling a fine shot beyond the despairing dive of Pickford into the top corner off the underside of the crossbar.

And Everton had Pickford to thank again as Oxlade-Chamberlain cut in from the left to shoot low at the near post. A long ball from Holgate saw Walcott win a corner that was cleared only as far as Schneiderlin who blazed a shot miles off target.

The 78th minute saw Bernard replace Walcott and Liverpool replace Elliott with Brewster. Into the final ten minutes and Oxlade-Chamberlain again tested Pickford as the home side continued to look much the more accomplished side compared to an Everton side who, quite frankly, had been pitiful all second half and were paying the price for woeful finishing in the first.

Into added-on time and a cross from the right by Sidibe saw Kean try a speculative effort that ballooned up over the bar and wide.

A match that should have been men against boys was, in the end, deservedly won by the boys, and in my opinion, Everton should be thoroughly ashamed of themselves, especially after a second half that saw not one shot on target.