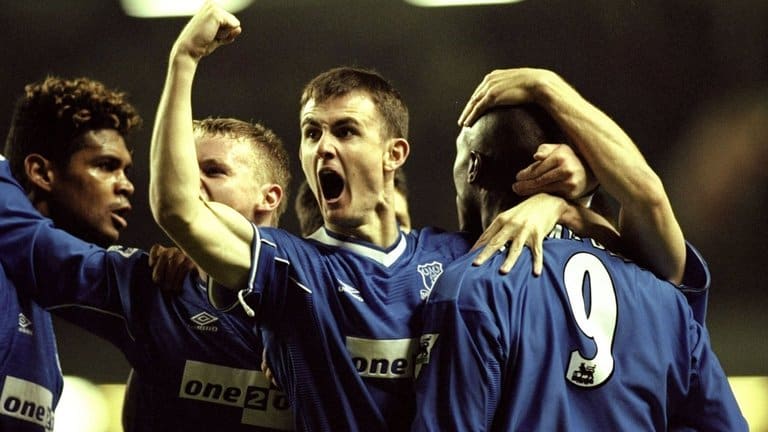 The late 1990s was a dark period for Evertonians. After Kendall’s miserable third stint in charge had been brought to a sad end, Peter Johnson had gone north of the border and brought the Rangers manager, Walter Smith to Goodison.

A debt fuelled transfer splurge had accompanied his arrival as Johnson sought to gamble everything on European riches. It hadn’t worked. Smith found the English top flight a more difficult environment than the Scottish Football League and Everton had only just escaped relegation during his first season in charge.

In the summer of 1999, with Johnson looking for a buyer, the cash tap turned off and Everton facing debts of £18m (largely attributable to that transfer splurge), Smith had taken a machete to his squad, selling the likes of Marco Materazzi, Olivier Dacourt and Craig Short simply to make ends meet.

And yet, on the pitch, despite the boardroom issues, the shrunken squad and Smith’s inability to act freely in the transfer market, Everton started surprisingly brightly.

‘Luckily we’d bought Kevin Campbell, who had a come to us on loan at the end of the previous season and played a huge role in our survival. That gave us a valuable outlet up front’ says Lyndon Lloyd, the man behind ToffeeWeb.

Eight games in, Everton sat seventh, which wasn’t too shabby. Anfield then approached. By modern standards, this might have seemed the ultimate test. But, back then, as Mark Godfrey, former editor of The Football Pink explains, Liverpool didn’t inspire as much fear in Everton as they do today.

‘As a Blue, you’re not meant to be confident playing there. But in the 1990s, there wasn’t the sense of dread that perhaps there is today. We seemed able to take the game to them. In that decade we’d had the measure of Liverpool to such an extent that not only had we held them a few times at their place, we’d also beaten them there a few years earlier when Kanchelskis had torn them apart.’

As the teams kicked-off, Everton started aggressively, and with just four minutes gone and the game barely in its rhythm, the Blues got off to a flyer. Campbell and Jeffers combined to split the Liverpool back four, providing the former with a clear chance which he just about put away.

‘Playing in a Merseyside Derby is a unique experience simply because the game splits families down the middle; dad Blue, mum Red, daughter Blue, son Red. It’s not logical yet it works and makes for a fantastic spectacle and atmosphere mixed in with all the usual bragging rights, showmanship and nervous energy the Derbies bring. As for scoring in a Derby – it is very special! These are moments that will live with me for life’ remembers Campbell.

The goal set the tone for what was to come. As many Blues can attest, it is one thing for Everton to go to Anfield and out-muscle Liverpool, quite another to go there and out-play them. Yet, that is exactly what happened.

Coming on the back of three home defeats and some iffy form in general, Liverpool were there for the taking. And for once, Everton took them.

‘Every time a Liverpool player found himself in a position to launch an attack, so first one Blue shirt and then a second, sometimes a third, surrounded him. Those tactics offered were no real surprise, and maybe neither anymore should have been the football that followed it. Swift and incisive, controlled and thoughtful’ reported the Liverpool Echo.

During the remainder of the half, Everton continued to dominate and on a couple of occasions, first from Jeffers and later from Campbell, Liverpool had to thank Westerveld for keeping them in the match.

According to the Echo, in comparison to the magnificent Blues ‘Liverpool were sloppy, never keeping hold of the ball long enough to properly test Paul Gerrard and their frustration was evident in the 26th minute when Michael Owen was guilty of an awful tackle on David Weir which could so easily have been the first of the glut of dismissals which were to follow.’

Derbies have a tendency to be bad tempered affairs. But even contextualised, this Derby was particularly nasty.

‘Tackles flew in. Players were jostled and pushed, it was a real blood and guts sort of game’ remembers Don Hutchison.

Surprisingly, Liverpool were the worst transgressors. Evidently feeling the pressure when their natural game failed to trouble Everton, they started getting stuck in.

Not that it had much impact. For most of the game, Everton were in control and should have gone further ahead early in the second period, if only Jeffers had been on better form, the young forward blowing two decent chances.

With 15 minutes left to go, and Liverpool growing increasingly frustrated, the complexion of the game then altered completely when Jeffers and Westerveld, who had clashed in the first half were red-carded.

‘The pair traded half-hearted blows inside the penalty area after Jeffers, who was flagged offside by a linesman and had collided with the keeper chasing a throughball’ reported the Echo.

With all substitutes used, Steve Staunton took over in goal and didn’t do too bad a job. Frustratingly, the Liverpool defender even managed to execute an excellent save, tipping over from Abel Xavier to thwart Everton’s attempts to capitalise on his inexperience.

That chance aside, the sendings off seemed to sap some of the energy out of the match. With the seconds ticking along and neither side looking particularly creative, the likelihood of an Everton victory began to look more and more certain.

But the game still had one more talking point to throw up. In the dying minutes Steven Gerrard received a straight red after a horrific tackle on Campbell, which saw him attempt to cut the Everton forward in half with his boots. Gerrard later admitted that he had come on with the expressed intention of taking out an Everton player, a revealing vignette that was excluded from the many articles that pored over his career when he left Liverpool (which largely painted him as a professional of exemplary character and intent).

The sending off was pretty much the last action of the game and when the whistle sounded soon after, Evertonians could savour a well-earned and rare victory.

‘Over the years, our club has played its part in many memorable Merseyside Derbies but more often than not ended up on the losing side. It made a nice change for us fans to be part of a memorable game that for once saw Liverpool take on the role of the vanquished. It was a time to celebrate,’ remembers Lyndon Lloyd.

The following is an edited extract from Everton’s Greatest Games: The Toffees’ Fifty Finest Matches.

For more information on that first derby (and a load of other Everton games), check out: