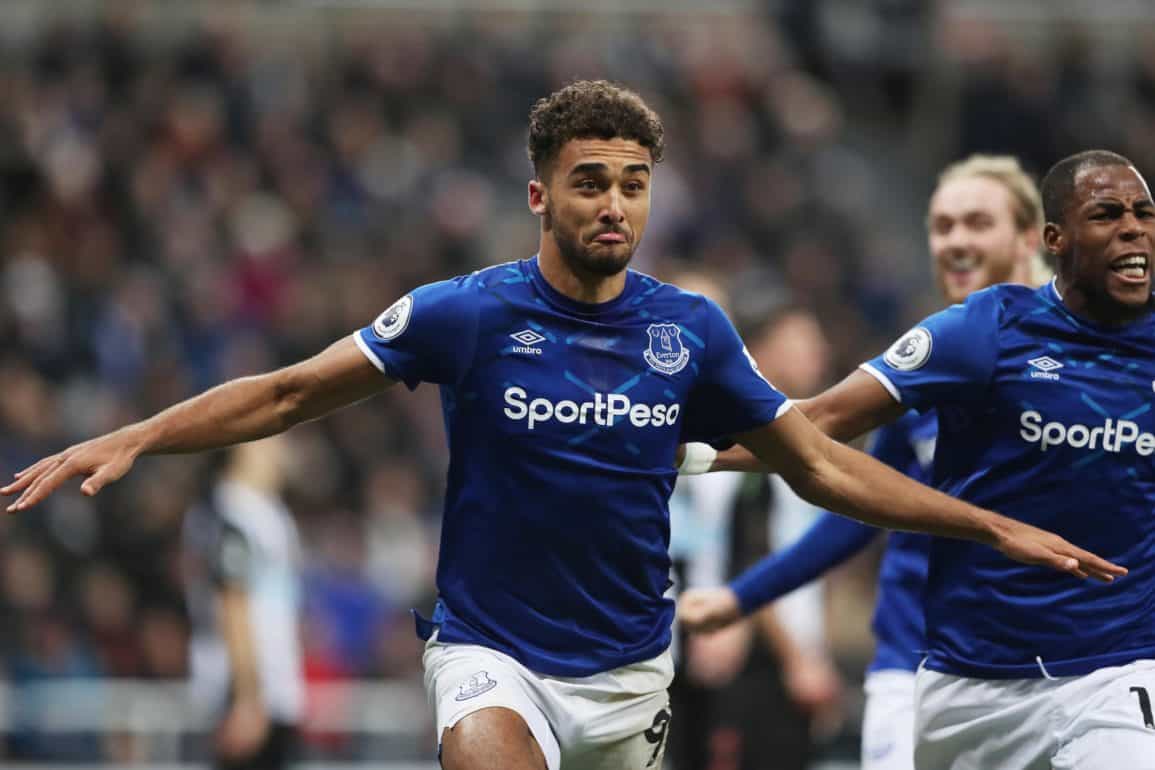 An excellent hard-fought battling performance from the Blues saw them take the three points from St.James’ Park and end 2019 on a high with their second straight win under Carlo Ancelotti.

The final game of a hectic December saw the Blues travel to the frozen wastelands of Northumbria for a match-up with Steve Bruce and his Magpies.

Another sold-out travelling army of Evertonians set off early in order to secure base camp in the foothills ready for the early afternoon assault of the North Face of the Leazes End of St.James’ Park with oxygen and mountain rescue teams on stand-by alert.

The Toon have been in good form of late, until Boxing Day when they took a lead at Old Trafford that merely served to rouse the home side into sending them back north with their tails well and truly between their legs.

Newcastle manager Steve Bruce duly joined the clamour for a review of the festive period game scheduling when he commented in his pre-match press gathering, “For the first four months of the season we played twelve games and then you’re asked to play six or seven games in a month – it’s ludicrous. You’re asking players to play tired and that’s when injuries happen.” And to endorse those comments he advised that defender Javier Manquillo had a calf muscle problem and would undergo assessment ahead of the game, and that Paul Dummett, with a groin strain, and Ki Sung-Yueng through sickness were both doubtful to play.

With a win and clean sheet in his opening game for the Blues, Carlo Ancelotti was in good heart despite his squad still being far from full strength and his cited the upbeat mood in the camp as a key factor going to Newcastle. “The spirit of the team, I have really enjoyed. Everton is a family. I saw the spirit of the players in the game against Burnley and in the training sessions. We have to keep the same spirit [against Newcastle]. We [also] want to be more efficient, to give good passes, to make good choices.”

But as well as looking to maintain recent form, the Italian had one eye on the upcoming visits to Manchester City and Liverpool in the FA Cup when he said, “Of course, I have to change players and try to put more players fresh if possible. We are an energetic team so we look forward to the next game. We don’t have really time to recover but we are going to check the players that were not able to play [on Boxing Day] – maybe they have more possibility to play against Newcastle. We have to see how the players recover. I am going to decide on the line-up on the day of the game.”

He would be hoping that the Blues could replicate their domination of Burnley against Newcastle, Boxing Day saw them have 70% possession and out chance Burnley 22 to 6, and for his first away trip as Blues boss, he shuffled his pack in selecting a starting eleven of: Pickford, Sidibe, Keane, Holgate, Baines (c), Walcott, Davies, Sigurdsson, Richarlison, Calvert-Lewin and Kean.

In charge of proceedings was the follically challenged Lee Mason.

An early scare for the Blues in opening minute as Almiron got beyond Keane to reach a ball from Joelinton but toe-poked his effort wide. And the home side had the better of the opening exchanges, a Joelinton shot on the turn easily gathered by Pickford on five minutes.

Everton won the first corner with Willems deflecting a Sidibe pass behind, but the Newcastle defence dealt easily with the Sigurdsson set piece. Everton were looking to get the ball wide to Walcott and Baines on the left and it was the latter who earned the Blues a second corner that eventually saw Newcastle scramble the ball away for a third corner with Kean and Walcott trying to get on the end of a cross from Baines. Newcastle got a fourth corner clear as the Blues kept the pressure on before a collision between Baines and Almiron saw a free kick awarded to the Blues about 23 yards out.

Sigurdsson’s set piece hit the Newcastle wall, but his second effort rebounded kindly for Calvert-Lewin to finish neatly from six yards on 13 minutes, his ninth in total for the season so far.

DCL set Kean free into space on the right and he fed Walcott for the shot that was blocked by Fernandez, but this was an encouraging start from the Blues.

Carroll beat Keane to a header and his flick on found Joelinton but Pickford was cool in going full stretch to his right to make a good save. A terrific ball down the right channel from Sidibe saw Fernandez lean on DCL who went down, but he didn’t get the decision from referee Mason.

Richarlison was fouled by Schaer and he was lucky not to see a yellow card, before a fine ball from Sigurdsson down the right wing saw Lejeune bring down Walcott for another free kick that disappointingly didn’t produce.

The Blues were knocking the ball around confidently but rode their luck when Willems got free of Sidibe to find Carroll whose shot came back off the post for Almiron to net, but the offside flag saw his effort ruled out. Newcastle though were boosted and Everton needed to stay calm to quell the storm.

DCL was battling hard and won a free kick for a foul by Lejeune as the Blues worked the ball clear from the right side through Walcott and Sidibe. Newcastle were looking to throw high balls into the box for Carroll and earned their first corner as Sidibe cleared, Keane and Holgate combining to get the Shelvey set piece away. Pickford with a strong hand pushed a Schaer shot away and Sigurdsson conceded a second corner as the home side strained for an equaliser. A foul by Richarlison on Almiron gave the Magpies another chance to swing a ball into the Everton area, Shelvey with the cross, DCL with the clearance.

Into the final five minutes of the first half and a break by Walcott saw him looking for Kean to make a run but the Italian stayed wide left and the chance was wasted. Newcastle countered to win another corner, Michael Keane with the clearing header and eventually a Baines block on a shot from Almiron seeing Lejeune curl a speculative effort well wide of Jordan Pickfords’ left hand post.

Newcastle were still coming on strong and Almiron blazed another effort wide of the target ahead of one added minute being signalled. A bit of push and shove between Holgate and Joelinton following a foul by Holgate saw the Newcastle player pick up the first booking of the game, but Newcastle could make nothing of the free kick and the Blues led at the break.

No changes by either manager during the break saw Sidibe need a moment to clear his head after a collision with the elbow of Carroll in the first aerial challenge of the second half.

Moise Kean with an early stepover earned the Blues the first corner of the half, the ball appeared to hit the arm of Yedlin, but half hearted appeals for a penalty were ignored by referee Mason. Excellent work from Tom Davies saw him work the ball to DCL and onto Kean who saw his shot well blocked by Dubravka, but the Blues had started strongly. Newcastle countered with Joelinton winning a corner off Michael Keane that was easily dealt with. The Blues counted with Kean being forced wide before shooting straight as Dubravka again.

Another good clearing header by Keane found Richarlison to loft a teasing ball in the direction of Kean, the home defence hurriedly conceding another corner kick which Carroll cleared easily leading Tom Davies picking up a yellow card for a foul on Willems as he looked to break clear. Willems next went down wide left after a feather touch from Walcott and the free kick to the back post was headed down by Carroll, easily outmuscling Sigurdsson, for Schaer to swivel and bury his shot inside the post for 1-1 on 56 minutes.

A poor touch from Keane gave Newcastle easy possession and Carroll struck a firm shot from 25 yards that Pickford dealt with comfortably.

Everton saw a second goal chalked off as Baines crossed from the left, DCL headed down and Dubravka pawed out a Richarlison shot for Holgate to net from an offside position. Carlo Ancelotti, sensing the momentum was slipping the home sides way, prepared his first change, withdrawing Moise Kean for Fabian Delph just past the hour mark.

And the move worked to perfection as two minutes later, Everton calmly worked the ball to halfway here Walcott turned to release Richarlison down the right for a perfect cross into the six yard area for Calvert-Lewin to slide in and finish. All the noise was now coming from the travelling Blues, the ascent of the Leazes End stairways having been rewarded.

Almiron turned away from Sidibe, the Frenchman a tad lucky not to see a yellow card ahead of the Blues second change, Seamus Coleman replacing Theo Walcott on the 70-minute mark, the resulting free kick for the Sidibe foul coming to nothing.

Coleman dropped into his normal right back position allowing Sidibe to push forward into midfield. Into the final twenty minutes and Shelvey ballooned a header well wide and Steve Bruce made a double change, Gayle replacing Joelinton with Atsu replacing Lejeune.

Atsu was caught by an accidental high boot from Delph to give the home side a free kick thirty yards out, Holgate with an easy clearing header as Schaer strayed offside.

Richarlison was brought down by Hayden who was rightly booked for the challenge ahead of Yerry Mina replacing Leighton Baines for the final ten minutes plus any added-on time.

Mason Holgate showed great determination to burst forward in support of Davies and Richarlison and he duly won a corner that Sigurdsson swung in but neither Davies not Mina could get a telling finish. The home fans were hoping for a late goal, as has become a mark of their sides recent play and Sean Longstaff replaced Willems in the last throw of the substitution dice by Steve Bruce.

Mina wrestled Carroll to the ground inside the last five minutes, the free kick from Shelvey being easily cleared amid appeals for a foul on Carroll by Sidibe that the referee had a clear view of and waved away.

Four added minutes were signalled and stoic defending and smart play by Richarlison worked some valuable seconds off the clock. More good work from Richarlison saw him win a late corner to eat up more time and that referee Mason gave DCL a yellow card for wasting more time over the corner.

Newcastle were desperate but it was Sidibe pushing forward to run further time down ahead of a tremendous roar from the travelling fans at the final whistle and the second straight win for the new Godfather of Everton – Don Carlo Ancelotti.

A terrific, battling performance from the Blues with outstanding showings from Tom Davies, Mason Holgate and the double goalscorer, Dominic Calvert Lewin.