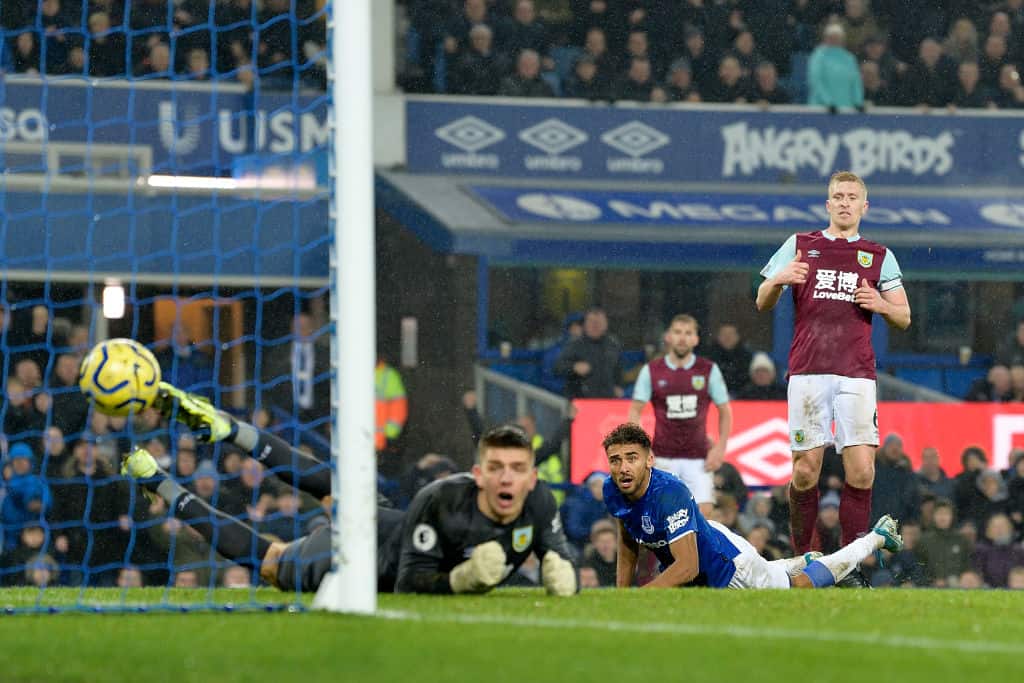 Calvert-Lewin beauty as the Ancelotti era bgins with a win

Carlo Ancelotti maintained his record of never having lost his first game in charge of a new club as a terrific diving header from Dominic Calvert-Lewin saw the Blues to victory in a game they dominated thoroughly without battering the visitors into submission.

Boxing Day footie at the Grand Old Lady ushered in the Carlo Ancelotti era as the multi-trophied Italian took charge of his first game as manager of Everton Football Club. Duncan Ferguson returned to the dugout in his tracksuit after his four game stint that yielded five points from a possible nine and returned a huge chunk of pride to everyone associated with the club.

Addressing the press, some of who still can’t get their heads around Ancelotti joining Everton, he commented, “The biggest factor to come here was the ambition of the club, but also the history, tradition and the atmosphere of the supporters as well. We want to compete. I think the squad is good – there is a good mix. You can see a sense of belonging. I am satisfied. Of course, we have to improve and we will improve. You can see the spirit of the team and then how the supporters want to see offensive football, good football. That is what I will try to bring here.”

He continued adding, “It is really exciting, like the first day of school, It is a new experience for me. I have received a lot of support in these past days from the Club, from the supporters I met at the hotel and in the city. But I am really focussed on the game and would like for the team to play fantastic football. It is important [for me] to know the culture and tradition and history of the Club. The fact the atmosphere in the stadium can help the team play better and be stronger. The experience I had from Saturday [watching Everton against Arsenal] was the fact the stadium can help you keep a high tempo in the game.”

The already injury affected squad made his first team selection an interesting one as without the long-term inured Andre Gomes and J-P Gbamin, Ancelotti was also unable to call upon Alex Iwobi and Morgan Schneiderlin for his debut game.

With many wondering if he would use his fellow Italian Moise Kean, a player he’s described as a ‘fantastic talent’ our new manager opted for his first starting eleven: Pickford, Coleman (c), Mina Holgate, Digne, Sidibe, Sigurdsson, Delph, Bernard, Richarlison and Calvert-Lewin.

The visit of Sean Dyche’s Burnley after their win away at Bournemouth promised a stiff challenge for this traditional Boxing Day fixture, although the Clarets manager also had some selection issues with Jeff Hendrick suspended, Gudmundsson recovering from a hamstring strain and former Blue Aaron Lennon fit again after a bout of sickness.

The man with a voice like he’s chewing gravel said of his managerial adversary, “The big-name managers add to the profile of the league. I’ve noticed the change in my time and there’s now a lot more emphasis on the managers than there was before. The level of quality certainly rises when people like him come into it. Even with his fantastic background, a few days is not a long time to change things overall. However, you usually get a response from the players but without a shadow of a doubt, it’s a different challenge. I don’t know what his remit is and it’s an interesting one, but Carlo must have gone in thinking he can make it a very successful place.”

Our referee on a cool and damp afternoon was the baldy-headed and ever unpopular Anthony Taylor.

For the third game in succession, the Blues attacked the Gwladys Street in the first half but it was Burnley with the first attack, from a free kick Yerry Mina heading clear from under the crossbar to concede a corner that was successfully defended.

Tarkowski with a block on a shot from Richarlison as the Blues worked the ball forward on our first foray forward. Sigurdsson floated a free kick to the back post for Mina to head down, Pope parried and Holgate was unlucky not to poke the rebound home. Richarlison took a knock down from DCL to feed Sidibe for a cross that was blocked behind for the Blues first corner that Pope gathered far too easily.

A foul by Brady on Richarlison, bursting forward on a ball from Delph, gave the Blues a free kick 25-yards out that Digne took and was deflected for a corner off the Burnley wall.

The Blues had had the best of a somewhat scrappy opening quarter hour that had seen a number of free kicks break up the flow of the game, ahead of Richarlison playing Coleman into the Burnley area but his cross was blocked when a shot might have been the better option.

Taylor with another foul impeded DCL giving Sigurdsson another chance to put a cross into the danger area where DCL got his head to it, but couldn’t direct his effort on target.

Everton were playing patiently, looking for and trying to work openings in the Burnley rearguard which was looking very well drilled in how to soak up pressure. The Blues worked the ball left tov right, Richarlison finding Bernard to cross and win another corner as Mee headed behind. The free kicks continued to flow and another, this time on Coleman, saw another chance for Sigurdsson to cross towards Mina, Burnley cleared but the ball quickly came back in from Richarlison to win another corner.

Half an hour gone and the Blues were dominating the possession and the territory, just the killer was lacking and it nearly came as Richarlison won a header allowing Bernard to burst forward and feed Sidibe and his shot was kicked clear by Pope only to hit a defender before being scrambled away.

Digne with a pull on Brady gave the visitors a fee kick out wide and Westwood lifted it into the box where Wood failed to head down, his effort sailing high over the bar.

A lovely takedown from DCL saw Tarkowski take his legs for a free kick wide left but again the set piece from Sigurdsson was cleared too easily for a corner that then saw Pope easily gather the Icelanders inswinger.

Bernard with a great ball for Digne saw his cross cleared but only as far as Bernard who crossed to find the head of DCL but he couldn’t direct his effort on target. Coleman forced Taylor into conceding yet another Blues corner that came out to Digne and his shot was deflected off Tarkowski for a corner on the left that disappointingly came to nothing.

One minute of added time at the end of the half that had seen Everton dominate possession until Sidibe conceded a late corner that Burnley failed to take in time before referee Taylor blew up.

No changes by either manger during the interval, and again it was Burnley with the first attempt (?) a speculative shot from Rodriguez flying so far wide, it went out for a throw-in. Brady found Wood on the right and he held the ball up for McNeil to win a corner off Holgate that the Blues dealt with comfortably.

The second half quickly settled into the manner of the first half, Everton having more of the ball but the game was crying out for some quality, an injection of pace, a stoke of luck, a fluke, anything, something to spark the holiday crowd into life.

Bernard on a quick ball from Richarlison found space to shoot with Mee blocking for a corner on the right that Brady cleared easily. Everton were looking to increase the tempo, not before time, but Burnley were defending well until Richarlison played in Sidibe who lost control at the vital moment and the ball ran behind for a goal kick.

Wood held up a long ball to find McNeil for a cross to the back post where Brady couldn’t direct his header on target, but it was a warning that the visitors could still pose a threat. Everton got back on the front foot with Bernard and Digne, the ball eventually crossed in by Delph for DCL to head straight into the arms of Pope.

Past the hour mark and Everton were still pressing forward, winning another in a long line of corners but again the Sigurdsson set piece was far too easily cleared by a resolute Burnley defence.

Gudmundsson was the first change of the afternoon for Burnley on 67 minutes replacing Brady.

The Blues worked the ball forward but as they slowed the pace, Burnley got men back and the end product was a rising shot from Coleman that posed no threat to Pope.

Burnley made their second change on 73 minutes, Barnes replacing Wood in a straight swop of strikers for the final 17 minutes plus added-on time.

A free kick in the right saw Sigurdsson find the head of Mina, but once again the header went straight at Pope. Burnley broke quickly and Pickford needed to race from his line to gather the ball, but he was adjudged to have carried the ball outside the area to give Burnley a free kick that in keeping with so many set pieces was wasted.

Moise Kean was the Blues first change, replacing Bernard in the 77th minute… cometh the hour ??

And the breakthrough finally came on 80 minutes as Sigurdsson found Sidibe and his cross from the right saw Calvert-Lewin dive full length to send his glancing header off both posts and across the line with Pope rooted. It was just desserts for the much maligned striker who had run his socks off all afternoon and an overdue reflection of the measure of the possession, territory and chances that the Blues had had.

Tom Davies replaced Richarlison on 86 minutes, the Brazilian having taken a slight knock. Burnley made their final change on 88 minutes, Long replacing Cork to try and force a late equaliser.

The Blues third change saw Djibril Sidibe replaced by Theo Walcott on 89 minutes, the Frenchman receiving a standing ovation for his efforts and that all-important goal-providing cross.

Everton were looking to run down the clock and Burnley wasted a free kick, Mee straying offside in his eagerness to get into a heading position. Davies drew a free kick from a hefty challenge by Long and that was that for a successful home debut for Don Carlo, the new Godfather of Everton FC.