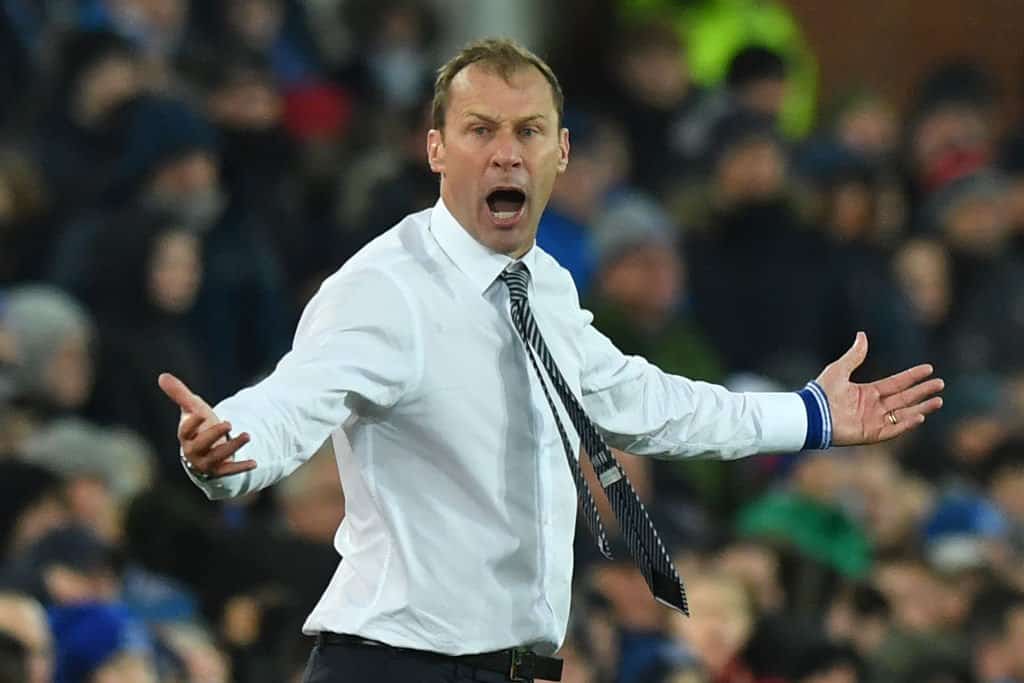 Blues fight back but go out on penalties.

A fantastic, battling second half from the Blues saw them recover from a two-goal half time deficit to force a penalty shoot out at the Park End.

With four points from a possible six against Chelsea and ManU, Wednesday evening posed the question, could Duncan Ferguson get another tune out of his injury and sickness affected squad in the Karaoke, sorry Carabao Cup ?

In form Leicester City arrived at Goodison having beaten the Toffees just over a fortnight ago. However they were about to face a re-invigorated Everton who were looking to pose a much greater threat and a Goodison Park desperate for cup progression to the semi-finals.

Whilst the club were in the throes of finalising the appointment of Carlo Ancelotti as the full time successor to Marco Silva, stand-in boss Duncan Ferguson remained in charge for a third successive game and he was looking forward to Goodison being the proverbial twelfth man. “It’s a quick turnover but when you get a few results, everybody is happy and looking forward to the next match. The supporters will turn up, was never in doubt, they love their club don’t they? We need them and I’m sure they’ll deliver. Leicester are gong to be a very tough test but we’re at Goodison, and we need to make it a bear pit.”

Quizzed about his possible team election, Ferguson noted, “Lucas Digne will not be fit because of a groin strain, Fabian Delph is close, but this game is probably too soon for him. We’ll give Gylfi Sigurdsson and Djibril Sidibe as long as possible to see if they can play.”

Leicester arrived on a ten-game unbeaten run and as three time winners of the League Cup in it’s various guises were looking to stake their claim for final four slot.

Former RS manager Brendan Rodgers noted, “We want to challenge for trophies. In the last couple of years, the team has fallen short at the quarter final,stage, so we’re looking to make the semi. To do that we need to put in a good performance on Wednesday.

With no undue injury issues to contend with, Rodgers was able to select his starting line-up from a full squad and finally settled on: Schmeichel, Pereira, Morgan (c), Evans, Chilwell, Ndidi, Praet, Perez, Tielemans, Maddison, Albrighton and Vardy.

Under the Goodison lights and in front of another sell-out crowd on a cold, wet, windy evening, our referee was Jonathan Moss.

With Everton attacking the Gwladys Street end to start the game, they forced a corner inside thirty seconds, DCL volleying wide from the set piece taken by Bernard.

A poor clearance by Schmeichel gave Everton a half chance as Richarlison collected and got ball beyond the goalie but Evans was back to shepherd the ball out for a goal kick.

After that the rest of the opening quarter hour was pretty even before Maddison fired over after Vardy had stepped over a cross from the right from Perez.

Leicester seemed quite happy to invite Everton to come onto them, and looking to counter at speed if the Blues lost possession.

And it was the visitors who struck first as Perez latched onto a loose ball and his cross to the edge of the area saw Maddison coolly slot the opening goal on 26 minutes.

Boosted by having taken the lead, the visitors rubbed salt in the would two minutes later as Maddison swung in a corner from the left, it was headed on at the near post and Evans had the simple task of seeing the ball over the line from less than a yard at the back post.

Everton tried to get back into the game, but too many passes were going astray and it wasn’t until the 35th minute that they had their best, probably only, chance of the first half. Evans could DCL about 35 yards out and Bernard floated the free kick into the area where Mina had found space, but his header wasn’t powerful enough to beat Schmeichel going down to his right hand side.

Moise Kean warmed up during the interval and duly started the second half as the replacement for Bernard, getting a very good reception from an Everton crowd desperate to see the lad do well in a blue shirt.

The introduction of Kean saw DCL move wide left and Iwobi push forward through the middle. Everton were trying hard to create something, but Leicester were looking composed and ever ready to counter at speed.

And they demonstrated this when Chilwell found Maddison who played in Perez for a shot that Pickford tipped over the bar. Baines with an excellent covering challenge denied Perez a run in on goal after Mina badly misjudged the bounce of a long throw-in.

Moise Kean saw a shot deflected away for a corner that Baines swung into the six-yard area where Mina dived but failed to get his head on the ball.

Another incisive Leicester counter saw Perez feed Praet and Pickford did well to kick the shot clear. The visitors continued to counter effectively and were unlucky not to add a third goal as a curling effort on 66 minutes from Albrighton beat Pickford and cannoned to safety off the woodwork.

Leicester made their first change on 68 minutes, Gray replacing Perez.

Just when it looked like nothing was going to go the Blues way, they conjured up a goal from nothing, Coleman squeezing the ball through to Richarlison who turned Chilwell to cross perfectly for Tom Davies to volley home from twelve yards on 70 minutes.

Everton with the crowd right behind them came again with Moise Kean getting a cross from the right that saw DCL head over.

With 13 minutes left, Cenk Tosun came on for Alex Iwobi as the jacket less Ferguson decided it was time for all out attack. Leicester responded three minutes later sending on Soyunco for Albrighton.

Richarlison latched onto a loose ball to beat Soyunco and cross, but neither Kean nor Tosun could get on the end of it. Anthony Gordon made his first team debut with seven minutes to play, replacing Richarlison.

Leicester wasted more time in delaying an Everton goal kick to send Choudhury on for Praet.

Into four added minutes and Goodison exploded as Leighton Baines rolled back the years to unleash an absolute howitzer that flew into the top corner of the Park End goal with Schmeichel nowhere near it.