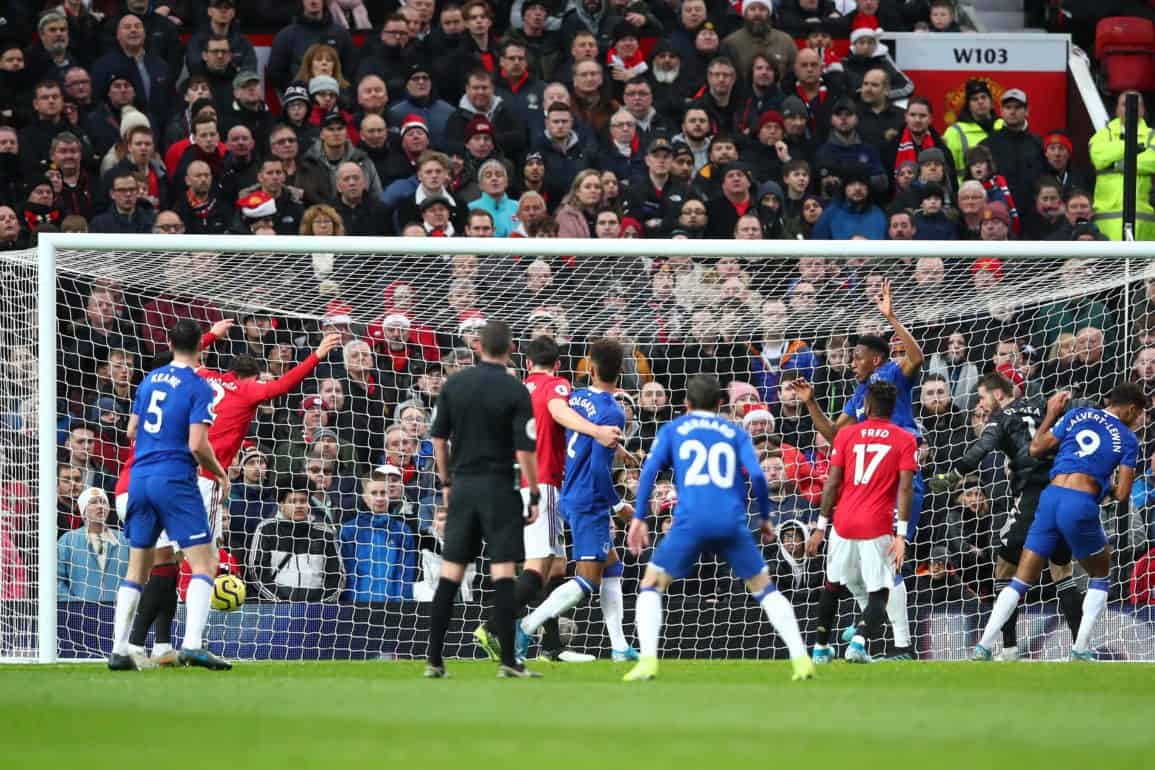 Duncan Ferguson staked another claim to be given the managers job even longer as he took an injury and sickness riddled Everton to Old Trafford and they thoroughly deserved a share of the spoils from an entertaining game.

Sunday saw the Blues make the short trip down the M62 to Old Trafford to face a resurgent Manchester United who’ve won their last four games and who were looking to stretch their current unbeaten run to eleven games.

And the home side had a score to settle with Everton following the 4-0 trouncing inflicted upon them in last seasons Goodison Park encounter. United manager Ole Gunnar Solskjaer referred to that game in his pre-match press conference saying, “We lost quite clearly against Everton last year. We’ve spoken enough about what happened that day and how we looked like a team. It was more or less a shambles.But I’ve said too many times this year as well, we’re not that group any more. This is a different group, a group that’s ready for the fight and is ready for the football. Mentality sometimes is strange to explain. The mood in the camp is different, definitely.”

The Norwegian was unable to include Paul Pogba, Eric Bailly or Tom Fosu-Mensah in his team selection thinking and he had to wait for a late fitness check on Jesse Lingard who suffered a calf strain in last weekends Manchester derby victory over champions City.

While the Everton hierarchy continued their search for a full time manager to replace Marco Silva, stand-in boss Duncan Ferguson was entrusted with a second game in charge of the Blues following his tremendous debut success over Chelsea last weekend.

The fans favourite enthused in his press meeting, “It has been great [this week], those points were so important for us, everyone is happier when you get wins, the boys seem good, they have trained well and are motivated to go again. We are confident because we are off the back of beating Chelsea.”

Having stunned Chelsea last weekend and invigorated Goodison with his sheer passion and exuberance, Ferguson showed a savvy understanding of the task ahead of him when he added, “But Manchester United are on a great run, they’ve lost only one home game all season, and we’ve won once in the past 27 years there. It is going to be difficult for us but it’s one we will be up for. United are on the up at the moment and they are a very good team. It will be a big ask but I am sure we can give a good account of ourselves. I’d be on the roof if we get a win there.”

While Seamus Coleman had recovered from a rib injury and was ready to play his 300th game for the Blues, Theo Walcott and Fabian Delph were ruled out through injury, Djibril Sidibe and Gylfi Sigurdsson were both ruled out through sickness and Ferguson was still sweating on the availability of both Lucas Digne and Yerry Mina.

Leaving it as late as possible, Ferguson was able to include both Lucas and Yerry in an expected 5-3-2 formation from this starting eleven: Pickford, Coleman (c), Keane, Mina, Holgate, Digne, Davies, Bernard, Iwobi, Richarlison and Calvert-Lewin

Our referee was Michael Oliver.

A very early scare for the Blues as Rashford and Martial combined to feed Fred and then onto Lingard for a quick shot on the turn that thankfully went wide.

The Blues responded with a long range effort from Holgate that de Gea tipped over for a corner. Everton kept the pressure on to force a second corner that saw Bernard blaze wide as United scrambled the ball clear.

Ferguson quickly changed the formation to a more conventional 4-4-2, moving Holgate forward into midfield to help counter the pace of the United midfield.

Michael Oliver showed the first yellow card to Tom Davies with less than five minutes played for a clumsy challenge on McTominay.

Holgate again tested de Gea after Iwobi and Richarlison worked the ball into the United penalty area and it was laid back to the young defender/midfielder.

A long ball from Lindelof picked out Rashford but his first time shot went wide of Pickfords near post to complete a bright end-to end opening ten minutes.

Another chance came the way of United as James raced from down the right channel and with Pickford choosing not to come out to narrow the angle, the young Welshman fired his shot across the face of goal and wide.

On the quarter hour mark, Lingard was very lucky not to see at least a yellow card for a studs-up challenge on Keane that thankfully didn’t connect.

The home side won their first corner in the 22nd minute and a fine clearing header from Mina saw the ball played all the way back to de Gea by United.

Richarlison had managed to run off a knock, but Lucas Digne went down holding his groin and had to be replaced by Leighton Baines in the 24th minute.

Another foul by Davies gave United a free kick in a dangerous position that saw Pickford do extremely well to beat out a fierce shot that came in from Rashford.

Everton enjoyed a nice passing move that saw the ball played left and right before Coleman was caught offside getting onto a ball from Iwobi.

A poor header from Luke Shaw fell nicely for DCL, but his powerful shot went straight at de Gea.

Good work down the left flank saw Richarlison win another corner for the Blues that Bernard got a second attempt to cross, but United held firm.

A long ball from Pickford was worked forward to Richarlison by Baines and lured Lindelof into conceding a free kick wide left that eventually saw Holgate screw a long range shot well, well wide of the target.

Everton were now searching for a goal and good work by Davies and Iwobi saw a cross intended for Richarlison hastily headed behind for another Blues corner by Maguire, and the 36th minute set piece brought the opening goal as Baines swung it in, de Gea flapped at it under pressure from DCL and Lindelof couldn’t adjust quickly enough in conceding the OG at the back post. A jacketless Duncan Ferguson on the touchline celebrated while United ball boys ran for cover from the big man.

The Blues went in search of a second and a great cross from Iwobi was just too strong for the diving Richarlison to get on the end of.

United were rattled by the Blues having taken the lead and were somewhat fortunate to be awarded a corner when a McTominay shot was adjudged to have taken a deflection off Holgate.

And into added-on time, Mina with a telling block foiled a late United attempt for an equaliser before the break.

No changes by either manager for the start of the second half as the Blues attacked the old scoreboard end of Old Trafford.

Wan-Bissaka got in a good cross from the right that Keane headed clear and Fred sliced his shot well wide of the target. Rashford was next to blaze a woeful effort more akin to a rugby conversion as United sought an early equaliser in the opening five minutes of the second half. Martial won a rather fortunate free kick and Fred bent it in with power where Keane did enough to deny Maguire a chance to get on the end of it.

James got away from Baines to cross low into the Everton area where Keane again stood firm to clear to find Mina to get the ball cleared. United were looking to use their pace and width while Everton suffered another injury with Davies going down in pain after a challenge with Lingard, forcing Anthony Gordon and Cuco Martina to take to the touchline to warm up.

Davies was okay to carry on after some treatment and Holgate, who’d adjusted well into his midfield role, won a free kick that saw Mina go down after a slight bump from Maguire and Richarlison booked for blasting the ball into the crowd when the ref waved away penalty appeals.

DCL with a towering header cleared a United corner ahead of Coleman conceding another that was wasted by the home side. Everton were maintaining their defensive shape under increasing pressure as we reached the hour mark of an enthralling game.

Pickford needed a strong hand to parry a firm shot from Shaw and the follow-up effort from James flattened Lingard. DCL swapped passes with Bernard before screwing his shot wide across the face of goal.

United made their first change on 65 minutes bringing on Greenwood for Lingard. DCL was flattened by Lindelof who was rightly booked for the clumsy challenge from behind. Good work from Coleman saw him get a telling interception on a ball intended for Rashford as United began to up their tempo.

A shot from James got through the legs of Keane, but wasn’t strong enough to worry Jordan Pickford in the Everton goal before Lindelof fired just over the bar.

Everton made their second change on 70 minutes, Moise Kean replacing a tired Bernard.

Greenwood won another corner for the home side and Everton cleared quickly releasing Kean down the left flank with Shaw, covering for an out of position Wan-Bissaka, making a timely block as Kean tried to find DCL on oceans of space.

Ferguson, again jacketless despite the cold and the rain, was imploring his charges to maintain focus for the last quarter hour and it needed a terrific challenge from Wan-Bissaka to deny Richarlison as he got forward and into the United area.

A free kick by Fred saw Pickford climb to punch clear from Maguire and despite United keeping the pressure on, it was a weak shot from James that came to nothing.

But the United pressure tolled in the 77th minute as James found Greenwood and his shot beat Pickford low to his left and squeezed inside the post for the equaliser.

Rashford tried an audacious shot from a free kick wide out on the left and Pickford again chose to punch it clear. Everton needed to re-group and slow the game down to deny United the ball, instead they pushed forward, Davies and Iwobi working the ball to DCL to cross but only into the arms of de Gea.

Into the final ten minutes and it was still up for grabs and Everton were not content just to defend, Davies and Iwobi again combining with the former Arsenal player forcing de Gea into a full stretch save in conceding a corner.

Baines made a vital block as Fred found Wan-Bissaka in space on the right ahead of Juan Mata replacing James for the final five minutes.

McTominay upended DCL to give Everton a free kick 35 yards out which Baines struck but fired much too high over the bar to trouble de Gea.

Oumar Niasse was the Blues final change on 88 minutes replacing Moise Kean much to the Italians displeasure as he went straight to the dressing room.

Four added minutes were signalled and Pickford went down to hold onto a cross come shot from Rashford from the right. Coleman did well to recover after being beaten for pace by Rashford getting back to intercept a pass from Mata intended for Rashford again.

With the travelling Evertonians making most of the noise, the Blues again pushed forward to eat up some valuable seconds and then Niasse and DCL working hard to retain possession to see out the final moments for a well-deserved draw