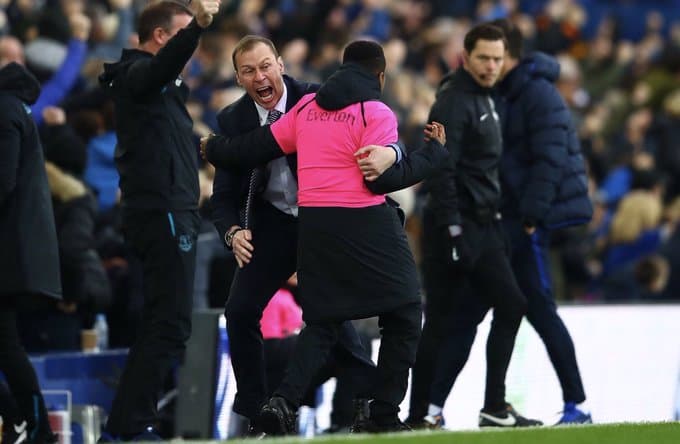 A quite astonishing game of football, the likes of which Goodison hasn’t seen for some time saw a beleaguered and far from full strength Everton side upset the form book and put high-flying Chelsea to the sword in swashbuckling style.

Every tackle was contested, a high tempo throughout, full blooded commitment and some genuine quality were the hallmarks of a performance the home fans have been craving for weeks and weeks.

After another turbulent week in history of Everton Football Club, the boys in the Royal Blue jersey took to the field to face Chelsea with former player Duncan Ferguson in temporary charge following the Thursday evening dismissal of Marco Silva.

A packed Grand Old Lady resounded to the chants of “Duncan, Duncan Ferguson” as the home crowd whipped itself into a frenzy and cacophony of noise, despite the team lounging in the bottom three and the opposition riding high in fourth place.

Appearing relaxed in the Friday pre-match press conference, Ferguson enthused, “I am incredibly proud the manage the club, I’ve been here a very long time and it’s a big part of my life.”

Speaking of the task immediately ahead of him he said, “We have to try and get their performance up, make sure there’s a reaction from the past few games, and it’s my job to that. We want what everybody wants, we want to see a team that is fighting… with passion for the shirt. But, we have to be sensible too. Chelsea are a very strong team on the counter attack so we will have to be careful about when we are pressing.”

Asked what he expected from Goodison he added, “We want it rocking, we want the fans onside. It’ll be a great atmosphere on Saturday and we want a high energy performance from the team, I’m sure the players will be ready to perform. We believe they are good football players, they have to prove that on Saturday, and I’m sure they will.”

Ferguson confirmed that neither Seamus Coleman nor Fabian Delph would be available and that Yerry Mina was a slight doubt having picked up a knock in the loss across the park.

For what might be his only game in temporary charge, Ferguson named his starting line-up: Pickford, Sidibe, Holgate, Keane, Digne, Schneiderlin, Sigurdsson (c), Walcott, Iwobi, Richarlison and Calvert-Lewin.

For the visitors Chelsea, they arrived at Goodison as the second highest scorers in away games this season and seeking a sixth victory away from Stamford Bridge.

Chelsea manager Frank Lampard commented briefly, “Marco Silva tried everything for the club, and I’m sure he will go on to manage well elsewhere.” With a wry smile he added, “They might have an extra energy tomorrow as they rally behind the new manager.”

Lampard was expected to start Tammy Abrahams having substituted him in midweek against Aston Villa in midweek and had former Everton midfielder Ross Barkley available having recovered from illness.

Our referee for this midday kick-off was Craig Pawson.

The fairytale opening for Everton came on four minutes as a bright start saw a fine move stated by Sigurdsson finding DCL, his layoff to Richarlison was swept wide to Sidibe who curled the perfect cross into the six yard area where Richarlison rose to header powerfully past a rooted to his line Kepa, the perfect start.

The adrenalin was flowing both on and off the pitch as the home crowd responded the teams efforts in chasing every ball and not shirking from any tackles.

It was so nearly two nil on eleven minutes as Walcott sent in a teasing low cross at pace that was just to strong for either DCL or Richarlison at the back post to get on the end of.

A long clearance from Pickford was well controlled by DCL to play a one-two with Walcott only for his shot to be parried by Kepa and cleared.

It had been a good, positive opening from Everton but hearts where in mouths when a calamitous error by Keane presented Chelsea with their best opportunity of the half, that they somehow failed to take.

Chelsea were trying hard to get back into the game and a break by Willian saw him away from Digne and cross for Abraham whose flicked effort at the near post ran across the face of goal and wide.

Lucas Digne picked up the first yellow card for a pull on Willian as the Chelsea midfielder looked to break from his own half.

Sidibe was caught out of position just passed the half hour mark and Mount got to the bye line to cross with nobody there to get on the end of it.

Ross Barkley took to the touchline to warm up and was greeted by a chorus of boos ahead of some good defending by Mason Holgate to deny Pulisic.

Another long ball from Pickford found Iwobi and his cross from the left was behind both DCL and Richarlison and caught Walcott arriving behind them in two minds.

Pulisic got away from Sidibe to cause some concern in the Everton penalty area, Chelsea desperate to get level, Everton defending desperately.

Richarlison was booked for a foul on Kovacic in the 41st minute, and Everton were composed enough to see the first half through and take the early lead to the half time break.

No changes to either side for the second half that replicated the first with another quick start by the Blues, Chelsea failing to clear, DCL winning and aerial challenge over Christensen before spinning away to control and slide his shot across Kepa into the far corner of the net on 48 minutes.

Chelsea, stung by the second goal, hit back four minutes later, Kovacic beating Pickford into the bottom corner with a daisy-cutter.

This was now looking to be a tight game but Everton carved out two more chances for DCL and Walcott with Chelsea relieved neither could make the most of them.

Sidibe released Walcott with a great ball down the right flank and he should have played in DCL but chose to check and the chance was lost. Chelsea failed to make the most of a ball from Kovacic, well laid off by Abrahams with Mount shooting well wide.

Changes on 70 minutes saw Tom Davies replace a tiring Richarlison and Hudson-Odoi come on for Willian.

Both sides were now desperate, Everton to see out the game and Chelsea to draw level, both battling hard for every scrap of possession.

And incredibly, it was Everton who got forward with Tom Davies battling like crazy to somehow squeeze the ball through to DCL to slide home his second of the game. Cue delirium amongst the home faithful.

Theo Walcott came off for Bernard on 85 minutes.

Everton were standing strong and resolute in the face if Chelsea pressure and we entered six added minutes with no sense of this game going south. If adrenalin could be bottled, this was the game to have the bottling plant on stand-by.

There was certainly new manager bounce if not the full blown raw meat approach demonstrated by Everton as was exemplified by DCL chasing down Christensen deep into the added minutes.

At the final whistle, Goodison erupted and exulted as only Goodison can, while the centre of attention, Duncan Ferguson calmly shook the hand of Frank Lampard before turning to the Main Stand to punch the air.

He was understandably somewhat more animated when he took to the pitch for a standing ovation from the crowd who were bellowing his name to the accompanying music.