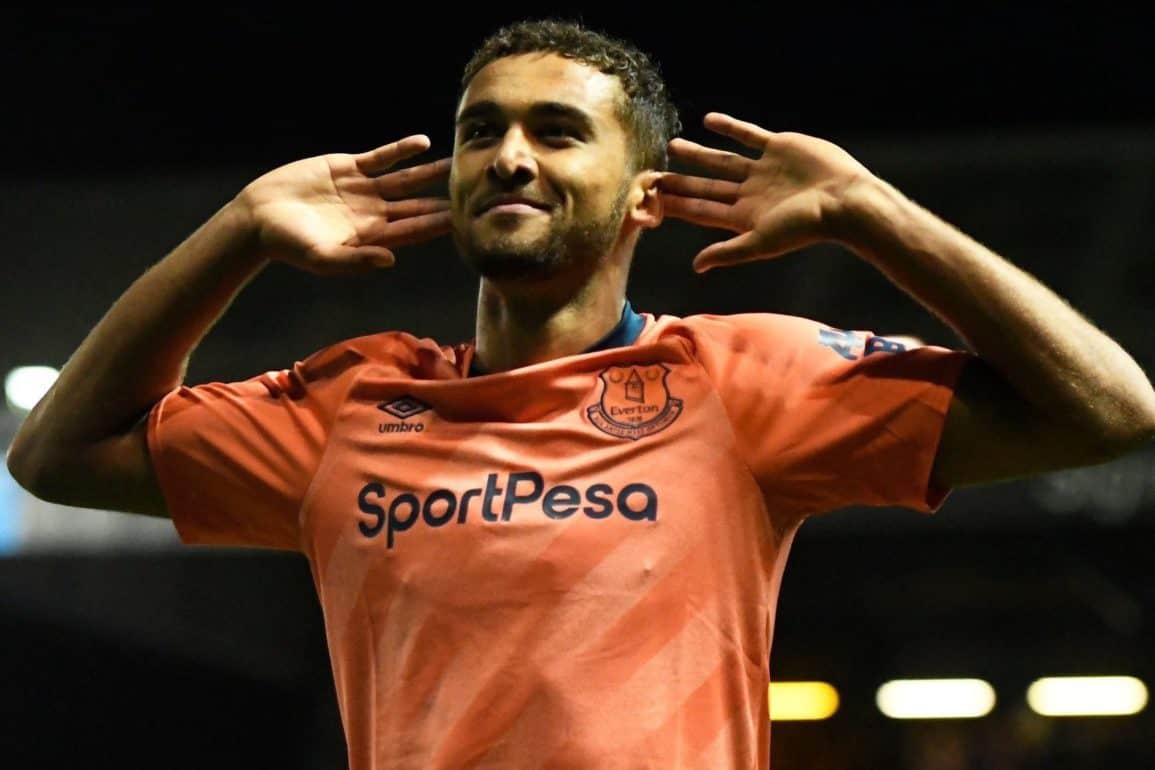 Dominic Calvert-Lewin, signed from Sheffield United, returned home to devastating effect as he bagged a brace inside ten minutes to sink Wednesday and put Everton on course for the fourth round draw.

Carabao Cup action is often seen as a respite from the pressures of Premier League play, but for Marco Silva and Everton, nothing could be further from the truth as they crossed the Pennines on Tuesday. Fresh from a home loss to Sheffield United on Saturday, Wednesday were waiting and smelling blood as they aimed to heap further troubles on an increasingly beleagured-looking Silva.

Recently installed manager Garry Monk was clearly looking forward to the Hillsborough tie having seen his side fight back to earn a draw at Fulham on the weekend and he commented, “They are a Premier League team and they are expected to come here and win. But we’ve had two games now under myself and we’ve gained points from them and showed good character, showed good qualities but there are things we need to get better at. In a sense, it is a free hit but we want to win and it’s as simple as that. We’re at home and we have to use that to our advantage. If we can show what we did in the second half on Saturday against Everton, then we’ll fancy ourselves to have a good chance but it’s going to be very difficult.”

Marco Silva reacted to Saturday’s defeat by telling his players, “It is not the moment for anyone to hide.” And belying the pressure on him, in a blistering statement he added, “I said it inside the dressing room, too [after the Sheffield United defeat] – there is nowhere we can hide, we have to show stronger character, personality. Unfortunately, in some moments, we didn’t see that. Now I don’t want anyone hiding, not me, not them. It is a moment for us to go and play football and to take responsibility as well.”

With champions Manchester City up next on Saturday at Goodison, Silva needed a reaction from his side to maintain progress in the cup and lift confidence for the Premier League campaign too. With another huge travelling support also having made the trip over the hills, in a far from full Hillsborough, Silva named five changes in his starting eleven: Pickford, Sidibe, Holgate, Mina, Digne (c), Davies, Delph, Richarlison, Iwobi, Bernard and Calvert-Lewin.

Our referee on a damp, greasy pitch was Jeremy Simpson.

An early chance came the way of the home side as Davies gave the ball away and Pickford had to be alert to rescue the situation, saving comfortably from Winnall to save the midfielders blushes. An Everton attack came to nothing as Murphy dispossessed Sidibe to break away and Sidibe duly hauled him down to receive a finger-wagging from the referee.

It was the Blues though – playing in their coral, some might say salmon pink, coloured shirt – who struck first on six minutes as Sidibe got forward at pace and in space on the right and his cross was perfectly lofted in for Dominic Calvert-Lewin to chest down and crash home a thumping right foot shot high past the giant ‘keeper Cameron Dawson via the underside of the crossbar.

Barely four minutes later, the Blues bagged their second with another good move with Alex Iwobi involved and it was he who slid a superb ball across and into the path of Dominic Calvert-Lewin and he finished confidently from six yards for nil-two.

The Blues were looking infinitely better than on Saturday and were unlucky not to add further to their tally as Digne swung in a corner but the header from Richarlison went just wide.

Richarlison took a knock on the quarter hour mark that needed treatment while Theo Walcott warmed up just in case the Brazilian was withdrawn. Another Wednesday foul saw Davies brought down in the act of finding DCL. Digne fired in the set piece with Dawson quick to claim before DCL could get to it.

The opening twenty minutes had flown by and but for that early Davies mishap, it had been almost entirely Everton in possession and dominating the game, boosted by the DCL brace. Another corner taken by Digne was cleared rather too easily, Everton really do need to work on these set piece opportunities, but I’m being picky now.

Wednesday won their first corner on a back of a mix up between Pickford and Mina and the cross to the back post saw a free header planted wide by Iorfa. Murphy than made a break to cross for Reach to get on the end of and thankfully his effort didn’t overly trouble Pickford. Two timely reminders that the game was far from done and dusted.

Having taken their foot off the gas for a few minutes, Everton got back to it with Delph on a strong, purposeful burst forward to feed Richarlison and his cross was met by DCL in space for the header that Dawson somehow turned away for a corner.

Wednesday were still plugging away and a through ball from Reach intended for Winnall was well read by Lucas Digne to play back to Pickford. Fabian Delph became the first player booked for a needless, heavy challenge on Reach.

Everton earned another corner as Reach got back quickly to block a shot from Bernard, the diminutive Brazilian having a decent half, involved in all areas of the pitch but again, the corner came to nothing.

An excellent sliding tackle by Mason Holgate denied Wednesday the chance to make the most of an error by Delph and the Blues ran down the clock to take a deserved lead to the half time break. Three attempts on target, all from DCL and two goals – get in!!

No changes by either manager saw Wednesday start the second half with Everton attacking the Leppings Lane end where close to five thousand Blues were encamped.

Not quite the explosive start to this half as the first, but Everton were moving the ball around well and as in most games this season, dominating the possession.

A decent move from the home side saw a cross well dealt with by Holgate but another unforced error from Delph allowed the home side a second attempt that saw Winnall shoot high when he perhaps might have been better trying to find a team mate.

On the hour mark, the first change was made as Wednesday withdrew Murphy in favour of former Cardiff forward Kadeem Harris.

Everton got forward again with Iwobi in the centre finding Sidibe for a cross intended for Richarlison to volley, but Wednesday were able to clear the danger.

The travelling fans were lending noisy support to the team as entering the last half hour, the home side began to try and up the tempo, trying to force their way back into the game. And the home side spurned a good chance as a free kick from the left was met by Winnall ten yard out, but he couldn’t direct his header on target, the ball sailing over the bar.

And that was his last action for Wednesday as he was replaced moments later by Jordan Rhodes.

Everton needed to stay tight at the back and look to punish Wednesday on the break, a third marker would surely end any hopes for the home side.

Marco Silva made his first change on 67 minutes, Theo Walcott replacing Richarlison, probably saving the Brazilian for Saturday and the Man City game.

Iwobi was having a decent game in the middle and was linking well with Bernard and another piece of play saw Bernard earn a free kick, that disappointingly saw Everton penalised as Digne sent it into the penalty area.

Garry Monk made his final throw of the dice sending Fletcher on for his captain Nuhiu with twenty minutes to play.

A smashing move involving Iwobi, Walcott, Davies and Delph sadly came to nothing as a heavy touch from Delph allowed Pelupessy to clear the danger. Everton carved out another decent opportunity as Sidibe got forward and into the area before pulling his low shot just wide of the post.

Everton made their second change with Gylfi Sigurdsson replacing the hard-working Bernard for the final quarter of an hour. The Icelander taking up station in the middle with Alex Iwobi moving wide left into the position vacated by Bernard.

Wednesday were still hopeful and Digne was needed to block a shot from Iorfa ahead of Fletcher heading meekly into the arms of Pickford.

Reach and Mina collided on the edge of the Everton area with the Columbian coming off the worst and needing treatment before being okay to continue.

Into the final ten minutes, and Wednesday won a late corner as Digne denied Rhodes and DCL was there to head clear. Former Everton youngster Thorniley broke from midfield to feed Reach for a shot from distance that flew wide of the target.

A free kick led to Digne chancing his arm with a shot from wide out left, taking a deflection but flying wide for another corner that again came to nothing.

Everton were now looking to see out time, retaining possession and running down the clock safe in the knowledge that progress in the competition had been secured. Morgan Schneiderlin appeared for a brief four-minutes of added on time cameo role replacing Fabian Delph.

Could Everton add a third goal cherry to the cake of victory?
Sadly no, but a much needed victory had been won, and the players had responded to the managers pre-match challenge.