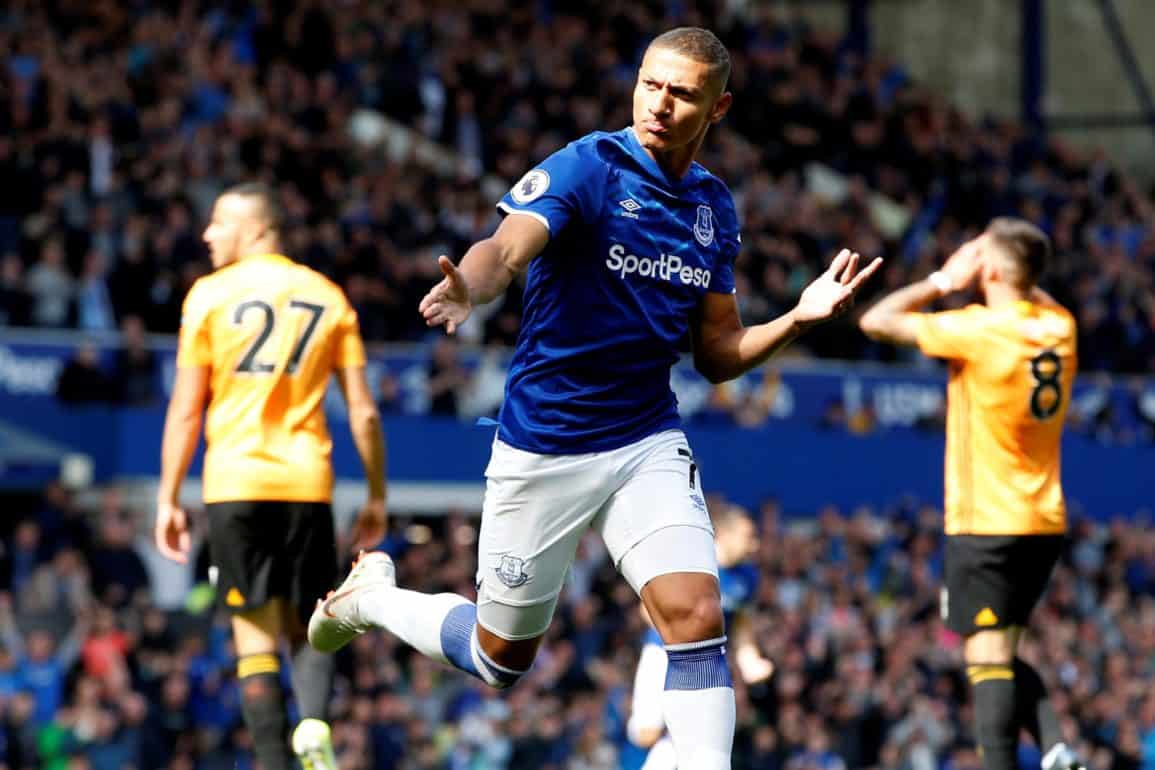 Richarlison at the double and Alex Iwobi see Blues back to winning ways.

An explosive opening twelve minutes saw three early goals and set the tone for an entertaining game that saw two more second half markers, a flurry of yellow cards and one red, as the Blues kept up their good home form from last season.

Following their midweek Carabao Cup success over Lincoln, Everton returned home to take on in-form Wolves, fresh from their victory over Torino and progress to the group stages of the Europa League.

The Blues wanted to maintain the scoring form they showed against the Imps and victory over Wolves would go some way to erase the bad memory of the corresponding fixture last season that saw the Midlands outfit take all the points.

With Jean-Philippe Gbamin sidelined for at least another seven weeks, the Blues were hoping Fabian Delph would be ready to make his league debut after an impressive showing in midweek. With no other injury worries, manager Marco Silva had an otherwise full squad to select from.

“We have to be at our best level, like always in the Premier League,” said Silva in his Friday press gathering. “We know all about Wolves, they had a very good season last time and this will be their third season with almost all the same players together. They know each other and have changed nothing this season.” He added, “They are strong on the counter-attack, they will be solid and waiting for the opportunity to counter to try to cause us problems. It is up to us to play in our way, how we like to play. We must have a good balance – prepare well in attack and be ready when we lose the ball because in those moments they are really strong.”For this Sunday afternoon clash, Marco Silva opted for a starting eleven of: Pickford, Coleman (c), Keane, Mina, Digne, Gomes, Delph, Sigurdsson, Richarlison, Iwobi and Kean.

The visitors arrived at Goodison in good fettle after a three draws in three games start in the league, and an impressive Europa League campaign so far. For a number of years, supporters and media alike have suggested the Thursday-Sunday game scheduling works against clubs, but Wolves seem to have banished that thinking to the rubbish bin.

And Wolves manager Nuno Espirito Santo, with three wins from three games he’s coached against Marco Silva, was hoping his players would help him maintain his form and with Raul Jimenez in a rich vein of scoring form, seven in his last seven starts, this promised to be an interesting encounter.

In team news for the visitors, Adama Traore was looking for his first league start of the season while Ryan Bennett, Matt Doherty and Ruben Neves were all looking for a recall after being rested for the win over Torino in midweek.

The follically challenged Anthony Taylor was the referee entrusted to maintain order on a breezy, sunny afternoon in front of other sold-out Goodison Park crowd.

A steady opening to the game saw the Blues carve out the first half chance as Digne fed Iwobi who checked, stepped inside and placed a fine cross onto the head of Sigurdsson who couldn’t quite get the right direction on it.

Wolves from the restart committed the cardinal sin of over-playing at the back and when Patricio muffed a back pass from Coady under pressure from Moise Kean, Richarlison was on hand to sweep home his first league goal of the season on five minutes.

Wolves hit back just over three minutes later though as Traore got down their right flank and away from Digne to cross low into the six-yard area where Saiss was on hand to stab home the equaliser as Everton failed to clear their lines. (The first goal the Blues had conceded at Goodison since the 0-2 loss to Man City last February.)

In this quite explosive opening, Everton regained the lead inside another two minutes as Richarlison lifted the ball over a defender to find Sigurdsson on the right and he planted a perfect cross to the back post for Alex Iwobi to open his Goodison account with a header back across the face of goal.

Crikey this was end to end stuff as Wolves got forward again in numbers and Pickford was forced into a good stop to deny Cutrone on his Wolves debut, and then did well to hold onto the resulting corner kick.

Gomes with a ball into the Wolves area for Richarlison saw it fall nicely for Coleman but his shot was deflected out for a corner to the Blues. Wolves cleared and a long ball from defence found Cutrone but he blazed his shot well wide of the target.

Richarlison went down on 17 minutes after a challenge with Boly, needing treatment on his right shin while Bernard warmed up as a precautionary measure.

Wolves were almost caught out by a quick cross from Coleman that was cleared and immediately sent back in by Sigurdsson looking for the head of Kean, Coady conceding a corner that saw Mina head straight into the arms of Patricio.

Another decent move saw the Blues work the ball right to left with Sigurdsson again looking for Kean with his cross, Patricio happy to smother at his near post.

Delph was becoming more instrumental in midfield with his calm, assured approach to the game and a ball out to Richarlison saw Vinagre pick up the first yellow card for a heavy challenge on the Brazilian. Wolves seemed happy to rely on quick long balls out of defence and Jimenez was caught offside leading to cheers for the linesman who the home crowd thought had missed a couple previously.

Jimenez was booked shortly before the interval for impeding Digne in the act of taking a throw-in ahead of Keane being somewhat harshly adjudged to have fouled Cutrone.

A half that had started at a hundred miles an hour came to a quiet conclusion with the Blues ahead by the odd goal in three.

After Everton halted a mazy run by Vinagre, Sigurdsson with a deft ball released Richarlison who was unceremoniously felled by Boly who was duly booked.

A through ball from Sigurdsson intended for the overlapping Seamus Coleman saw Boly get away with a sly pull of the arm and VAR apparently chose not to see it either.

Gomes to Delph to Iwobi saw his thread a ball in towards Kean whose quick turn didn’t fool Coady who cleared hastily to thwart the dreadlocked striker. A minute later, Kean did get away from Coady, but Bennett and Boly closed the door on him before he could get a shot away.

Ryan Bennett became the fourth Wolves player to see yellow for a blatant obstruction of Digne and Wolves made their first change, Moutinho replacing Saiss in the 59th minute.

Another foul on Richarlison saw Sigurdsson lift the free kick into the area for Kean to climb, but plant his header over the bar.

Fabian Delph was next in the book for a foul on Jimenez, the free kick from Moutinho easily dealt with. Iwobi did well to get away from Traore but his pass for Richarlison went astray. Good work at the back from Andre Gomes saw his dispossess Jimenez to set the Blues going forward again, but Wolves packing the midfield stopped their progress.

Neves went through the back of Sigurdsson right under the nose of the referee who nonplussed the crowd by not showing him a yellow card. Wolves made their second change of the afternoon replacing Cutrone with Jota.

Into the final twenty minutes and Everton needed to defend well as Wolves began to put them under pressure before Kean looked to break away, Boly standing on his foot and Kean losing his boot in winning the free kick. Sigurdsson again was the taker with Boly clearing as far as Digne whose shot was deflected for another Blues corner.

The introduction of Moutinho and Jota had seen Wolves playing more football on the deck as against the long-ball tactics of the first half, and Everton needed to stay alert to the danger. And they didn’t heed the messages as a long throw-in from Bennett was nodded on by Boly for Jimenez to finish bravely at the back post for 2-2 on 75 minutes.

Marco Silva made immediate changes with Calvert-Lewin and Bernard replacing Kean and Iwobi for the final fifteen minutes.

This game was now there for the winning and five minutes after being tied up, a superb cross from the left wing corner flag by Digne saw Richarlison climb to beat Boly and plant a firm header into the bottom corner for his second of the game.

Coleman rampaging fed Richarlison on the right and he cut in to bend a shot that Patricio did well to palm out.

Wolves weren’t finished though and Neves saw a shot cannon out for a corner off Keane, Delph defending it well to clear his defensive lines. Neves was then replaced by Neto as Wolves made their final change.

Everton were finishing the stronger with Gomes doing some fine work in midfield where Delph and Sigurdsson had both had fine games for the Blues. Another excellent corner from Sigurdsson found the head of Mina, Patricio going full length low to his right to deny the Columbian.

Five added minutes were signalled by the fourth official to set up a nervy finale. Coleman was brought down by Neto and the Blues used the free kick to force another corner that came to nothing.

Neto was booked for his second foul in quick succession as he brought down Richarlison to eat up a few more valuable seconds. In the final minute, Richarlison was then clearly body-checked by Boly and referee Taylor had no option than to show him a second yellow and the red for his discretion.

Six home wins on the bounce for Everton was signified by the sharp blast of the referees whistle and the Blues will take heart from two victories in the week.