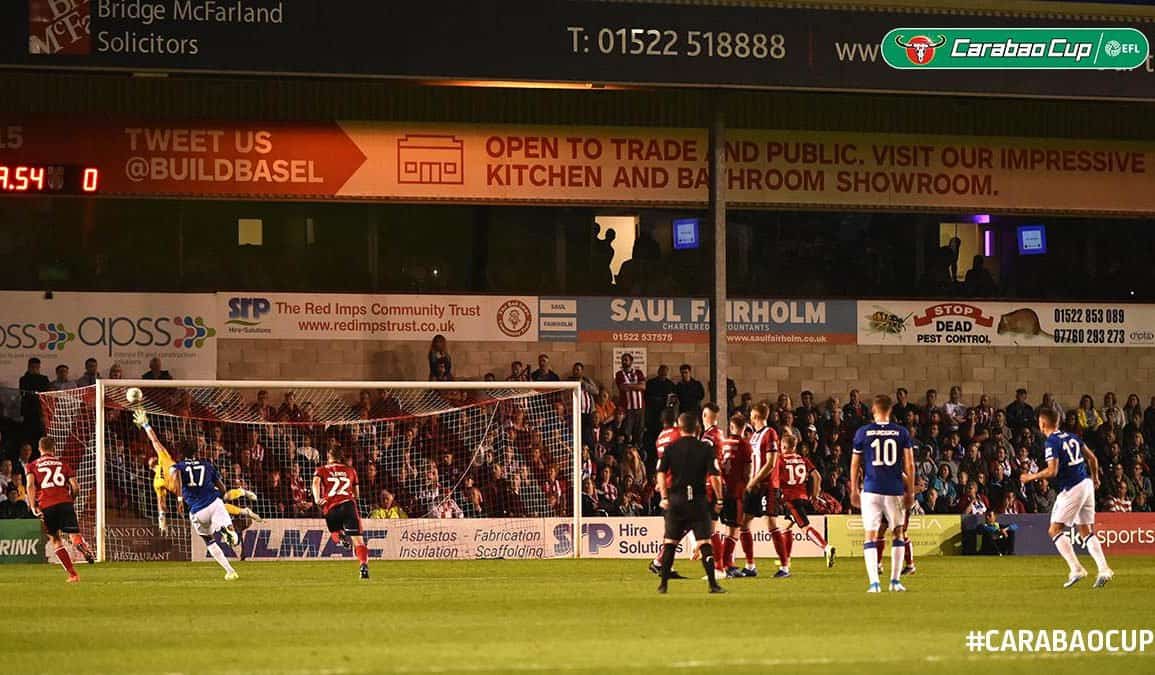 Everton survived going behind to a first minute strike to put in a professional performance and gain progression to the third round of the Carabao Cup with a dominant showing in a well-contested and entertaining game that saw quality goals from both sides.

Everton began their Carabao Cup campaign on Wednesday evening with a visit to Sincil Bank, home of League One Lincoln City. The Imps are no strangers to the Blues having given us a stiff test in the third round of last seasons’ FA Cup at Goodison when in took markers from Bernard and the now departed Ademola Lookman to stifle their giant-killing aspirations.

In five previous meeting with Everton, Lincoln’s best result was a 1-1 draw in 1954, the Blues winning the other four encounters between the two clubs. And with no VAR or extra time for this game, if it were to be tied at 90 minutes, we’d go straight to the lottery of penalties.

Under Danny Cowley, Lincoln ended last season Champions of League Two and took their good form into the Carabao Cup, winning at Huddersfield in the first round and prompting the Terriers to dispense with the services of head coach Jan Siewert.

And Cowley had clearly set his sights on causing another cup upset when he addressed his pre-match press conference. “We looked back at the video from the game against them last season, there is lots of learning to take from that game and we still have around 90% of the group still here. They are a Premier League team with world class players and a world class manager who will provide a real test for us. We are looking forward to the challenge ahead of us, you always learn against the best players and best teams. It will be a real test for us, there is no hiding from that but we are really excited about the test Everton will provide.”

On being advised that Marco Silva appeared ready to field a full-strength side, Cowley added, “We are pleased, we want to play their very best team. It is a competition they can realistically win even if they bring their second level players which includes the boy from Juventus, Moise Kean, Theo Walcott and Alex Iwobi. They have a huge amount of depth from their recruitment this summer.”

Looking bounce back from a disappointing first loss of the season last Friday evening at Aston Villa, Marco Silva was without Jean-Philippe Gbamin, out for upto eight weeks with injury, but was hoping Fabian Delph would be available for selection.

The Blues have never won this competition under any of its many names and with the prize of silverware and European qualification on offer, Everton fans everywhere were desperate for the team to get this season’s campaign off to a winning start.

In his pre-match press gathering Marco Silva noted, “Lincoln is a team we know very well, we played against them last season, and they know us well. Playing in this competition for us we are going to play with our maximum ambition. We are going to go step by step, but with full ambition in this competition to do something special. Maximum respect to our opponents, and to the competition as well. If we want to do something special in both cups, the most important is tomorrow because we are here now.”

Pushed by the media as to whether he would shake up his squad following the loss to Villa, Silva responded defiantly, ”It doesn’t make sense to make rotation just for the sake of making a rotation. We will play with the eleven that I think is the best eleven to win the match.”

Our referee, for what all Blues hoped would not be a banana-skin match, was Darren Bond.

Everton off to the worst possible start as with only twenty seconds on the clock, Payne pounced on indecisive defensive play between Keane and Delph to get to the bye line and pull his cross back perfectly for Anderson to score adroitly into the top corner giving Jordan Pickford no chance.

A through ball from Iwobi for Digne saw the left back go down on the edge of the Lincoln penalty area but referee Bond was having nothing of the half-hearted appeals for a foul. Delph was beginning to spray balls around and one laid back to Sigurdsson by Sidibe saw Everton win a tenth minute corner.

Smith in the home goal reacted well to parry a Sigurdsson effort on the end of a left wing cross from Digne as Everton dominated the possession after conceding the early goal, before a second corner from the left came out to Sigurdsson, but his shot sailed harmlessly over the crossbar.

A dangerous and quick counter attack by Lincoln saw Andrade get free on their left but his cross was much too strong for Akinde to get on the end of.

Delph with another pinpoint ball found Digne who laid the ball back for Iwobi to thrash in a shot that Smith was happy to turn away for a third Blues corner that came to nothing as Delph was off balance when shooting and the ball skewed away for a throw-in.

Richarlison trying to feed Kean through the middle saw Shackell concede another corner that saw a Keane header cleared at the back post and the Blues kept the pressure on as Sigurdsson lifted the ball into the Lincoln area for Kean but his effort was easily smothered by Smith in the home goal.

A clearing header by Keane found Kean and his quick feet almost took him away from the Lincoln midfield, but it took a foul to halt his progress. Digne with another floated cross saw Richarlison go down in the area, again no penalty was the decision as the ball went out for another Everton corner.

Everton were spreading the ball wide to stretch the home defence but they were defending resolutely and defended another corner well before Keane rose at the back post only to head straight at Smith.

Just past the half hour mark, Akinde beat Holgate to a header and the ball fell for Andrade who took his shot early but wide of the target.

A poor challenge by Morrell on Sigurdsson saw tempers close to fraying as Delph and Holgate both voiced their displeasure. The 35-yard free kick that resulted saw a fantastic shot from Lucas Digne fly around the wall and into the top corner for a deserved and spectacular equaliser.

Lincoln won their first corner in the 37th minute that the Blues struggled to clear before Andrade fired a weak shot that Pickford handled easily. The Blues raced down the other end and Moise Kean, found out wide on the right, took on the home defence before crashing a shot against the near post.

A quick ball out to Iwobi from Pickford saw the former Arsenal man get forward quickly to feed Richarlison who bent his shot narrowly wide of the target from the edge of the penalty area. Richarlison then pounced on a mistake by Bolger to gain the area but again place his shot way off target.

A foul by Schneiderlin gave the Imps a free kick dead centre and thirty yards out, but the shot from Andrade hit the well constructed wall and the Blues cleared easily.

After the initial shock of the first minute goal, Everton had responded well, dominating the possession and forcing a host of half chances before the peach from Digne sent the teams to the half time break with the score tied.

Neither manager made any changes for the second half that began in teeming down rain with the Blues attacking the end where their travelling army of fans were congregated.

Kean on the right fired in a low cross for Iwobi that was cut out and cleared for a corner that saw Keane and Kean have headers and shots blocked and cleared.

Everton had started the second half the way they’d played all of the first period, totally dominating the possession, moving the ball around trying to work openings and restricting Lincoln to rare counter attacks – the only missing element was the all too vital one, quality finishing.

Andrade was booked for a foul on Sidibe as he tried to break forward and Marco Silva looked to make his first change with Cenk Tosun stripping off his track suit. However the Turk was soon back in his seat as Everton were awarded a penalty in the 58th minute as Schneiderlin drove into the penalty area and was clearly brought down, Gylfi Sigurdsson sending his spot kick high to the goalies left as he dived low to his right.

Another rumpus ensued with Pickford needlessly racing the length of the pitch to become involved, Shackell, Sigurdsson and Pickford all seeing yellow for their involvement.

Lincoln made two immediate changes for the restart, Bostwick and Eardley replacing Shackell and Morrell respectively, and five minute later, Lincoln made their final change Payne replaced by Grant.

A flowing move started by Sidibe and relayed through Richarlison to Iwobi again saw the new signing unlucky as his shot beat Smith and the outside of the far post.

Right on the 70-minute mark, Lincoln struck an incredible equaliser as Eardley found space on the right to cross for Akinde and the ball came out from a header by Keane to Andrade who hit as perfect a volley as you could wish to see, a quite stunning goal !!!

This game was now set for a thrilling finale and in the 74th minute, Silva made his moves with DCL replacing Fabian Delph and Tosun finally coming on for Moise Kean.

Smith in the home goal seemed affected by cramp, but with all his substitutes used, Lincoln manager had no option than to hope he could play on. Luis Boa Morte also saw a yellow card for arguing too strongly over the delay while Smith received some treatment.

Eardley drew another corner as Holgate deflected a speculative shot wide and Lincoln kept looking to find Akinde with high balls into the Everton area.

Everton took their second lead with ten minutes to play, Sigurdsson getting to the bye line where he crossed to the back post for Tosun to intelligently head back perfectly for Alex Iwobi to open his account with a close range header.

Theo Walcott came on for Iwobi before the restart from which Lincoln piled forward with the pouring rain as their back looking to tie things up again.

A fine header from Holgate released Richarlison for a run on the left flank where he eventually drew a free kick for a foul by Anderson that saw him yellow carded.

And Everton added a late insurance goal as Sigurdsson found Digne on the left, he beat his man and centred a superb cross for Richarlison to bury an emphatic header beyond Grant Smith.

Lewis was booked in added on time for scything down Richarlison.