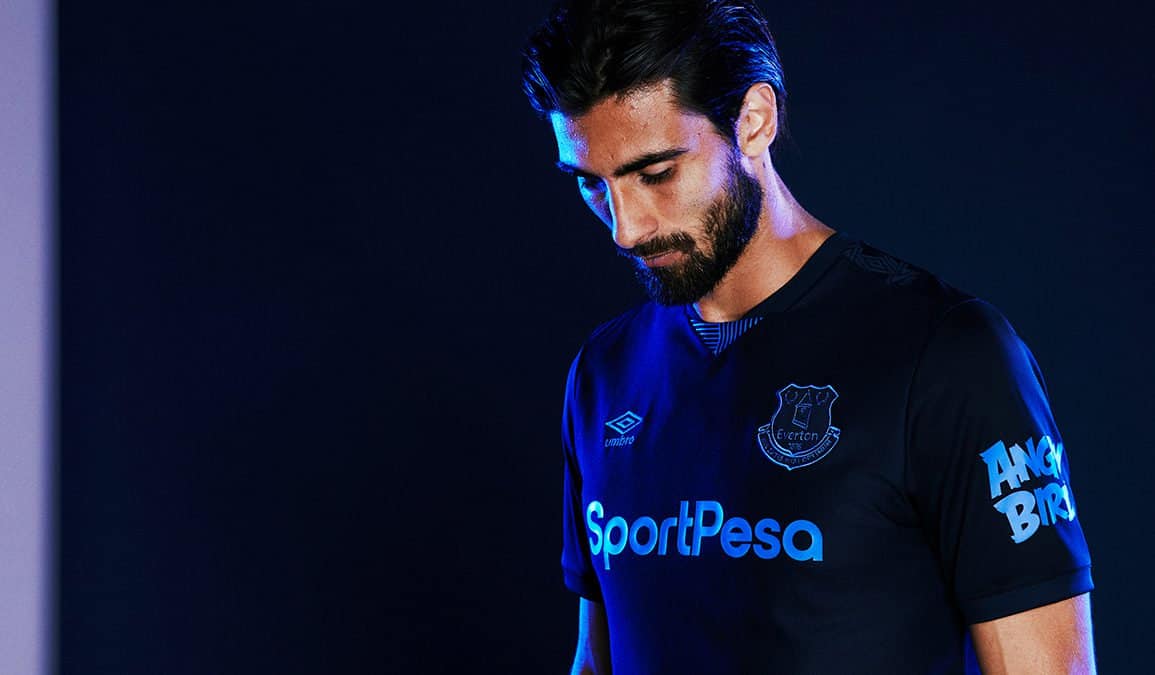 Everton and Umbro have revealed a sleek dark navy design for the Club’s third kit for the 2019/20 season.

The launch of the third kit will give another chance for Evertonians to grab a limited-edition St. Domingo shirtzine. Volume 1 and 2 of the shirtzine proved to be hugely popular after supporters scoured Merseyside last month looking for the numbered editions, which were dotted in key locations across the region, and have since become collectors’ items. The Shirtzine will also be available for fans to enjoy in digital format, across the Club’s platforms.

Everton midfielder Andre Gomes, the cover star of Volume 3 of the St. Domingo Shirtzine said: “This kit is a classic, it looks really good and I think it will give us a presence on the pitch and one that is very wearable for the fans.”

Designed to be worn on and off the pitch the shirt is constructed from lightweight durable fabrics with a comfortable fit. The jersey can not only withstand the pressures of the modern game, giving players freedom of movement but can also be worn on the terraces and in a social environment with the contemporary design and dark colours offering flexibility as part of an Evertonian’s casual wardrobe.

The dark navy shirt features a stylised V neckline and drop-hems – a modern twist on kit collars from the 90s – with ‘dazzling blue’ coloured stripes on the front neck as well as highlighted on the crest and sponsor detailing.

The shirt is completed by ribbed sleeves, customised Umbro shattered diamonds across the shoulder panels and an ‘EFC’ signature on the back of the neck, a feature from the Club’s 1992/93 shirt which can also been seen on this season’s home and away jerseys.

Accompanying the jersey, the dark navy shorts feature black contrast side panelling along with a ‘dazzling blue’ coloured crest. The socks complement the shirt and shorts and are dark navy with a black turnover, which integrates a cotton footbed and instep cool zone technology to improve breathability and comfort.

The new 2019/20 third kit completes the Toffees’ modern collection alongside the Club’s blue home and bright coral away strips that were both revealed last month.

Supporters can order the new third strip now by going online at evertondirect.com or visiting Everton One or Everton Two stores.

Alan McTavish, Commercial Director at Everton Football Club, said: “Following on from the successful launch, and record sales, of our home and away kits – we are confident that this fantastic third kit will prove to be just as popular.”

Robin Dunn, Head of Performance at Umbro, said: “This is a shirt for everyone, and has been developed on genuine insight from the Club and most importantly the fans. Back in 2017 when we carried out the fan survey, it was clear that there was a desire for black and dark based coloured kits and with the strong home and away jerseys, that link to the Club’s historical colour pallet, the third shirt completes the line-up for the 2019/20 season. The modern, lifestyle jersey is designed to look great on and off the pitch.”

The St. Domingo Volume 3 shirtzine features exclusive interviews with Andre Gomes, who talks about his footballing career and his journey to Goodison Park, Leighton Baines on welcoming new players to Everton and his love of photography and a look back at some of Blue’s most memorable away night games.