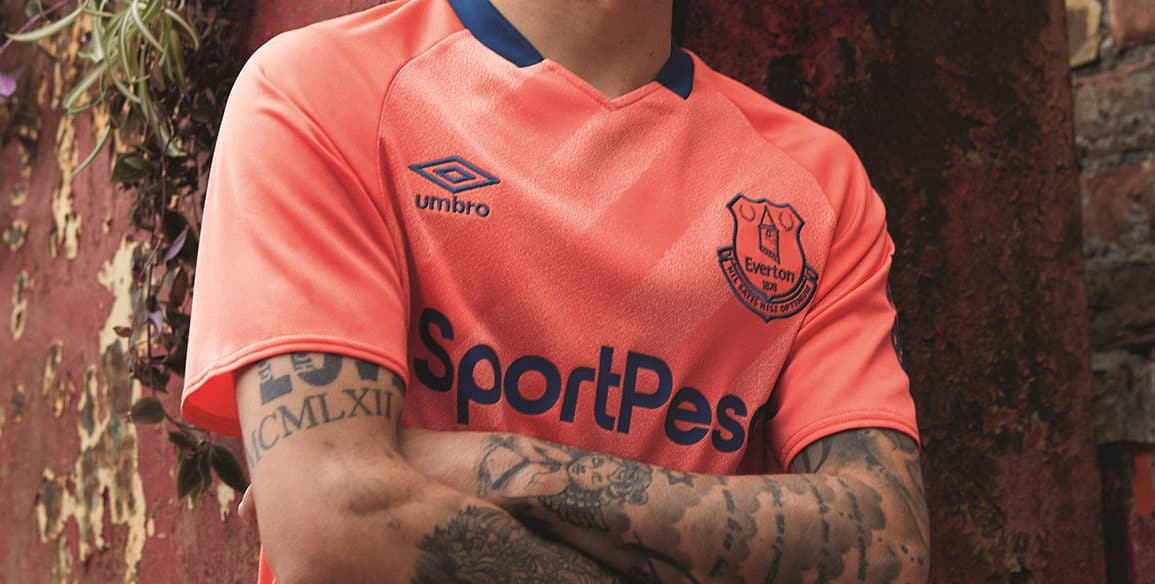 Everton and Umbro have revealed the Blues’ striking new coral and navy away kit for the 2019/20 season – taking inspiration from two of the Club’s earliest strips.

The dominant colour of the 2019/20 away kit – Living Coral – takes its cue from the kit worn by Everton for the Club’s first league title-winning season in 1890/91. A salmon-coloured kit was worn by the team throughout that campaign – and came 11 years before the permanent adoption of royal blue jerseys in 1901/02.

The new shirt also features a distinctive two-tone coral sash design, echoing the design synonymous with the black and scarlet sash kit that earned Everton the nickname ‘the Black Watch’ in 1881.

The 2019/20 away kit is available to pre-order online from 9am at evertondirect.com and from Everton One and Everton Two Stores from Wednesday 24 July. It will be available in stores from Thursday 1 August.

The new 2019/20 away shirt features a navy blue half-collar effect while echoing this year’s home kit with a back of neck ‘EFC’ sign-off detail.

The away kit has been designed to be functional on the pitch and to appeal as everyday lifestyle wear for fans.

In images to accompany the launch, Lucas Digne, Theo Walcott and Bernard model the kit at multi-purpose arts and music venue Constellations in Liverpool’s Baltic Triangle.

Everton forward Theo Walcott is a fan of the new away kit, saying: “I’m into this kit. It’s clean looking and also feels really good and lightweight. No one can say they won’t be able to see their teammates on the pitch, that’s for sure. Let’s hope we can deliver the goods wearing it throughout 2019/20. It’s great to see the technical developments of the kits each year.”

Alan McTavish, Commercial Director at Everton Football Club, says: “For the 2019/20 kit, Umbro has taken inspiration from our earliest strips. They have combined modern colours with performance-enhancing material and a strong reference to our history, producing a stunning away kit.”

Robin Dunn, Head of Performance at Umbro UK, says: “We knew that this particular colour would strike a chord with the Everton fans as they have a familiar history of salmon and coral coloured strips. We took inspiration from previous kits and added a twist to the traditional stripes, with a two-tone diagonal front jacquard.

“As we head into the summer months and holidays on the horizon, we hope that this vibrant kit will be showcased far and wide, and will also travel well with the first team this upcoming season.”

Lucky fans can again get their hands on a limited-edition St. Domingo away kit shirtzine to mark the launch. Volume 1 became an instant collectors’ item with Blues’ fans eager to find one of the numbered editions placed around Merseyside.

As well as interviews with Bernard and Lucas Digne talking about the team’s mentality on the road and the importance of away support, St. Domingo vol. 2 celebrates the fans who travel far and wide to support Club, with features on Everton’s travelling fans and a look back at classic away days for the Blues over the years.

Readers can also enjoy an interview with Merseyside band The Coral’s Jack Prince in Barcelona, while Theo Walcott, Georgia Brougham and Taylor Hinds explain how important it is to have an inspiring away kit.

Only 1,000 copies of St. Domingo vol. 2 have been printed and will be distributed around key locations in Merseyside. Fans can also keep an eye on Everton’s social media channels to win a copy.