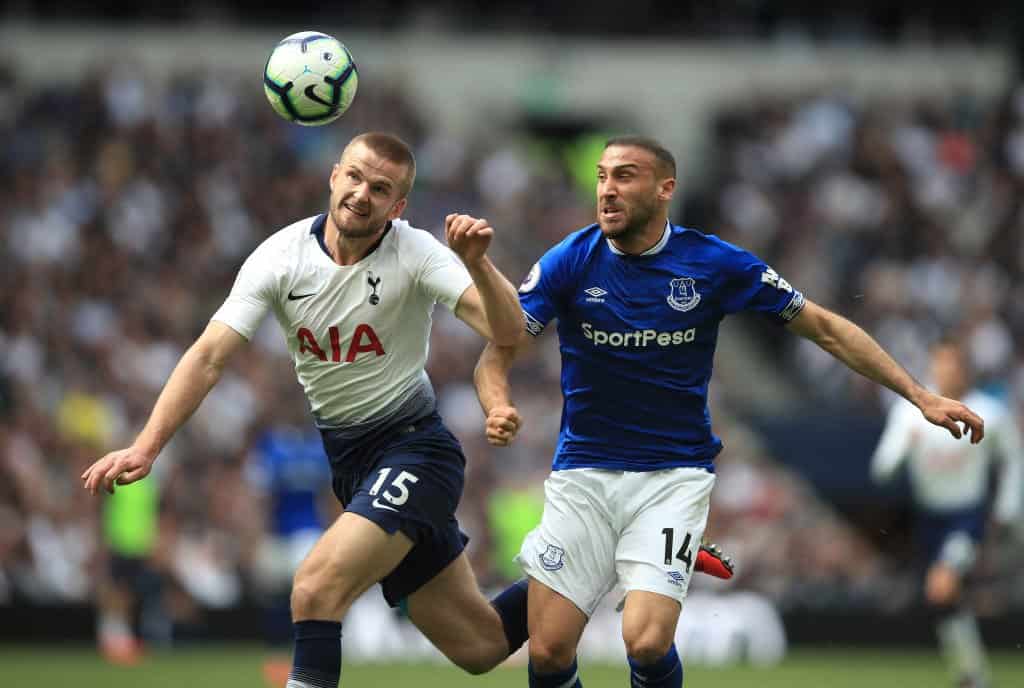 An entertaining finale to the season for Everton saw them battle back from an early setback to lead on goals from Theo Walcott and Cenk Tosun, but an excellent free kick from dead-ball specialist Christian Eriksen saw the spoils shared.

Everton closed out the season with a final awayday in London to face Spurs in their new White Hart Lane stadium with the home fans still basking and reflecting in the glory of their team having reached the Champions League final.

From the moment Lucas Moura struck his hat-trick tie-winning goal against Ajax, Evertonians on social media had been pleading with Blues players to wear slippers on Sunday so as not to risk injuring any Spurs players ahead of their June 1st date with ‘them’.

Spurs and manager Mauricio Pochettino would have been forgiven had they opted to rest and protect all their first team squad and play their Under-14s, but they were looking for a win and hoping Chelsea did no better than draw at Leicester in order that they could finish third in the final Premier League table.

The Spurs manager did have something of a selection headache with Son and Foyth both suspended following red cards at Bournemouth last weekend, together with Vertonghen sidelined with an ankle injury and doubts over the fitness of Rose and Wanyama.

Speaking ahead of the game, Pochettino commented, “We are in a moment, living a dream. It’s difficult to be in the reality. It’s our responsibility to create the atmosphere of competition because Sunday is an important day for us. We must believe that we need to win on Sunday. Our objective must be to finish third. That’s the way we need to take the game and then what happens, happens.”

Meanwhile for the Blues, Marco Silva also had selection issues to mull over having confirmed in Friday’s press briefing that Calvert-Lewin would not be available, Richarlison was also ruled out of contention with a rib strain and skipper Seamus Coleman was advised as being ‘doubtful.’ He also had to consider re-instating Andre Gomes to the midfield where Morgan Schneiderlin has deputised really well while the Portuguese was suspended.

With Everton supporters nervously awaiting news of developments surrounding the future of Gomes – a target for opponents Tottenham – and Kurt Zouma, Silva was keen to dispel Spanish newspaper reports that Gomes has already agreed terms on a permanent move to Spurs. “The only feedback I hear from now is from Andre and what he said to me. Our relationship is really honest. He hasn’t decided anything about his future, and his agent neither. I’ve already said about our talks with him and [Kurt] Zouma also. Now it’s up to us to show our ambition.”

For the final game, in a bright, sunny afternoon, our referee was Andre Marriner.

With a re-jigged defence seeing Kurt Zouma in a somewhat unfamiliar left back role, Spurs were quickly on the front foot and opened the scoring inside three minutes from their first corner as Mina failed to get to the cross and the ball fell invitingly for Dier to finish from six yards – a disastrous start for the Blues.

With their tails up, Spurs looked to press home their early advantage, Walkers-Peters doing well down the right side and then Moura, coming in off the right, firing over from 25 yards.

The Blues first attempt came from a free kick lofted into the Spurs penalty area by Sigurdsson with the header from Keane sadly straight at Lloris in the home goal.

An unfortunate slip by Keane saw Alli find Lamela and he repaid the compliment as Alli raced into the middle to take the pass but send his shot from the edge of the box just over the crossbar.

The Blues second attempt again didn’t overly trouble Lloris as Walcott shot awkwardly straight at him from twelve yards after Bernard had got free on the left and crossed behind Tosun.

A lovely turn by Bernard saw him make space and send a great ball forward for Tosun to chase, but the Turk was somewhat harshly adjudged to have fouled Alderweireld.

The next Blues raid saw Walcott find Sigurdsson on the right, but his cross into the centre couldn’t find Tosun and Spurs cleared all too easily. Everton were working hard and a decent move begun by Zouma at left back, involving Sigurdsson and Tosun, ended with Lloris going full length at his near post to deny Bernard when a curler to the far post might have been more profitable.

On 33 minutes, Moura won the ball in midfield to find Alli and another decent interchange between him and Lamela saw Alli drag a shot wide of the target. Bernard went down after a stiff challenge by Lamela and the resulting free kick saw Digne cross for Keane again to beat the Spurs defenders to the ball, but his header went wide.

From a throw-in, Tosun found Sigurdsson and the former Spurs player took aim and tested Lloris from 25 yards, the French ‘keeper happy to hold onto the dipping shot.

Terrific support from the travelling fans was reverberating around the new White Hart Lane and the Blues were boosted, forcing Spurs back and Bernard finding Walcott for a shot that was hurriedly blocked and cleared by Dier.

Everton survived a nervy moment when a misplaced clearance by Keane was picked off by Lamela, but his pass for Alli was too strong and ran out of play for a goal kick.

As one added minute was indicated, Everton won a free kick just outside the Spurs penalty area as Walcott brought down, Digne hitting the wall and the ball eventually going out for an Everton corner which, as with rather too many this season, came to nothing.

Spurs with a half time change saw Wanyama replace Deli Alli in midfield, and they began the second half as they did the first, on the front foot, Walker-Peters sending a centre from the right across the face of the Everton six-yard area.

Play was held up while an idiot encroaching on the field was apprehended and unceremoniously removed by four stewards.

A fine ball from Digne found Walcott on the right, but his shot was quickly blocked and cleared with Everton working hard to regain possession and win a free kick for a foul on Schneiderlin. A foul by Wanyama gave Everton another free kick in a promising position, but again the cross from Sigurdsson was poorly placed and Spurs were able to clear with ease.

Lucas Digne did really well to snuff out a threat down the left as Moura and Lamela tried to work an opening while at the other end, Walker-Peters showed his speed and composure to blunt an Everton raid. He then transgressed with a clumsy challenge on Tosun and was a little lucky not to see a yellow card for his trouble.

Players were slopping and losing their footing on the slick, new pitch and both Bernard and Gana Gueye lost their footing trying to create something down the left flank. From the right, Walcott headed the ball into the path of Tosun and his first time ball fell nicely for Bernard but he couldn’t direct his shot on target.

An hour gone and it was still the early Dier strike that separated the two sides, and moments later cheers rang around from both sets of fans as news of a third Man City goal came through.

Everton made their first changes on 64 minutes, Andre Gomes replacing Idrissa Gana Gueye, and Ademola Lookman coming on for Bernard.

And the changes worked as Gomes spread a long ball out to Digne who played it inside for Lookman. The youngster went one way then the other before finding Theo Walcott who slipped in the act of shooting, but got enough on the ball to beat Lloris inside his far post on 69 minutes.

On the balance of play, the equaliser was well deserved, the question now was could Everton go on and find a final day winner.

And it came two minutes later as a left wing corner found Keane again for a powerful header that was blocked on the line but Cenk Tosun was able to bundle the ball over the line for 1-2.

Disappointingly, the lead was short lived as directly from a free kick three minute later, Eriksen beat both the wall and the diving outstretched fingertips of Jordan Pickford for 2-2.

Would there be one final twist in this entertaining finale to the season as both teams seemed intent on not settling for the draw.

A pull back by Lookman on Walker-Peters gave Spurs another free kick that Eriksen feinted to shoot but clipped to the near post area where Gomes was happy to head behind for a corner, while at the other end, a fine cross from Digne saw Cenk Tosun rise to send in a good header, but Lloris gathered safely.

Gomes twice found Zouma on the right wing for crosses, the first blocked, the second winning a corner that Digne swung in looking for Keane again at the back post, Lloris gathering to set Spurs going forward again in this end-to-end tussle.

Into the final minute and a challenge by Janssen left its mark on Kurt Zouma ahead of Digne being booked for a similarly poor challenge on Walker-Peters.

Two added minutes were signalled and Everton won a free kick that saw Sigurdsson find the head of Yerry Mina, but Spurs were able to clear and this entertaining game ended all square, and rightly so, at 2-2.