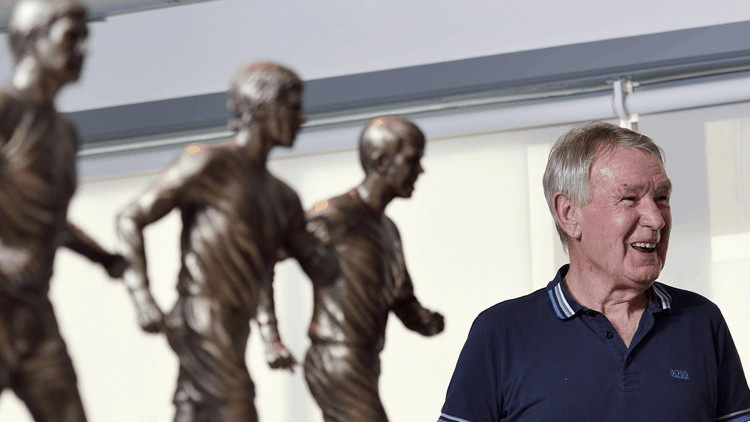 Holy Trinity Statue to be unveiled

A statue celebrating the illustrious Everton trio of Alan Ball, Howard Kendall and Colin Harvey will be officially unveiled before Everton’s final home game of the 2018/19 season.

Everton legend Colin Harvey and his family, the families of Alan Ball and Howard Kendall, Everton Fans’ Forum members and club representatives will attend the unveiling ceremony, which takes place at 5pm on Friday May 3, before the Blues take on Burnley.

Blues’ fans attending the game against Burnley that evening will also be able to watch the unveiling, and flags with images of the three players will be displayed in the ground (Howard Kendall Gwladys Street End, Sir Philip Carter Park End and Family Enclosure).

Everton Fans’ Forum has worked closely with the Club to create and locate the new statue, which will stand proudly outside St Luke’s Church on Goodison Road.

The statue has been sculpted by Tom Murphy, who also created the Club’s statue of Dixie Dean.

The figures of the three Everton legends are mounted on a triangular base, set against re-used cobbles from the existing street to reference how the area looked when the trio played at the Club in the 1960s and ‘70s.

Harvey joined Everton as an apprentice in 1960. Ball signed from Blackpool in 1966 – the same year he was part of England’s World Cup-winning side – while Kendall joined from Preston North End a year later.

Ball, Kendall and Harvey were widely regarded as the best England midfield trio of the late 1960s and early ‘70s and were integral members of the team which brought Everton league title glory in 1970. Ball left for Arsenal in 1971 – his £220,000 transfer fee breaking the British record.

After success on the pitch, Kendall and Harvey went on to become the most successful managerial team in Everton’s history, leading the Club to two league titles (1984-85 and 1986-87), an FA Cup (1984) and winning the European Cup Winners’ Cup in 1985.

Gary Evans, current Chair of the Everton Fans’ Forum said: “The idea came about through a combination of things. The iconic image of Ball, Kendall and Harvey used on the main stand got fans talking about their successes and when Howard Kendall sadly passed away, this seemed to galvanise fans and the Club even more to think of a way to honour them.

“I think that the statue will become a new meeting place for fans before the game. Its location means that as people walk toward the ground on the Goodison Road side, no matter which street they use, they should get a glimpse of the statue, and a reminder of our achievements as a club.”

Nick Mernock, former Chair of the Everton Fans’ Forum, who played a key role in the inception of the project and is still part of the Forum said: “It’s extremely exciting to finally be in a position to unveil the statue to our supporters. It’s been a long journey to bring the project to completion, involving many members of the Fans’ Forum and supporters over the past three years. I’d like to thank the Club and the families of these three great players for their backing and contributions on many levels to ensure this fitting tribute.

“As a Forum, we saw how other iconic statues at away grounds encouraged discussion between grandparents, friends, parents and young people. This statue will help ensure that the legacy of these three Goodison Park greats is talked about for generations to come. To play a small part in bringing this statue to Goodison Park is an absolute dream come true.”

Made up and all that but why the end of the season @Everton 🤔 pic.twitter.com/gXlSKkJxw1