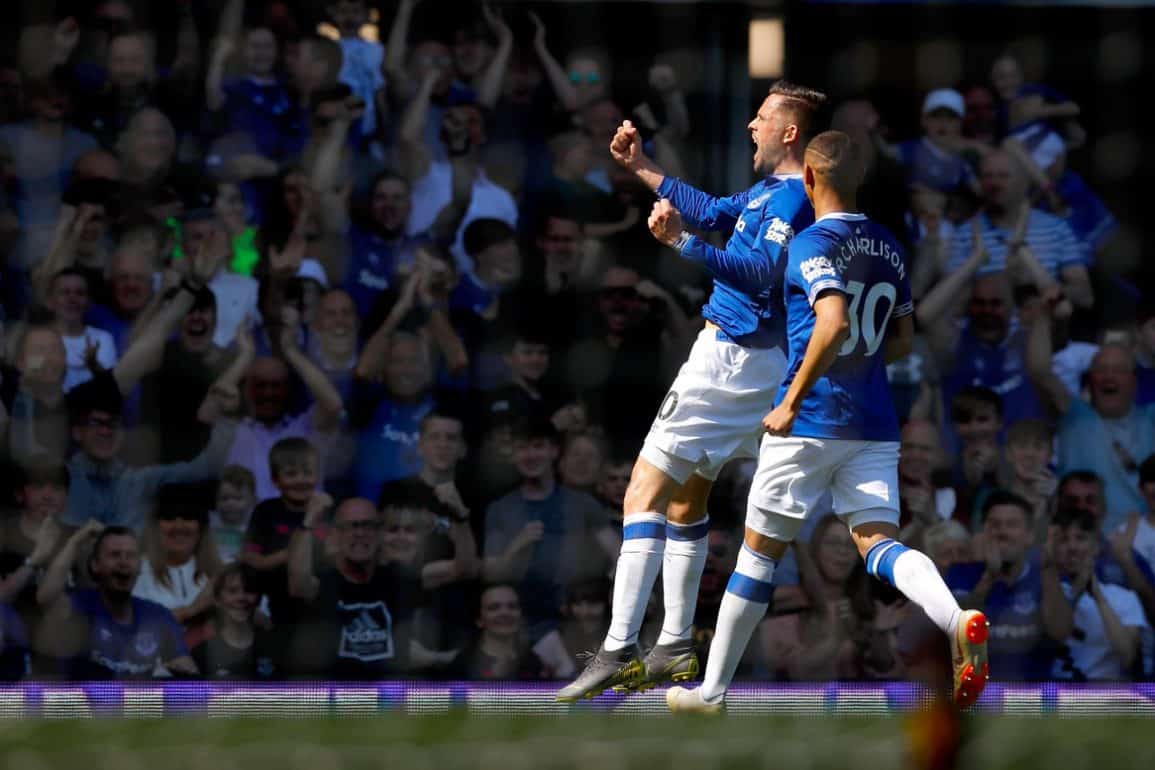 Everton continued their excellent home form of late with an absolutely magnificent thrashing of Manchester United. This was the style and pace of football Goodison has been renowned for down the years as the visitors were simply blown away by some exhilarating attacking play and four top quality goals.

Following the poor performance last weekend at Craven Cottage, Everton took on north-west neighbours United looking to get back to winning ways. The nature of the loss at Fulham was all the more perplexing given the form showed in the three previous outings against London opposition.

And things got worse for the Blues when influential midfielder and crowd favourite Andre Gomes was given a three game suspension for his ill-advised challenge on Mitrovic late in the game at Fulham.

Manager Marco Silva had two major decisions to make – whether to bring Michael Keane back to partner Kurt Zouma at the heart of the defence, and whether Tom Davies or Morgan Schneiderlin should look to fill the hole in the midfield.

In his press briefing Silva referred to the loss of Gomes saying, “Andre is a fair and honest player, enjoying what he is doing, but some moments happen. It’s always tough to play against a player like Mitrovic, but we have to keep our emotional balance. I’ve already spoken to him because it will be tough for us and him to stay out of the next three matches.”

In the visitors dugout, newly appointed manager Ole Gunnar Solskjaer had the task of lifting his sides spirits following the dismantling they suffered in midweek at the hands of Lionel Messi and Barcelona.

He too had a suspension to deal with, Luke Shaw ineligible for selection, but he did have Nemanja Matic and Alexis Sanchez together with Ander Herrera to possibly bring in.

The Norwegian, whose time as interim manager was hugely successful, has found the permanent role somewhat more testing and in his pre-match press conference he admitted as much. “We know we have to be realistic here and we know we have a job to be done. There’s no quick fix, it’s not like we buy seven players and suddenly we’re in the right shape, we are where we are.”

Goodison has been a happy hunting ground for United since the inception of the Premier League and for this encounter, Solskjaer opted for a line-up: De Gea (c), Lindelof, Smalling, Jones, Dalot, Fred, Matic, Pogba, Martial, Lukaku and Rashford.

On a warm, sunny April afternoon, our referee was Paul Tierney

An excellent first 45 minutes from the Blues saw them dominate the visitors from start to finish and thoroughly deserve the two goal lead at the interval.

A decent opening saw Everton with three corners in the opening ten minutes as Silva appeared to have set Everton up to pressure Dalot at left back.

The third corner from the left taken by Digne came all the way across for Gana Gueye to cross back in from the right and find Richarlison who saw his shot well saved by De Gea and the Brazilian was unlucky to see his follow up effort go just wide.

From a Lucas Digne long throw on the left, Everton opening the scoring in the 13th minute as the ball was headed on and Richarlison spectacularly volleyed home giving De Gea no chance.

Another throw in from Digne caused more concern in the United defence, the long bombs becoming a very useful offensive weapon for the Blues.

On 19 minutes, a long ball from Pogba found Rashford but his first time effort with the outside of his right boot sailed harmlessly over the bar.

Gana Gueye was booked for a foul on Fred on 22 minutes, but when Fred hauled down DCL a minute later, no card was brandished in his direction.

United won their first corner on 27 minutes and it served as the springboard for Everton to launch the attack that brought a stunning second. Gana Gueye gather the ball and sent it diagonally towards Sigurdsson who controlled and took a quick look around to assess the situation before taking a couple of paces forward and letting fly from 25 yards, beating De Gea low to his left.

Everton were comfortably on top and raiding at will with the visitors defence scrambling to cope with the Blue waves of attack. Phil Jones went down on 39 minutes needing treatment for what some thought was a strained fetlock.

Slack play by Dalot saw Sigurdsson play in Richarlison but his shot from a tight angle was straight at De Gea. Dalot then brought down Richarlison from behind and again, the referee chose not to show a yellow card.

Richarlison needed a bit of treatment for what looked like a knock in the ribs and the Blues left the field at half time to a deserved standing ovation.

Untied changes for the second half saw Young and McTominay replace Jones and Fred respectively.

Richarlison went down early in the second half and Everton widely withdrew him to prevent further injury, Theo Walcott his replacement.

Everton continued their attacking intent and a smashing combination between Bernard and Digne down the left saw the cross just behind DCL and just too far in front of Sigurdsson.

More excellent passing and movement saw the Blues win yet another corner as Smalling deflected a shot from Sigurdsson wide. Sigurdsson took the kick, De Gea punched it clear and Lucas Digne hit an unstoppable volley from 20 yards for a magnificent third on 56 minutes.

Everton were now carving United apart and another corner taken by Sigurdsson was bound directly for the net only for De Gea to get a boot on it to clear.

A throw in at the Park End by Digne saw DCL head on for Sigurdsson and his perfectly ball threaded through to Theo Walcott saw him comprehensively beat De Gea for four nil on 64 minutes.

Martial took a Salahesque dive under pressure from Coleman and the referee waved the silly penalty appeals away before booking McTominay. Martial then found a way into the Everton area but blasted well wide.

Gana Gueye received a standing ovation when he was withdraw on 75 minutes for James McCarthy who got a marvellous cheer as he returned to the first team.

With a sun-drenched Goodison baying for a fifth goal, the blues couldn’t quite oblige, but nobody was that bothered as they’d witnessed a display of everything good about this club, and on this form, the Grand Old Lady, rattled to its foundations by the home crowd, is well on the way to becoming a fortress again.

Has a bit of infamy gone to @chicoazuls head? Haha