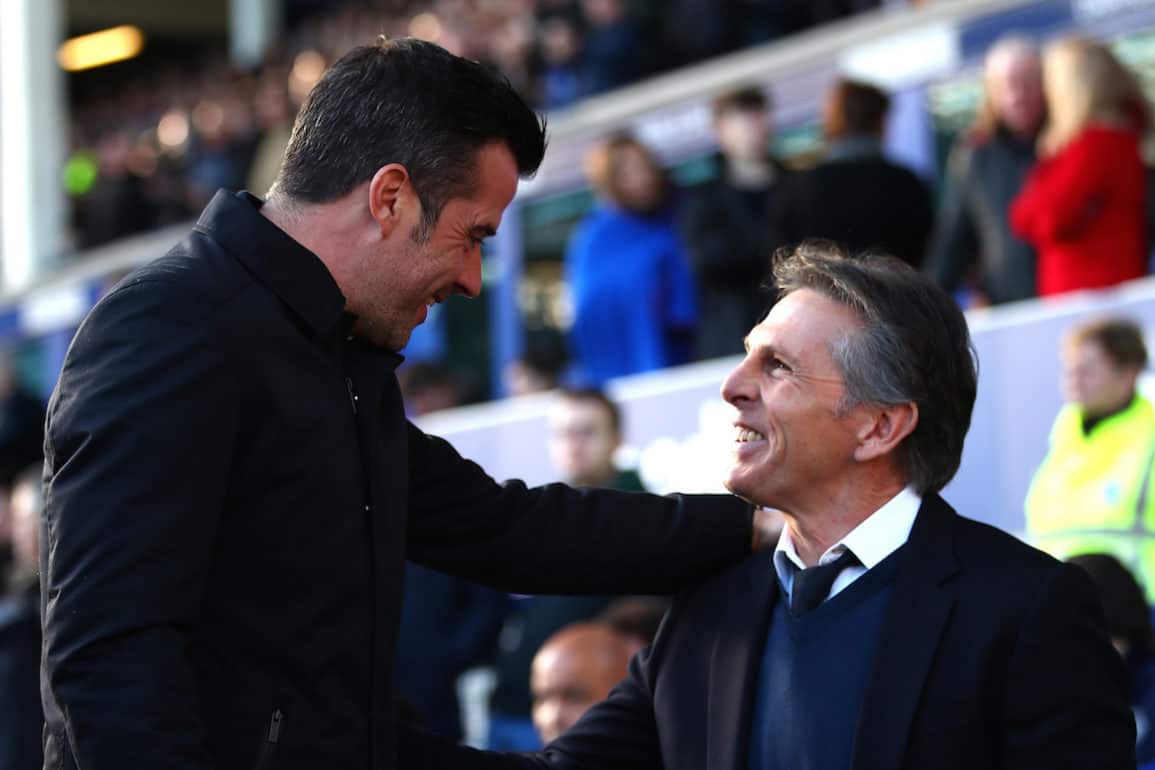 A lightning quick charge by Jamie Vardy proved the decisive moment of another disappointing home game for and by an Everton side who looked jaded throughout.

New Years Day footie with a truly insensitive kick-off time that suits TV companies far more than the fans in attendance saw Leicester City the visitors to the Grand Old Lady and Everton looking to secure their first double of the season.

Playing our fourth game in just ten days, the most congested schedule of the festive period saw boss Marco Silva comment, “we don’t have time to prepare in the normal way, but it’s the schedule and we have to put in our players’ minds how important the next game is.”

Brazilian Richarlison was expected to be fit after suffering a knock in the disappointing loss away at Brighton and many Blues fans were hoping Ademola Lookman might be fit to start having missed three games with an ankle injury.

For the visitors manager Claude Puel, still looking to win over sections of the Foxes fan base, had fitness concerns over Jonny Evans and Wes Morgan while Hamza Choudhury who was rested for the defeat to Cardiff was in line for an immediate return.

On their fourth outing in eleven days, Puel spoke in a similar vein as Silva when he remarked, “sometimes, this situation arrives. We will see the players available for, the recovery and the rest. We want to try to have a good intensity in our performance against Everton.”

For the first game of 2019, Goodison offered a lukewarm welcome to our referee, the ever unpopular Martin Atkinson.

A bright, sunny early afternoon saw a very relaxed pace from the start with the first meaningful action being a nice layoff by DCL to give Walcott a chance to stretch his legs and run at the heart of the visitors defence. But Evans and Chilwell were able to nullify the attack and clear.

Richarlison and Sigurdsson combined on the left to eventually see Digne fire in a shot that cannoned to safety without troubling Schmeichel.

The next left flank attack saw Digne find Sigurdsson only for his fine through ball into the area to be too far ahead of Walcott.

Everton were having the better of the early exchanges and a Leicester giveaway gave Sigurdsson the chance to feed Digne with the shot hitting Evans for half-hearted appeals for a penalty ignored by referee Atkinson.

The best chance of the half came just before the twenty minute mark and started out left with Gomes finding Richarlison to feed Digne for the cross that went right across the area for Kenny arriving late to smash a shot that hit the crossbar.

Mendy lost possession for the visitors and from a Kenny cross, DCL saw his powerful header wide of the target.

Ghezzal had the Foxes first attempt at goal shortly afterwards with a low shot that Pickford gathered safely.

Pereira dispossessed Walcott to run 40 yards before Keane made a solid defensive tackle to blunt the attack. Kurt Zouma fell awkwardly into the advertising at the Gwladys Street end, but was only winded momentarily.

A Leicester corner on 41 minutes saw Ghezzal swing the ball to the back post for Maguire to head back into the danger area, but Pickford easily dealt with the second header from Evans.

Pereira then skipped away from midfield challenges by Gana Gueye and Gomes, but his long range shot flew high and wide.

A half that Everton had the best of without unduly troubling Schmeichel petered out, possibly an indication of mental and physical fatigue for both sets of players over the festive period.

Leicester made a change for the start of the second half, Albrighton replacing Ghezzal.

A poor start to the second half by Everton saw Pickford over stretch to tip away a right wing cross from Simpson amidst a host of misplaced passes and general lack of cohesion.

Despite a spell of pressure that really didn’t trouble the visitors, a clearance from Schmeichel led to the opening goal as the ball fell nicely to Vardy to get away from Keane and finish precisely across the face of goal and beyond Pickford on 57 minutes.

Gomes chipped the ball forward into the box for Walcott to head back into the path of Sigurdsson but his rising shot cleared the bar.

Everton were having more possession but showed far too little quality in the final third and Schmeichel was largely untroubled behind a defence well marshalled by Evans and Maguire.

Cenk Tosun replaced Theo Walcott with twenty minutes to play and it was the Turk who had Everton’s first real shot on target with a fierce drive that Schmeichel punched clear where Evans brought down Richarlison and was booked.

Chilwell ventured forward and with the Everton midfield and defence standing off him, he reached the edge of the area but couldn’t find the power or direction in his shot to beat Pickford.

Digne was booked on 79 minutes for a professional foul on Albrighton.

The home crowd was understandably getting frustrated with the lack of cutting edge from the Blues as they continued to fail to find a telling pass or a cross to beat the first man.

An added-on time corner from the left by Digne saw Tosun get onto the header by Keane, but Schmeichel made himself big to deny the Turkish forward at close range.