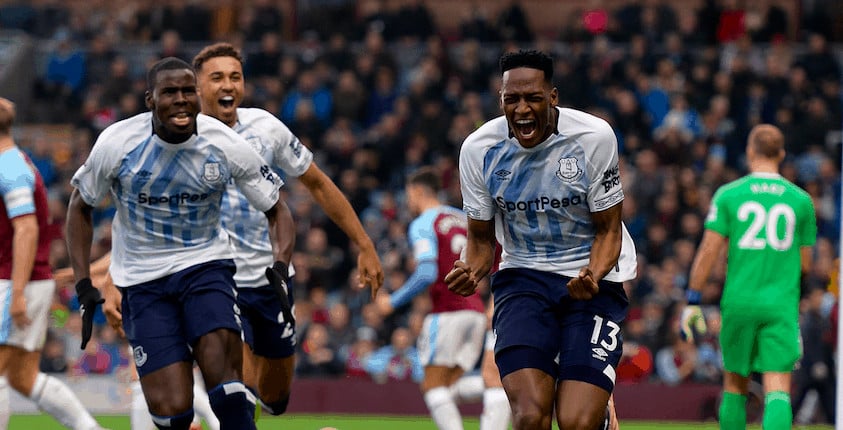 Digne at the double as Everton go nap to banish the blues.​

A blistering opening twenty minutes saw Everton open up a three goal lead on goals from a Yerry Mina header, a stunning Lucas Digne free kick and a Gylfi Sigurdsson penalty. And Lucas Digne capped a fine personal performance adding a second marker in the second half as the Blues got back to winning ways.

Turf Moor was the Boxing Day setting for two clubs desperate to get back to winning ways after disappointing losses in their pre-Christmas games. Burnley travelled to London to take on Arsenal and were beaten 3-1 but, with a blatant penalty denied them and the Gunners third goal seemingly offside… we’ve had some of that this season at the Emirates too.

Everton meanwhile were licking their wounds after an embarrassing hammering at Goodison by Spurs with what appeared a perfectly good goal for Dominic Calvert-Lewin ruled out for an innocuous push and a calamitous collision opening the door for the visitors to steamroller through with clinical efficiency.

So to Boxing Day and Burnleys’ gravel-chewing voiced manager Sean Dyche noted, We can’t be pleased with the league position because we have to win games. But there is life in what we are doing.” However, with three wins in their last four games and three wins in their last four home games against the Blues, the Burnley boss will have been hoping that trend could continue.

Everton made the short trip to East Lancashire looking for their first win in six games and hoping to kick-start their stuttering season, especially in the wake of that hammering by Spurs. Marco Silva had injury doubts hanging over Gana Gueye and Andre Gomes, and with Yerry Mina expected to return, a choice of who to drop from Keane and Zouma or whether to go with all three in a back five.

Silva commented, “It will be good for us to have another match so quick and we have to give a different answer next time against Burnley. We have to keep together and realise how we achieved results before.”

With Everton needing one more goal to be the first club to score 7000 goals in top-flight footie, someone of the following starting line-up was on the verge of making and writing their name into history and Everton folk lore: Pickford, Digne, Zouma, Keane, Mina, Coleman (c), Gomes, Sigurdsson, Walcott, Bernard and Calvert-Lewin.

On a cool, dry afternoon, our referee was Michael Oliver.

What a start from the Blues… Seamus Coleman won a right wing corner, Lucas Digne swung it over, Burnley could only clear as far as Bernard and his left wing cross back to the edge of the six yard box found the head of Yerry Mina – one-nil Everton inside two minutes !!!

Everton had started brightly with Bernard at the centre of the early play, looking to take men on and get crosses into the box too.

A sweet turn by Bernard created space for him to find DCL and he was clearly impeded by Lowton to earn a free kick that Lucas Dignefancied, took and bent superbly around the wall to beat Joe Hart at his near post for the Blues second in the 13th minute.

Burnley were lucky not to concede another dangerous area free kick as Walcott chased a ball and appeared to be brought down by Gibson, right on the edge of the penalty area, but Michael Oliver decided otherwise.

Zouma lunged in on Cork to concede a free kick that Everton clearly comfortably enough as Burnley tried to get back into the game having been shaken by the two early Blues strikes.

Tarkowski, closed down well by Bernard, was quick to get back and deny the Brazilian a strike on goal with DCL waiting for the pass. However from the resulting corner, on twenty minutes, Turf Moor was stunned and everyone a bit surprised as Michael Oliver awarded Everton a penalty for handball against Mee and Gylfi Sigurdsson stepped up to send Joe Hart the wrong way and fire the Blues into a three goal lead.

Sigurdsson saw yellow for an innocuous foul on Mee ahead of Lowton going down theatrically from a nudge by Bernard to win a free kick that Everton defended comfortably.

Lowton was booked for a late tackle on Digne and then Andre Gomes saw yellow for a foul on Westwood just before the half hour mark, and the free kick saw a clash of heads between Gibson and Seamus Coleman that saw both players need treatment before rejoining the play.

Pickford made his first save of the game tipping a Barnes header away for a corner that was swung to the back post where a header from Gibson – on his Premier League debut – appeared to be cleared off the line, but the referee decided otherwise and the goal was given.

Bernard slipped on the greasy surface and eventually limped off the pitch nursing what looked a groin strain, but he came back on to see how it felt in the remaining few minutes before the interval.

A fine move saw Gibson defend well to deny Walcott as he burst into the box on the end of a ball from DCL.

Burnley were pressing Everton hard trying to deny the Blues any space and Gibson was again in the thick of things again as he brought down Walcott and he too went into the referees notebook of yellow cards.

Burnley went for route one football in the four minutes of added-on time, but Mina, Keane and Pickford from a corner kept them out to see Everton take the half time lead.

Sean Dyche obviously used his half time team talk to urge his side to get forward and quickly and they took him at his word, forcing the first attacked that saw Pickford claim the right wing cross to clear and try to get Everton away on the break.

From a Burnley free kick that was initially cleared, Hendrick lifted the ball into the box and Everton breathed a sigh of relief as Tarkowski spooned a gilt-edged chance high over the bar

The game was certainly getting a bit more physical and Tarkowski was somewhat fortunate not to get booked for a foul on Bernard. Everton weren’t panicking and continued to play their passing game, looking for the openings to hopefully add to their first half tally.

Gana Gueye appeared on the touchline to warm up just before the hour mark, an indication that Marco Silva might try to shore things up a bit further in the midfield area.

DCL played a sweet one-two with Walcott and was unlucky not to get on the end of the cross as the ball fizzed across the face of the six yard area.

Burnley prepared a double change with Gibson and Hendrick being replaced by McNeil and Gudmundsson respectively in the 63rd minute.

A fine run by Bernard through the middle saw Taylor make two outstanding challenges to deny Sigurdsson and then Coleman as Everton looked to regain the three-goal margin, ahead of Mee getting away with a push on Keane as he tried to get on the end of a Walcott cross.

Marco Silvas’ first change was to replace DCL with Richarlison on 67 minutes, and a mazy run from the Brazilian nearly brought a fourth goal, Michael Keane heading just over from the resulting corner.

Into the final twenty minutes and a suer ball from Sigurdsson caught the Burnley defence sleeping and allowing Walcott to nip in, Joe Hart making a key stop. But the respite was only momentary as the corner was cleared only as far as Bernard who fed Lucas Digne and he sent a powerful, accurate shot through a crowd of players and well beyond the reach of Joe Hart for 1-4.

The introduction of Richarlison was stretching the Burnley rearguard and with the three goal margin restored, Marco Silva gave Andre Gomes an early finish, Gana Gueye coming on for the final fifteen minutes.

Tom Davies stripped off for the final ten minutes, replacing Bernard who had worked hard and very effectively throughout – can’t wait for him to bag his first goal.

Burnley to their credit kept going and Mee, on the end of a lofted ball, fired a ball right across the face of goal, just to far in front of Barnes sliding in at the back post. Gudmundsson bent a free kick over the bar after a free kick for hand ball was given against Gana Gueye.

Three added minutes were added as Gana Gueye went into the book for simulation when it looked more like he’d stumbled than dived.

So the Blues got back to winning way and in some style as they capped a fine awayday in added-on time as Sigurdsson threaded a terrific ball through for Richarlison to control and fire past Hart with the outside of his left foot almost in one movement.