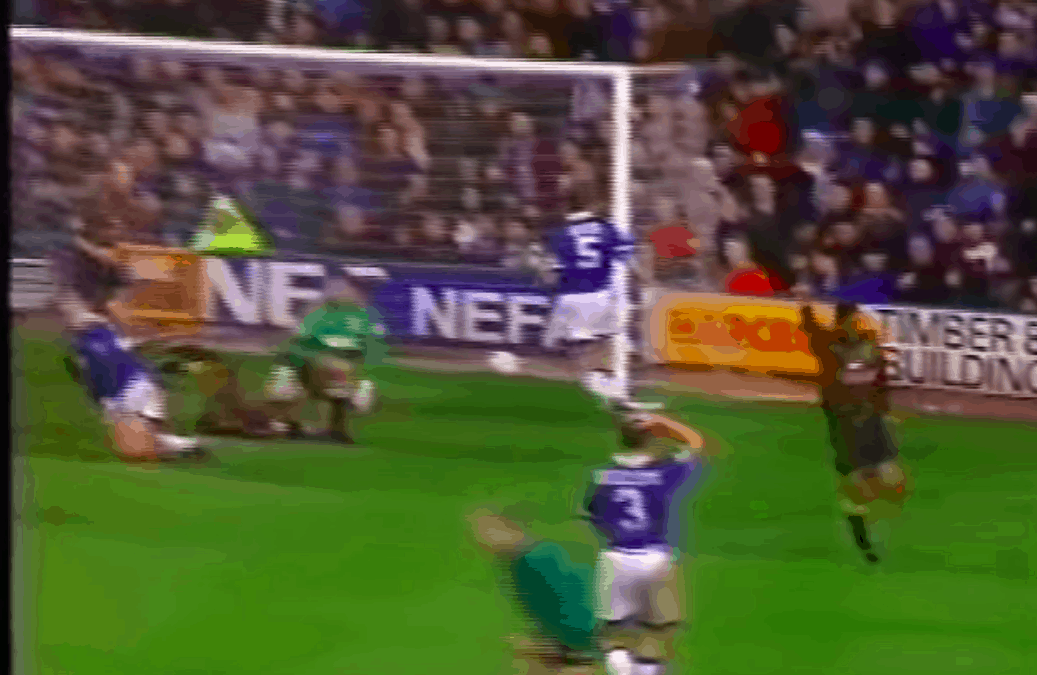 Even for a fan who has sat and stood through his fair share of dross watching Everton over the decades, for some reason, one game always sticks out.

This was the season of the ‘Dogs of War’, who at that point in the campaign were just beginning to make their mark.

Evertonians had just been through what was probably the worst run of form the club had endured since it had come back up in the 1950s. It was a slump presided over by the calamitous Mike Walker.

Just a month earlier, the Blues had been bottom of the league, having amassed a miserly seven points from the opening thirteen games. This dismal form had picked up from where the previous season had left off, one which had seen a near-death spiral in its closing stages.

You could label it relegation football, but to include the word ‘football’ in any description of that era would be misleading. What Walker produced was beyond ‘football’, an entirely new way of playing that had little to do with what the rest of the game was doing.

Fortunately for long suffering Blues, Joe Royle had ridden to the rescue after Walker had been mercifully shown the door, freed to continue what would be his true vocation in life, perfecting the perfect tan.

Under Royle, a steelier Everton had rallied and prior to Christmas, the club was one of the form teams in the division. Confidence was riding high as Sheffield Wednesday rolled into town.

With confidence verging on cockiness, a rarity for Evertonians in the 1990s, it was probably inevitable what would happen next. In true Everton style, the club flattered early on, giving that illusory sense of confidence a little boost. Royle’s men went ahead around the half hour mark, the crowd erupting as Duncan Ferguson did what he did best.

And then, Everton did what they generally did best back in that bleakest of decades, by turning hope, form and momentum into misery, frustration and anger. In fairness to Royle, banishing the ghost of Mike Walker was going to take time and the inconsolably spineless side that the ex-Norwich man had put together was always just a few mistakes away from reappearing.

Sadly, on that lamentable afternoon, the mistakes came thick and fast and before you could say ‘Our marquee summer signing was Vinny Samways’ Wednesday were 3-1 up and looking to make the margin even greater.

I’ve never been one to leave the match early. And as someone who followed the side fervently during the 1990s, I had more than enough justification. And yet, that day felt different. The Boxing Day atmosphere is always a weird one.  You’ve got kids on a post-Christmas come down, grown men and women suffering from days of over-indulgence and players who never seem fully switched on. Collectively, it creates something unique in the air.

Prior to that afternoon, when mates or my family had talked about going to the Boxing Day game, an uneasy feeling had often stirred within me. It wasn’t that I didn’t want to go, it was Everton afterall, but rather a sense that if the game was called off, and I instead spent the afternoon watching Escape to Victory and eating my bodyweight in Quality Street, I wouldn’t be that bothered.

But here I was, faced with the prospect of sitting there for a further twenty minutes, amidst a crowd that had tapped into that weird undercurrent of energy and turned it into something dark and brooding.

I say ‘amidst a crowd’, but that wasn’t totally accurate. People were fleeing the Lower Gwladys with the same urgency that I imagine the people of Pompeii fled Vesuvius, but rather than running away from a tsunami of lava, they were fleeing the sight of Dave Watson being bossed by Mark Bright.

Despite experiencing that rare urge to join their swelling numbers, I simply could not do it. This wasn’t because of any sense of loyalty, obligation or pride. But rather instead, my own unshakable cowardice.

Seated, or rather stood, next to me and my brother (who had joined me for this dismal fixture) was a man for whom the term ‘brick shithouse’ had likely been coined. And he was not happy. Those who were leaving were feeling the full force of his ire; a post-watershed ire. Such close proximity to this embodiment of raw fury was an unsettling experience. But it was one preferable, we reasoned, to having it turned directly upon us had we decided to stand up and leave.

So instead we consoled ourselves with a desultory Mars Bar each, brought from a glut of selection boxes and sat back hoping that the scoreline would not get any worse and that not too much more of the ‘Brick Shithouse’s’ spittle would land on our heads. On both counts, our hopes proved unfounded.

The game would ultimately end 4-1, with Wednesday banging in a fourth in the closing minutes. I sat through the lot, only judging it safe to leave when our furious companion trudged off home, still muttering a litany of colourful expletives.

The days’ enduring legacy in my memory can probably be attributed to it being something of a perfect storm. There’s those familiar Everton tropes of disappointment, crushed hope and a palpable sense of frustration. Then there’s that often flat and unsettling Boxing Day atmosphere. And finally, you have a massive head case, trying to stem the tide of a crowd through the power of imaginative profanity and prodigious spittle.

It’s weird how sometimes it’s the shite games that don’t really matter that can stick in your memory. I’ve endured worse moments as a Blue and seen more painful defeats, but none of them I remember as clearly as that dismal day in 94. We’ve probably all got games like that, strange matches that lodge themselves in our memories for all the wrong reasons. It’s not the worst game I ever sat through but to this day, it’s the reason why I still don’t really enjoy Boxing Day matches, have a particular loathing for Sheffield Wednesday and can’t eat a Mars Bar with any sense of joy.