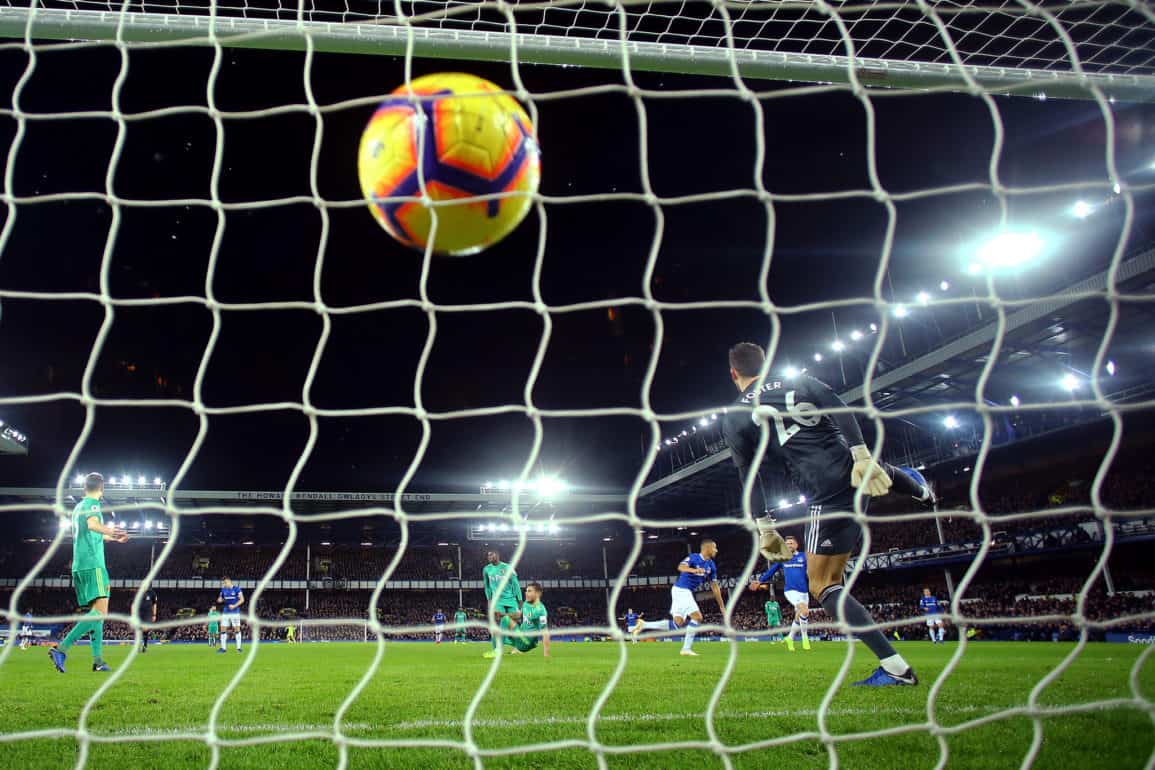 The Half Term Report

When analyzing the first half of Everton’s season the curious point to note is the levels of optimism amongst the fanbase in spite of a moderate start in terms of results. For a fan base that can be broadly characterized as airing on the side of brutal realism as opposed to utopian optimism (iconoclasts not idolaters as it were) it is an unusual situation to be found (though not a negative one). It has led to a level of leeway and time for the new management team to implement their ideas on the club. It also affirms to me a strong belief that ordinary football supporters are far more astute, empathic and intuitive than any of the main media outlets give them credit for (or the level of debate and analysis they offer up).

In a week that has seen Raheem Sterling rightly point out the conduct of the media does a great deal to influence some of the behaviour (and racism) that is then adopted by sections of football supporters. Yet most football supporters deplore that sort of conduct and rightly condemn in as unwanted in football and unrepresentative of the supporters as a whole, which is a lot more than can be said for leading media figures such as Piers Morgan who continually looked for ways to discredit the assertions made by Sterling.

The link between Sterling and Everton are somewhat tenuous but other than to say the sort of reaction in support of Sterling shows a similar level of maturity that Everton fan’s have shown in support of the new management team. Everton too are outsider in the eyes of the media (albeit in a qualitatively different way to the experiences of black footballers) but we have had to put up with a patronizing level of debate around our club. We’ve had Sky tell us not a single Everton player would get into Liverpool’s team, we’ve had no clarification from Paul Merson that the signing of Richarlison for £35 million pounds “broke the transfer window” and after the Derby we had to endure the indignity of news anchor Richard Keys trying to shoe-horn the fact Sam Allardyce managed to fluke a draw at Anfield as evidence that Everton have gone backwards.

There is no accident that this angle of attack is being introduced. Everton have committed many sins over the last 2 years in the eyes of the media. Firstly they have threatened the natural order that they like (their precious big 6), secondly they’ve had the tenacity to point out if such a thing as a “big 6” exists Everton very much belong as part of it. They have also sacked an English manager and replaced him with not just a manager from abroad but a different system, including a much more involved Director of football. Sections of the media cannot wait to see Everton slip up and are relishing trying to pigeonhole any poor defeat into a wider narrative of a club going backwards. To the credit of Everton supporters, this narrative has not caught on, and we can see with our own eyes the improvements the team has made in spite of too many eye catching results.

When watching the team I am impressed by the fitness and organization on display. We run further than most teams in the league, win the ball back more often, higher up the pitch and in fact lead the league in terms of ball retrievals in the opponents final third. At Anfield Jamie Carragher was even forced to admit that once Everton got into their shape they looked very difficult to prize open. The numbers back this up too, with only 1 game this season heralding more than 2 conceded and this with a heavily weakened team. Since the West Ham game (when new signings began to be introduced) we have gone 11 league games without suffering the same fate. When making the comparison to last season it’s worth noting we conceded more than 2 goals on 6 occasions up until this point and another 3 occasions under Sam Allardyce (one of those games saw 3 conceded after 45 minutes the other saw 4 conceded in 30 minutes). Of course you still get the same number of points for a heavy defeat as a narrow one, but in terms of perception to supporters it makes an awfully big difference to see an Everton team that is competitive in every fixture they play. It also indicates Everton have made significant improvements this season and are closer to the top teams in the league.

As yet what it hasn’t translated to in points on the board. From the same set of fixtures (pre the Manchester City game) we are currently 4 points below the equivalent fixtures of last season. We will also go into the Christmas break on a similar number of points to last season. This cannot be disputed and the big challenge for Marco Silva going into the 2nd half of the season has to be ensuring we capitalize on good performances with more positive results in certain games. This time last season was very much a high water mark for Allardyce who would go on to collect around a point a game for the remainder of the season. For Silva and Everton this needs to be the start of a process not the optimum point of it. There are significant signs that indicate this may well be the case. 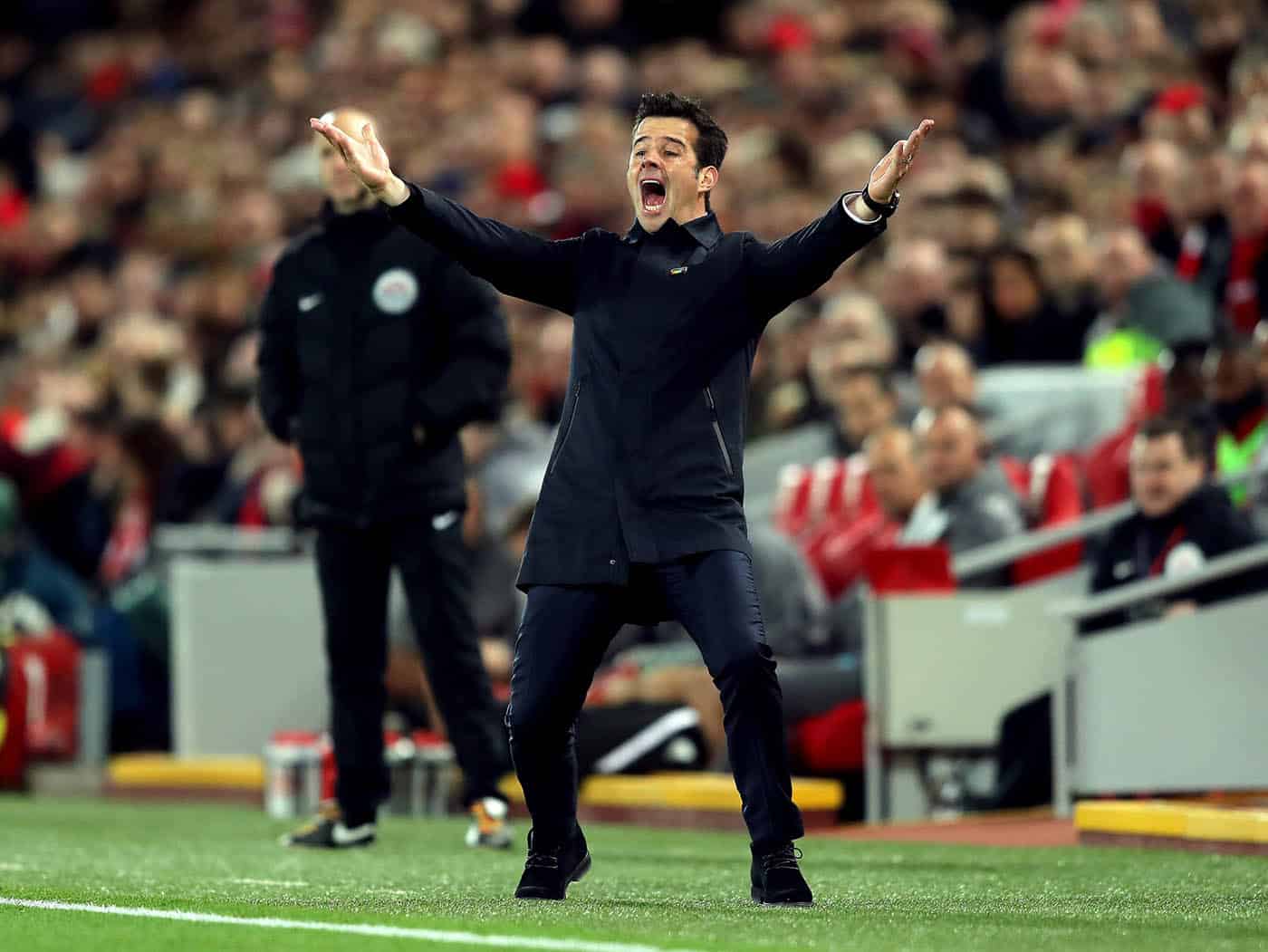 When judging any teams performance it is always worth compartmentalizing the league into sections. There are broadly 2 tiers in the league, notably the top 6 sides and the remaining 13. If you were doing a short analysis of Everton’s results over recent years you would say they are very good at defeating sides from tier 2 at home, struggle to beat sides from tier 2 away and are poor both at home and away from home against tier 1 sides. This pattern has been born out again over the season so far and is an important factor in why the points tally isn’t greater.

However the way the fixtures fell always made it likely to be so. The obvious and easiest improvements that could be made for this Everton side would be winning more away games against tier 2 sides and winning more home games against tier 1 sides. So far we have only had 3 fixtures out of 16 that fall into either category and we have picked up 5 points from 3 tier 2 away games. The reality is, that transforming the team to be ready to defeat tier 1 sides away in a matter of months after taking over was always going to be an enormous ask of Silva, who credibly has improved Everton’s performances significantly in those fixtures. The way the fixtures have fallen means that the intriguing fixtures in terms of measuring Everton’s performance come mainly in the 2nd half of the season where we face 5 of the 6 tier 1 sides at home and we have 10 of the tier 2 sides to play away from home. 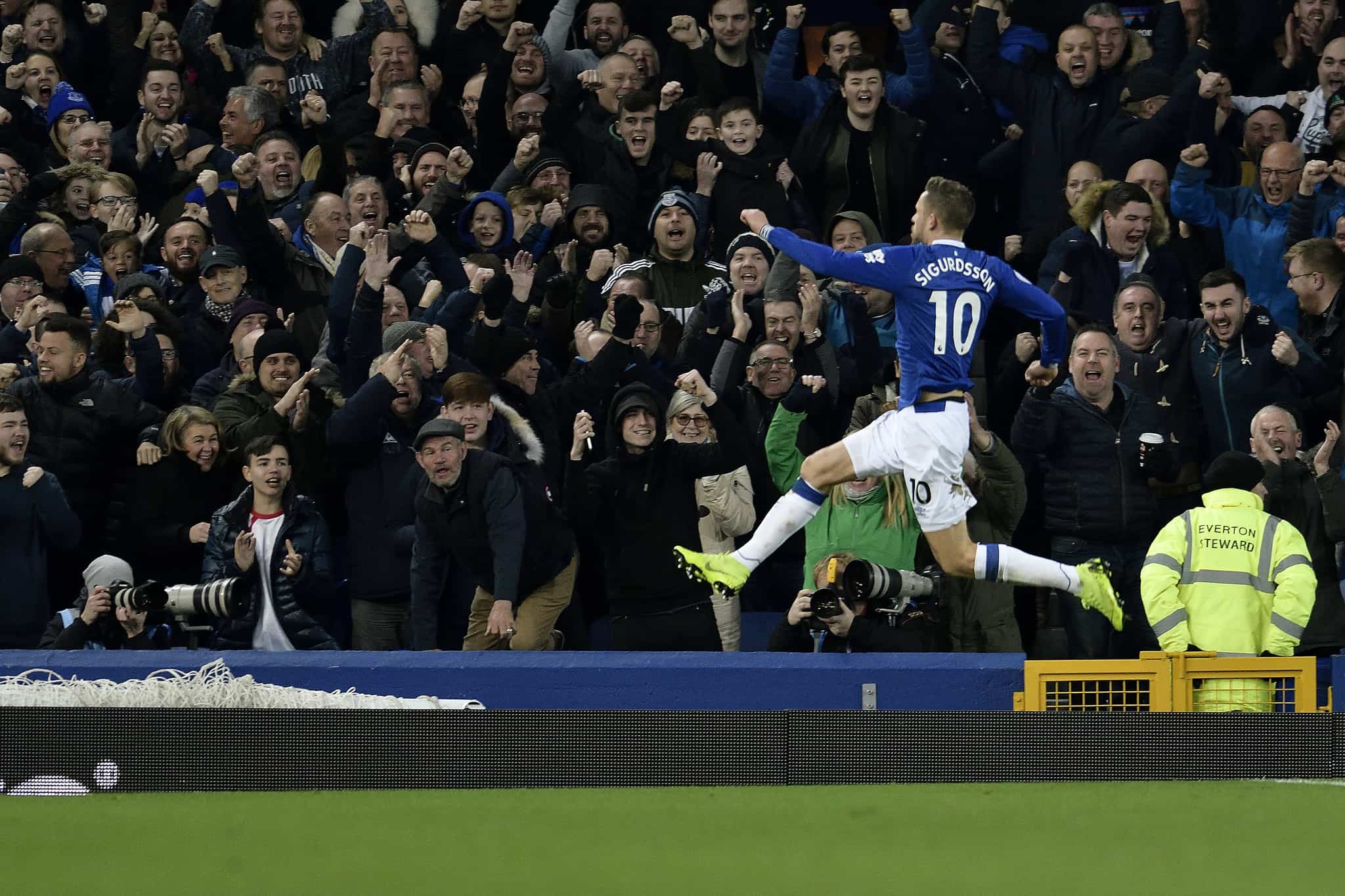 As we progress through the season you can look at the 2nd half of the season 2 ways. It could well be seen as a nightmare run for a side who is not proficient in anything much beyond defeating tier 2 sides at home. Or it can be seen as a perfect opportunity to gain a lot of points which almost every game falling into the winnable camp if the side has made the improvements it has threatened.

After the Spurs home game, there is a long run of Tier 2 games followed by a string of big home games one after another. The dream scenario for Everton has to be winning some away games, getting closer to the sides above us and entering the big home games full of confidence against tier 1 sides who are likely going to be involved un European competition and therefore more fatigued than our squad. While we had a glimpse of this sort of return under Koeman (before it fell away on the back of defeats at Spurs and Liverpool) the fixtures are perfectly set up for a big 2nd half of the season.

I had always felt Silva’s 2nd half of the season would be an improvement on the first. We only got our players in late into the window and took around 6 games to start filtering them into the team. The improvement since we did so has been clear, the first 6 games heralded 1 point per game while the following 10 games have heralded 18 points. Alongside that I always felt it would take some time for Silva’s game plan to be fully comprehended by the squad who would then require enough repetition of it to see improvements. While these factors (as well as favourable fixtures) offer hope for Everton supporters it will need to be put into practice by the management team- either way we will learn a lot about the players at the club. 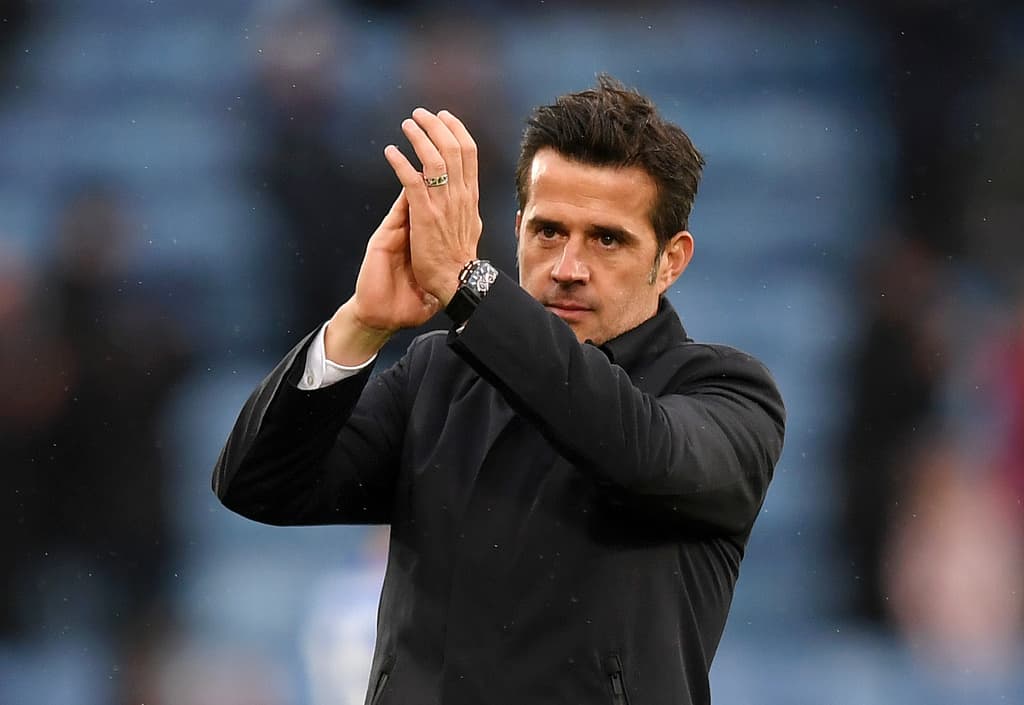 For Silva this is relatively new territory. While he has shown great adaptability in the first 6 month in charge new skills will need to be evident over the forthcoming months. While he has seen the season out in Portugal and Greece, continuing an improvement in the Premier League is a different and ultimately more challenging task. At both Watford and Hull he showed he was capable of producing sides that played an attractive brand of football and putting into place the organization to do this very quickly. What is now open to question is what Silva can once this scaffold has been established. Is he able to take performances that have thus far shown valiant efforts be turned into victories.

The article itself presents a very glass half full vision. It notes that the way the fixtures fell always made it unlikely the most noticeable improvements would be seen until the 2nd half of the season. It further notes that from the information we have we look far more adept at winning away from home against equivalent and inferior opposition and potentially again superior opposition at home. However is also has to be acknowledged that these are things that historically Everton have not frequently demonstrated. For Everton to continue to show improvement through the season it will be these two aspects where improvement is shown. While solid foundations have been laid this season, and the general quality of football has been better it will be important that these improvement lead to tangible improvement in the areas outlined to keep the positive improvements we have seen on track.