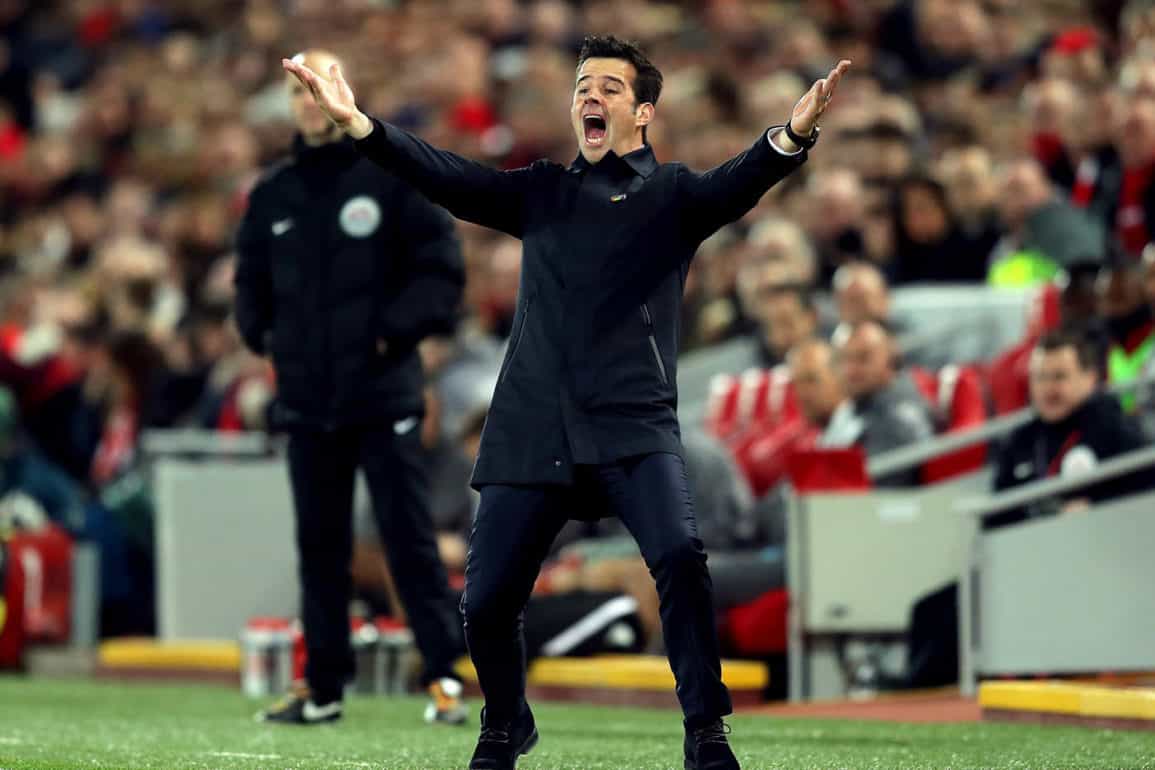 “Those who love, friends and lovers, know that love is not only a blinding flash, but also a long and painful struggle in the darkness for the realization of definitive recognition and reconciliation.”
Albert Camus, The Rebel.

When outlining the future for humanity in 1984 George Orwell remarked it best to imagine a boot, constantly stamping on a face forever. I can only surmise that it is fortunate that he never had the privilege of getting to be an Evertonian watching a Mereyside derby over the last 20 years. It has become a fixture where much of the discussion is not about whether you win or lose but rather which method of defeat is most painful. The truth is that Everton have specialised in finding increasingly innovative ways to lose the game. There would be the meek surrender and underperformance of Moyes, the kamikaze misplaced triumphalism of Martinez or the sort of clueless, seemingly without a plan hammering dished out in the subsequent years. Sunday’s display, while a defeat fitted into none of those paradigms and out to sit on it’s own when evaluating it’s particular place. The ending had more than a hint of the absurd to it and was a farcical way to end what was a very good game between two evenly matched teams.

The link to the absurd and indeed the above quote has to be French Algerian writer Albert Camus. If any writer conveys the experience of watching Everton most to me it is Camus. While literary contemporaries would opine about either the meaningless of the world (nihilism) or that in the absence of such meaning it is important to cultivate our own structures and meaning (existentialism) Camus coined a third set of ideas that borrowed from both of the above. He believed that the search for meaning is ultimately futile but also essential and we need to both embrace and rebel against this. Life is ultimately hopeless and so too is trying to create structures to cloud this fact but the process of doing this (and a subsequent awareness of it) can provide happiness along the way. The Derby will never be meaningless, much as we might want it to be, but no structure we present around it can guarantee us happiness. We will lose again there, but when we see progress it should be remarked upon and enjoyed. That is at least my way of synthesizing the ideas of Camus to the plight of Everton and though it’s unlikely to stand up to much academic rigour it certainly helps me maintain a sanity (though there are moments in Camus’s The Rebel where you do question whether it’s enlightenment or madness you are arriving at).

Is believing we can win at Anfield again a logical statement or the utterings of a madman? Watching Pickford perform an incredibly acrobatic way to perfectly present the ball to an oncoming Liverpool striker via a ricochet off the crossbar leads to the question being a live and worthwhile starting point. If I were religiously minded I would concede we are either cursed or they have signed a pact. I’m neither, I see it as awful luck for Pickford and Everton but it fits a wider structure of the absurd, both in the minute detail of the incident and also the wider context it exists in.

The question I led with though, as to which derby defeat feels worse can be easily answered for me, and the experience cements that viewpoint. The worst experience of derbies for me has been moments where we have underperformed. Games where we have not done ourselves justice. During the Moyes tenure there were times when we had better players, were in better form and would finish higher in the league but would look polls apart in the derby. That’s very much the context I approach derbies in now, that you want the side to do itself justice with it’s performance while acknowledging the vagaries of football mean that you can play well and because a break of the ball goes the other way you lose a game you could have won. This is ostensibly the story of this derby in a sentence. Everton perform well but the break of the ball goes the other way and they lose it. They are 6 inches off scoring a goal at one end, and 6 inches off having the ball bounce harmlessly over the bar at the other. Yet for Everton to improve, the human agency within both instances needs to improve if they wish to become a side who goes to the next level and gets to where Liverpool are now. Pickford and Gomes both need to remove good fortune from their situations. History doesn’t fondly remember valiant losers.

Before we detail the positives for Everton some space ought to be given to Liverpool who there is much to admire and learn from for Everton, even in a game they were quite underwhelming in. The goalkeeper they have is arguably the best in the country and makes fantastic saves (for me the Walcott one is better than the Gomes save) at crucial times. If Pickford loses Everton this game, then Alisson wins it for Liverpool. What I admire more is the resilience of the club. Even when they are having a difficult day, and the wider context hints at falling further behind the league leaders Manchester City the continue to strive for a winning goal that looked well beyond them. Alisson runs out of his goal to take a free-kick, Van Dijk goes and plays up front, Origi chases an aimless shot heading for the stands into the goal on the off chance it dips while all others stand and watch.

There is much suggestion Liverpool are where they are down solely (or mainly) to good fortune. Some will even point to how similar the two sides were in the pitch yet they are 14 points ahead of us. Some of that gap can be explained due to a slow start for Everton where signings bedded in (6 points from the first 6 fixtures attests for this) but that question now needs to dominate Marco Silva and the players minds. It shouldn’t be how did we lose that game, but rather how did we go into that fixture 11 points behind them? While they may well have had some good fortune that alone doesn’t provide a satisfactory answer. They have a resilience as a side to keep trying to win and often finding a way to win when they have no right too alongside a world class goalkeeper and centre back combination in Van Dijk and Alisson that keep them in touching distance in enough games to find their way out of.

Of course it is not easy for Everton to easy replicate the 2nd point. Van Dijk, Alisson and Keita cost Liverpool approximately what the entirety of Everton’s 14 players cost today. When Fabinho is factored in those 4 cost more than our match day squad. This is after 5 windows of intense spending the likes of which Everton have previously never seen. It still only matches what their rivals spend on 4 key players, 2 of which play an integral part in Liverpool finding a way to win games.

That is not to present it as a moan or a jibe. It is not impossible for Everton to have players of that level but it is extremely difficult for Everton to go and recruit when they are at that level. Everton have to gamble more on signings, whether it was Andre Gomes who was suffering with some personal challenges in his life, Mina and Digne who struggled at a top club, players such as Bernard from more unconventional leagues or younger players like Richarlison. We now have a coach who looks to have created the holistic environment for players to flourish and a joined up plan with the recruitment side to exploit this to it’s maximum. The level of improvement of players in a short space of time should give all fans hope that over a longer period we can begin to get closer to the sides above us. The evidence of this was very much on the pitch on Sunday, as it has been at Stamford Bridge, Old Trafford and the Emirates were Everton were competitive in all the fixtures.

Ultimately to turn spirited displays into positive results will need the development of players but also a shift in mentality (or rather a development of far greater resilience). Fortunately the 2 often go hand in hand, as players get better their self belief grows. The 14 Everton players involved yesterday were younger than their red counterparts and this makes some difference. Van Dijk is 2 years older than Keane and 4 older than Mina, while Alisson is a couple of years older than Pickford. Those 2 players were not operating at a world class level at equivalent ages but the gap between them currently is small enough for it to hopefully be bridged under the right system and the right coach. Instinctively most Evertonian’s can feel we now have both of those in place.

The next step is to start putting a run of results together. There are signs this is already happening, and while the Manchester City game will be challenging all other fixtures over the forthcoming weeks present an opportunity for Everton to kick on another level. Away fixtures at the likes of Brighton need to start becoming games we win more regularly. This team is good enough to do so but should be under pressure to begin delivering this (much quicker than I felt it would).

Since Yerry Mina has come into the team, Everton have conceded 1 (farcical) goal in 3 games. Two of them were away against Chelsea and Liverpool. There is now a solidity to the team that hints at an eleven able to go to most grounds and shut the opposition out. Alongside Mina Michael Keane looks to me the best English centre half in the league, showing poise on the ball and aggression without it to be the imposing centre half we have been waiting a long time for. The full backs are also quietly going about their business in an understated by efficient way. Coleman who had a slow start to the season has been very effective at minimizing the threat of both Eden Hazard and Sadio Mane in consecutive away matches. In front of them Gana has been very effective in breaking play up and Gomes looks better with each passing game. His derby performance was reminiscent to me of how Alonso would control the game for Liverpool and would at times resemble a man playing at a different tempo to the players around him.

The big conundrum for Silva now has to be the attacking ide of the team. I don’t believe we are either attacking, or at times converting with the sort of regularity we could do. It goes back to the point on resilience, to make the next jump we need to be more clinical with the openings we get. Walcott for me is now the obvious man to sit out and Lookman should play. His brief cameo at Anfield was eye catching and he has earned a run from the start. Bernard also produced his best performance in a blue shirt and the hope will need to be that it can be a catalyst for a big improvement. All round though more goals are needed. That needs to start against Newcastle tonight. A stuffing will certainly help provide some closure to the unique absurdity football can offer.