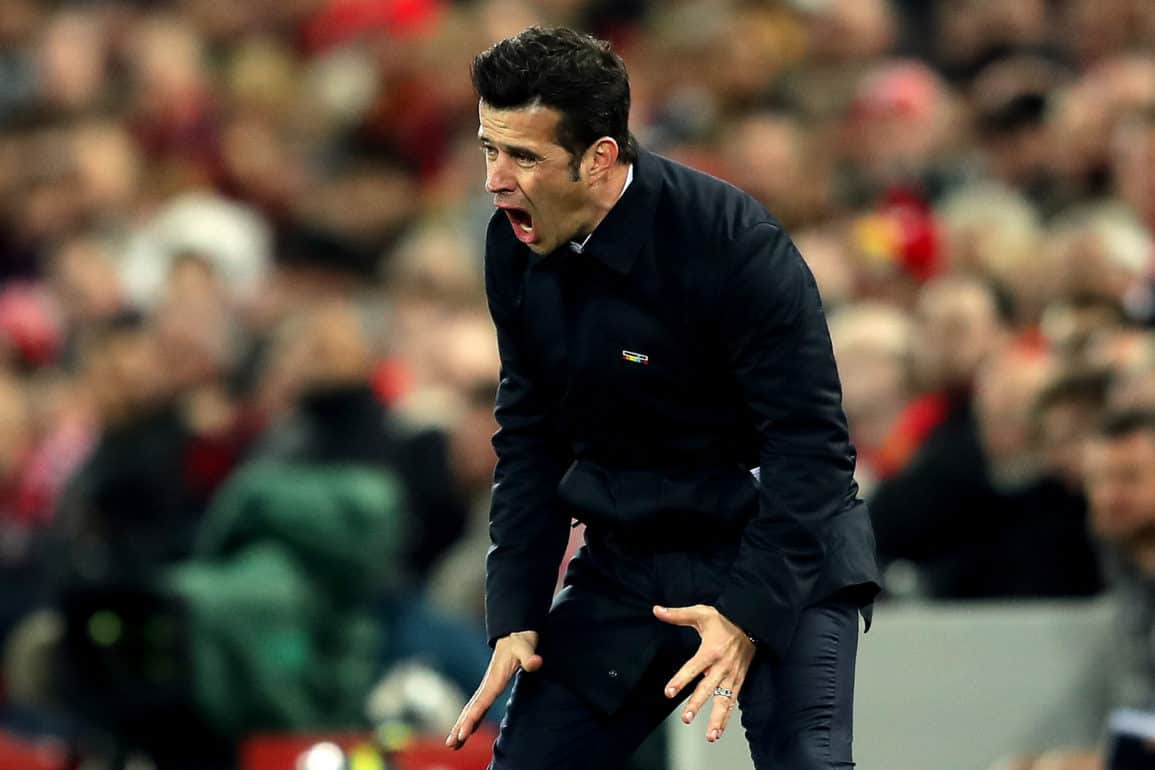 A bad decision by Jordan Pickford in trying to hold onto a flyhack from van Dijk allowed substitute Origi the easiest of goals in the sixth of four added-on minutes, denying Everton a point they thoroughly deserved.

The Blues and our legion of fans crossed Stanley Park looking to put a nightmarish history of not having won at our first home since 1999 well and truly behind us. Awaiting were a wounded Liverpool, humbled in Paris midweek but still unbeaten in the league and desperate to maintain their advantage in the 100th Anfield ‘derby’.

Much was made of the loss to PSG and the reaction of Herr Klopp to elements of the game portrayed by Neymar when discussing the game with the media representatives. But then, he’s not new to daft reactions as his questioning the phalanx of reporters last season on the validity of our penalty is testament to.

With Man City having disposed of Bournemouth, arguably Klopp and his charges were under more pressure than Everton to win this ‘derby’ if they were or are to maintain any hope of catching Guardiola’s league leaders. In choosing his starting eleven with Henderson suspended, the German opted for: Alisson, Alexander-Arnold, Gomez, van Dijk (c), Robertson, Wijnaldum, Fabinho, Shaquiri, Salah, Firmino and Mane.

With only one reversal in the last seven games, Everton and Marco Silva approached this shortest awayday trip in both good form and heart, no injury concerns, and Ademola Lookman in serious contention for his first league start of the season.

Ahead of his debut Merseyside ‘derby’ our Portuguese mentor spoke confidently when he observed, “Fear is something that doesn’t come inside our dressing room. Respect, yes, but we don’t change anything in our way. We won’t change our ambition or style of play. It is important to enjoy the moment and be strong. We want to win the match and nothing more.”

And Silva, looking to become the first Everton manager to win his first league encounter with them at Anfield, was able to name an unchanged line-up for the third straight game: Pickford, Digne, Mina, Keane, Coleman (c), Gana Gueye, Gomes, Sigurdsson, Walcott, Bernard and Richarlison.

A quick start to the game by both sides saw the first chance fall to the Blues after a push by Alexander-Arnold on Bernard saw Digne sendin a free kick that Mina got on the end of but his free header went narrowly wide. Mane tried to send Alexander-Arnold away on the right, but Lucas Digne defended well before Bernard got away from the halfway line to beat Fabinho but trip up as he looked to find the penalty area.

It had been a lively opening ten minutes with both sides showing a clear intent to get on the front foot. Mane muffed a good chance, firing over on a chipped ball from Salah and then Pickford made a good stop, spreading himself to deny Mane on a ball from Alexander-Arnold as the home side looked to take the initiative.

Both sets of fans jeered Pickford and Salah respectively for miskicks ahead of a good Everton move down their left flank, Bernard to Gomes and he sent Richarlison into the area only to loose his footing and go down, no contact, no penalty and no appeal.

Salah then got away from Mina to find Firminho who turned nicely to shoot, but shot wide. Everton’s second and best chance of the half came on twenty minutes as a cross to the back post was cleverly headed back into the six-yard box for Andre Gomes ans his header was saved by Alisson and Gomez was needed to clear the loose ball off the goal line.

Firminho curled a 25-yard shot wide of the target and with Everton giving a good account of themselves in the midfield, Shaquiri became the first booking of the game for a trip on Bernard.

It was Shaquiri though who spurned the best chance for the home side when Gana Gueye, uncharacteristically, lost possession in midfield and Salah played Shaquiri in and he fired his shot straight at Pickford.

A good turn by Sigurdsson saw him then play a slide rule pass beyond van Dijk for Walcott to round Alisson but run the ball too far to get a shot on target.

After a pretty frenetic opening 35 minutes, not surprisingly the pace of the game dropped somewhat in the run-up to half time and both teams retired for a slice of orange with honours even and two good chances apiece.

Liverpool stated the second half the better with Salah curling a shot wide on a feed from Wijnaldum ahead of some good defensive work from Bernard on a quick Liverpool break.

Mane shot wide a pass from Firmnho got behind Michael Keane and a couple of minutes later, Mane again spurned a good opportunity when fed by Salah. Theo Walcott went down and needed treatment to his Achilles heel after an accidental knock from Wijnaldum.

A fine move from Everton that started on the left and switched to the right ended with a Walcott cross too close to Alisson who was able to launch a quick Liverpool counrter that eneded with Salah rightly caught offside.

Ademola Lookman replaced Walcott on 62 minutes as the Blues looked to add some more pace for the last half hour. Sigurdsoon found Coleman with a super pass and his cut-back cross was cleared only to the Icelander whose shot didn’t overly trouble Alisson.

Good work by Lookman saw the ball worked to Bernard on the left and his shot went wide when a corled effort might have been a better choice.

Keita replaced Shaquiri and Sturridge came on for Salah with a little over 15 minutes to play before Fabinho and Gomez were rightly booked for fouls on Richarlison.

A Liverpool break came to nothing as Firminho sent in a cross-cum-shot that went wide with the Brazilian subsequently replaced by Origi. DCL came on for Bernard on 89 minutes and Kurt Zouma replaced Sigurdsson a minute later.

Into the indicated four minutes of added-on time and Sturridge got away from Gomes but Richarlison was on hand to clear the danger. And after Gana Gueye limped off with what looked a groin injury, Liverpool lofted a ball into the box, it was partially cleared to van Dijk whose fly-hack appeared to heading over the bar only for Pickford to try and grab it and it falling agonisingly for Origi to nod into the empty net sparking the inevitable over-the-top celebrations from Klippity Klopp.