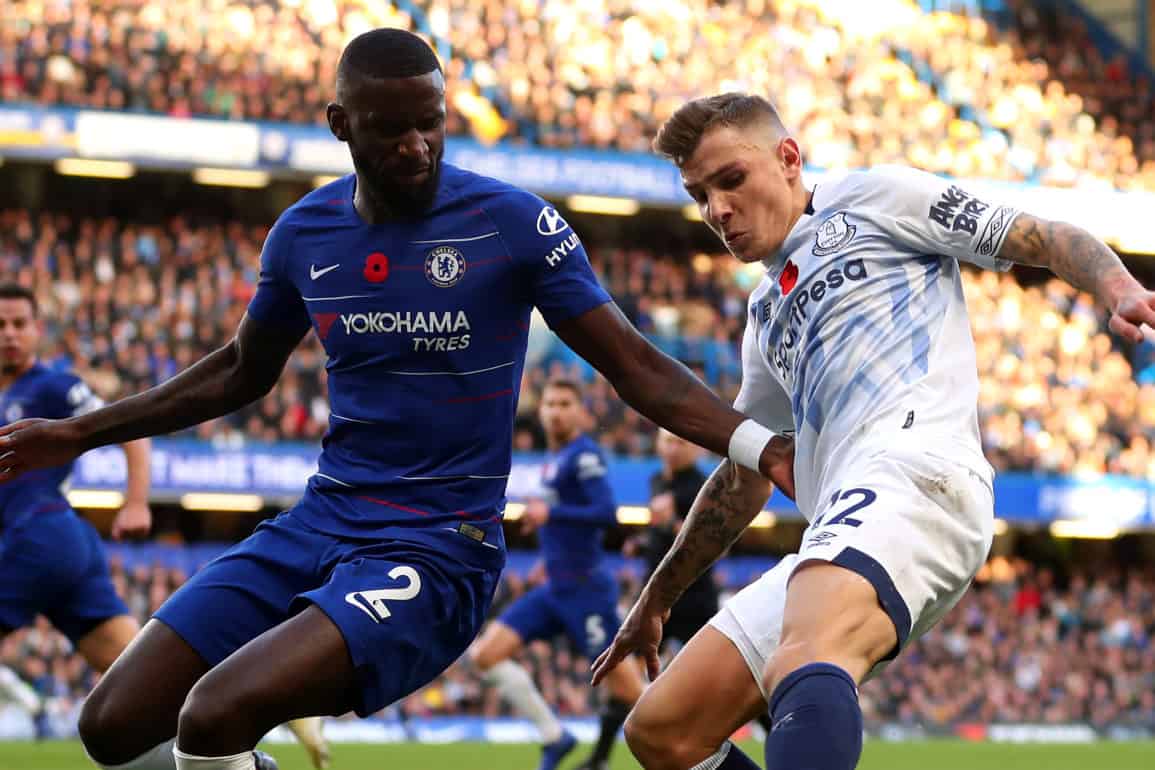 It’s been an awful long time since Everton took victory from a league game at Stamford Bridge, November 1994 to be precise when Paul Rideout bagged the winner. So the task ahead of Marco Silvas’ side was a not inconsiderable one, given Chelsea are unbeaten in all competitions so far this season and striving to keep pace with Manchester City and the unmentionables in the race for the Premier League title.

Since Roman Abramovich took over at Chelsea, they’ve changed managers with alarming regularity but always seem to find a way to lift silverware. Latest managerial recruit Maurizio Sarri doesnt appear interested in reversing that trend and expressed disappointment at his sides showing against Bate Borisov on Thursday night and will likely demand a reaction against Everton.

After a terrific all-round game against Brighton last week, Everton were forced into a mandatory change with loanee Kurt Zouma ineligible to face Chelsea, so would Silva give summer signing Yerry Mina his first Premier League start alongside Michael Keane in the heart of the defence. There was also a doubt of the availability of leading scorer Richarlison who missed training on Thursday, but did take part in a full training session on Saturday.

Kevin Friend was entrusted with the refereeing duties.

An immaculately observed minutes silence on this most poignant of anniversaries preceded the game.

A Coleman overlap and cross led to a first corner as a Richarlison shot was deflected wide, with Digne finding the head of Keane but the effort went well wide. A foul by Azpilicuate on Bernard led to a Digne free kick finding Mina in the area, but Chelsea were able to clear albeit hastily.

It was a decent opening from the Blues, in their white away strip, with a compact formation denying Chelsea earlier opportunities to stamp any authority on the game. Walcott and Coleman combined to win Everton a second corner on the ten minute mark, Bernard firing a 20-yard effort wide of Kepas’ right hand post.

Chelsea earned their first corner as Digne headed a cross from Alonso to safety, the home side unable to make anything of the set piece. In the next Chelsea move, Digne with some fine work denied Willian the chance to get on the end of a knock-down header from Morata

Everton were incensed when referee Friend booked Mina for a tackle on Hazard when he appeared to have clearly won the ball, but his trailing leg caught the Belgian. Alonso curled the resulting free kick around the wall, but wide of the target much to the delight of the travelling Evertonians.

Jorginho was booked for a nasty challenge on Sigurdsson after the Icelander had dispossessed him and tried to get away down the right flank. Sigurdsson needed treatment for the knock received to his right ankle, and limped gingerly off the pitch. Slow motion replay showed Jorginho clearly had both feet off the ground and he was lucky not to see a straight red card…. according to Graeme Souness, who knows a thing or two about dodgy tackles.

Kante was rightly booked for a challenge on Richarlison on 33 minutes.

Hazard got away from Coleman to cross for Willian, but again, Lucas Digne was in the right place to clear the danger.

Alonso was lucky not to get booked for a challenge on Walcott where he clearly took the wingers ankle, Marco Silva very unhappy with the challenge.

A free kick, following a Gomes ankle tap on Hazard, by Willian found Alonso in space on the left and he struck a fierce volley that saw Jordan Pickford make the games first save.

The home crowd howled for a penalty as Morata went down in the box trying to get on the end of a ball from Hazard, but there was no reaction from the referee, rightly so as there was no contact from or with Digne.

In added-on time, Rudiger went down claiming a head butt on him by the miniscule Bernard with both receiving yellow cards for the lunacy of the incident.

In a half that saw five yellow cards, one fine save and some solid, impressive, organised defending from Everton, they retired to the dressing room for a slice of orange with the honours still even.

No changes by either side for the start of the second half as Everton prepared to attack the end of Stamford Bridge where their fans were encamped.

Chelsea were quick out of the traps as Pickford dived to his right to foil Morata getting on the end of a ball from Alonso.

A good move involving Gomes and Sigurdsson saw the Icelander play a great cross field ball for Walcott, but his first touch let him down and allowed Kepa to gather.

Both sides were now looking to play with a quicker tempo and Ross Barkley received a mixed welcome from the Evertonians when he appeared to warm up as Chelsea manager Sarri considered an early change.

Kepa made his first save on 56 minutes as Bernard found Sigurdsson in space and he tried to find the top corner, his shot being tipped over for an Everton corner, from which Rudiger was lucky not to be penalised for a handball unseen by the referee.

It was now getting lively as Pickford and Digne got in a mix and from a cross by Willian, Mina appeared to impede Morata, and then at the other end a cross from the right by Richarlison found Bernard at the back post, but as at Old Trafford, he totally miskicked. End to end stuff then saw Willian get away on a ball from Hazard and fire a low cross across Pickford but wide of the post.

Hazard tried his luck from long range with Pickford turning the effort away for a corner that came to nothing. Chelsea were pressing hard and a Luiz shot was next deflected away for a corner.

Pickford needed to adjust his position to tip a deflected Hazard shot to safety at the expense of another corner.

On 64 minutes, Ademola Lookman became the first change of the game replacing Bernard, with Chelsea countering by sending Fabregas on for Jorginho.

A lofted pass by Rudiger was flicked on by Hazard, and Alonso struck another first time shot that beat Pickford, but flicked the bottom of the post on its way wide.

Willian came off for Pedro on 68 minutes as Chelsea flexed the strength of their bench.

Despite the mounting Chelsea possession and pressure, Everton were defending well and excellent line holding saw a Morata ‘goal’ correctly waved off for offside.

Hazard on the end of a ball from Kovacic flicked a shot with the outside of his right foot across Pickford and wide. The Everton ‘keeper was then booked for time-wasting on the resulting goal kick.

In a clear view of the Everton mindset, Phil Jagielka replaced Gylfi Sigurdsson on 75 minutes, the Icelander with a slight limp as he slowly left the field.

Into the final 15 minutes and again Morata went down in the box under pressure from Michael Keane, the home crowd again spitting dummies out as referee Friend waved away the penalty claim.

Great work and quick feet by Lookman saw Everton win another corner that saw Azpilicueta concede another which disappointingly came to nothing.

Barkley became the third Chelsea change replacing Kovacic with ten minutes to play, and to be roundly booed by the Everton supporters.

Richarlison went down holding his groin on 87 minutes and Everton wasted no time in withdrawing him for Calvert-Lewin, while the moaning Morata was finally booked.

Five added minutes were signalled as Barkley drew jeers for another misplaced pass.

A late free kick conceded by Gomes saw Chelsea unable to make anything from their final chance and the teams shook hands with a point apiece.