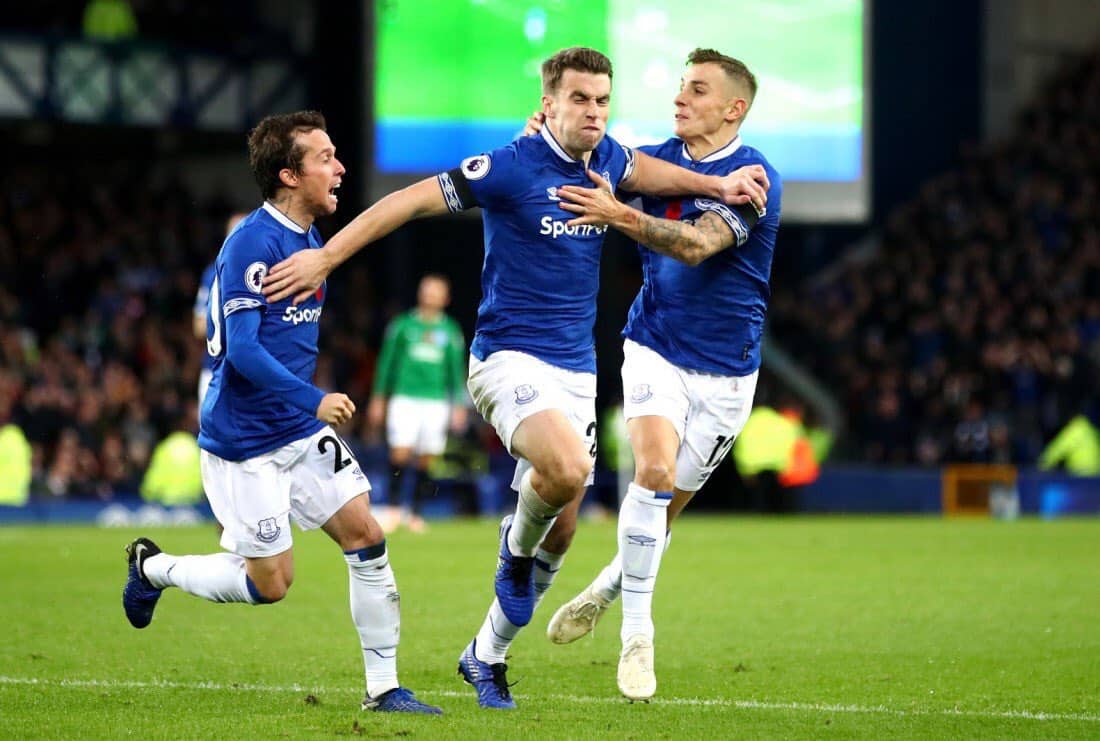 A brace of goals from Richarlison and a superb strike from Seamus Coleman saw Everton back to winning ways in arguably their best performance of the season to date.

Brighton came north on the back of three straight one-nil wins and with veteran striker Glenn Murray in a rich vein of form having tallied six of his sides eleven goals this season, and totalled 100 career goals for the Seagulls.

Meanwhile Everton were looking to bounce back from the loss to the Jon Moss aided Manchester United, last weekend, and maintain an unbeaten home record against Brighton at Goodison. Evertonians were hoping that Richarlison could get back to scoring as with three in five games as a winger, he’d netted just once since moving to the centre forward role.

Marco Silva was unable to call upon either Phil Jagielka or Jonjoe Kenny for this game and faced a minor selection dilemma with Yerry Mina now fully fit and with loanee Kurt Zouma ineligible for next weekends trip to Chelsea. Would the Portuguese give Mina the Brighton game or play him in Tuesday’s friendly against Gor Mahia to give him some game time?

For the visitors, who’ve made a decent start to the season boosted by this three straight wins, manager Chris Hughton was unable to recall either Pascal Gross or Davy Propper due to ankle injuries. He named his starting eleven: Ryan, Bruno (c), Duffy, Dunk, Bong, Jahanbakhsh, Stephens, Kayal, Izquierdo, March and Murray.

Our referee on a cool, breezy afternoon was David Coote.

Ahead of kick off, Goodison paid its respects to the fallen of two world wars and the tragic loss of life at Leicester last weekend with an immaculately observed minutes silence and haunting rendition of The Last Post.

A steady opening saw the Blues carve out the first opportunity on five minutes as a great ball down the right channel from Keane found Coleman but neither Sigurdsson or Richarlison were able to make the most of his cross.

Zouma then did likewise to send Digne free down the right only for his cross from the byeline to be easily gathered by Ryan.

On nine minutes, Dunk was booked for blatantly hauling down Richarlison as he tried to get on the end of a ball from Sigurdsson.

Everton won their first corner on 17 minutes as Sigurdsson and Coleman combined to release Walcott for a surging run into the area, Zouma heading wide from the Digne corner kick.

The opening twenty minutes had been played almost entirely in the Brighton half and the Blues finally made their dominance pay as from a Brighton corner, the headed clearance by Zouma found Sigurdsson, he made ground before playing a one-two with Bernard and then finding Richarlison for a terrific finish in the 26th minute.

Richarlison sent Digne into the box and the left back went down with referee Coote waving away penalty claims… where’s Jon Moss when you need him eh ?

Pickford found Walcott with a pinpoint clearance and he played in The overlapping Coleman for a cross that was too easy for Ryan.

Against the run of play, the visitors drew level on 32 minutes as a short corner was lofted into the box and Dunk made no mistake with his header.

The Blues appeared rattled for a couple of minutes, but soon got back on top, but were unable to re-establish a lead before the half time whistle.

No changes by either manager during the interval and Everton came tearing out of the blocks, and were unlucky not to regain the lead two minutes into the second period. Sigurdsson found Gana Gueye and from the edge of the box his low shot beat Ryan but cannoned across the face of goal off the inside of the post. Bernard gathered to cross to the back post where Walcott at full strength couldn’t control his short range shot that went high.

However, the goal wasn’t too long in coming and what a finish it was !!! Bernard found Gomes in space and he played in Seamus Coleman for a piledriving low shot into the far corner on 49 minutes.

The Blues were now back in total charge with Gana Gueye tackling anything that moved and Gomes orchestrating from midfield.

Keane, having another excellent game, headed a Sigurdsson free kick over the bar just before the hour mark that heralded three quick substitutions. Knockaert replaced Izquierdo, five minutes later Ademola Lookman came on for Bernard and Brighton made a second change with Bissouma replacing March.

Into the final fifteen minutes and Everton deservedly added a third marker as Richarlison latched onto a loose ball in the Brighton half, turned Duffy inside out, ran in on Ryan, rounded him and coolly slid the ball home for his second of the game.

Dominic Calvert-Lewin replaced Theo Walcott on 84 minutes and Pickford showed his alertness, adjusting to tip over a curling effort from Jahanbakhsh.

In the final minutes, Gylfi Sigurdsson became Everton’s third change as Yerry Mina finally made his debut appearance in the Royal Blue.

Despite the Minot setback in conceding the Dunk header, this was a fine team performance from Everton, and it’s clear to see that the Marco Silva era is truly gaining serious momentum.