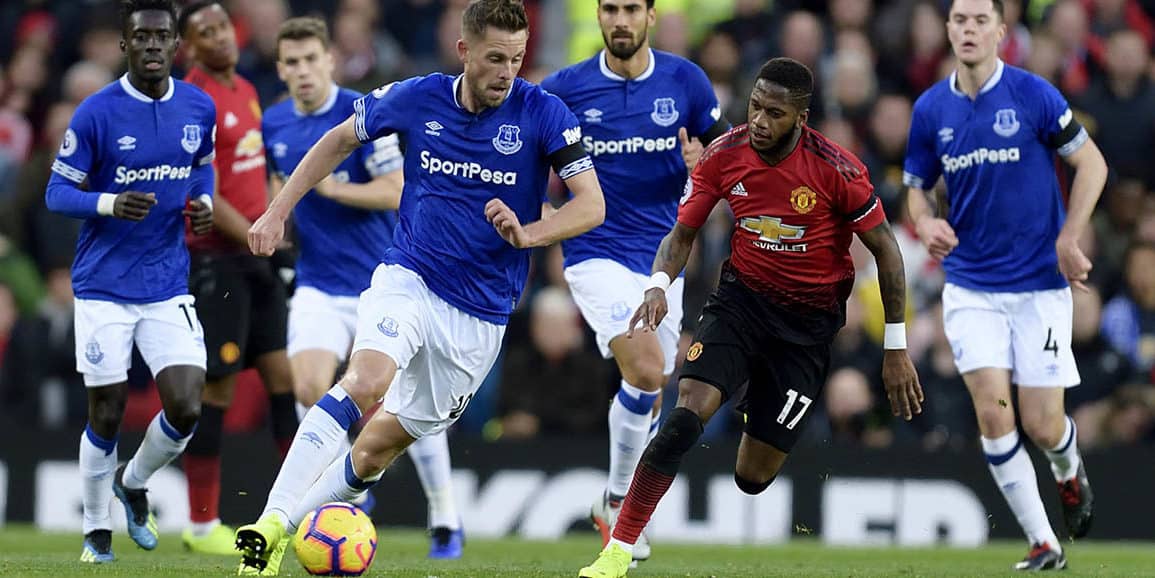 Gylfi Sigurdsson’s late penalty wasn’t enough to earn the Blues a point after a costly miss by Bernard as United got back to winning ways courtesy of a dodgy penalty won by Martial and converted at the second attempt by Pogba, and a stunning curlier from Martial.

Everton made the short trip to Old Trafford standing two places above their hosts in the Premier League table and looking to win their fourth game straight at a ground where they’ve not had the best of times since the inception of the PL. With United stuttering to find any real form despite having an array of talent to call upon, Everton manager Marco Silva clearly had designs on adding to the woes of his fellow Portuguese Jose Mourinho.

Mourinho, the self-acclaimed ‘Special One’ when he first arrived on these shores, has appeared to be at loggerheads with club management, players, former players, the media and just about anybody else who fancies an argument all season long.

In his pre-match press conference, Mourinho was happy to speak well of Silva saying, “The only thing I want to say is that I have a very good relationship with him. Yes, we are good friends. In football it’s difficult to feed that relation with managers, because our life is not an easy one and it’s not like we can have conversations or be together every day or every week, but he’s a good boy. I feel that he has the same kind of feelings towards me.”

Following a Champions League performance against Juventus that was widely viewed as poor at best, he needed a reaction and made changes in naming his starting eleven: De Gea, Young (c), Smalling, Lindelof, Shaw, Fred, Matic, Pogba, Mata, Rashford and Martial.

Looking to build upon the recent upturn in results and with a fully fit squad to choose from, Marco Silva appeared to be in a much better situation but was no doubt wary of any degree of complacency setting in with his Everton squad. And he was well aware of the weapons United possess and in particular former Blues striker Romelu Lukaku, despite him being goalless in his last six PL outings.

“When you are talking about Lukaku, when a striker doesn’t score in the last games it is normal to criticise him, it happened the same with some of our strikers before. But I think Lukaku and the Man United team have the quality to do good things. We have to do everything that we can to achieve a good result and to stop them. A good result for us is always thinking we can win the game.”

Much to the chagrin and dismay of many Evertonians, John Moss was the appointed referee.

United and Everton supporters alike observed an immaculate minutes silence ahead of kick-off as a tribute to the loss of life at Leicester yesterday and also to mark 100 years since the armistice in World War One.

A lively opening to the game saw Zouma release Digne down the left flank for the crss that was cleared and picked up by Bernard to chip to the back post for Richarlison to go down under pressure in winning a corner. Coleman and Gana Gueye dealt well with a right wing raid by Martial before Walcott pressured Lindelof into a mistake to find Sigurdsson whose cross for Bernard was just a tad too strong. Andre Gomes had a clear header from a right wing corner, but his firm effort was straight at De Gea.

A United free kick following a foul by Zouma on Rashford led to a cross from the left by Martial that saw a Mata header comfortably dealt with by Pickford. Smalling was the games first booking on 20 minutes for a tackle from behind on Richarlison with Gana Gueye then seeing yellow for a foul on Fred.

Pickford made the games first real save in the 23rd minute beating a Martial blast away for a corner that came to nothing.

On 25 minutes, Evertonian pre-game fears were realised as John Moss awarded United a penalty after Martial when down theatrically under a challenge from Gana Gueye. There was certainly minor contact, but the plunge by Martial was uncalled for and even Graeme Souness and Jamie Redknapp felt it was a harsh call. Pogba’s initial shot after a ridiculous approach was saved by Pickford, but the Frenchman was quick to put the rebound into the unguarded net.

Five minutes later another United attack down the Everton right saw Rashford net after Pickford could only parry a shot from Pogba, but the flag was already up for offside.

The goal certainly helped the home side settle down and they appeared keen to keep pressure on the right side of the Everton defence with Martial and Pogba in particular. Young was slightly fortunate not to see yellow for a challenge that felled Lucas Digne on 35 minutes.

Sigurdsson won a midfield duel with Matic, who was subsequently booked, to feed Coleman and the Icelander was quickly into te box to meet the resulting cross, but again the header was straight at De Gea.

As half time approached, Sigurdsson played Walcott in and he beat Lindelof easily, but his low shot was easily dealt with by De Gea. A terrific pass from Keane found Walcott and De Gea was happy to beat the shot away for a corner in added-on time.

No changes by either manager during the internal as the Blues kicked off attacking the former scoreboard end where the travelling army of fans were encamped.

Gueye intercepting a loose pass played in Richarlison for a low shot that De Gea saved at the foor of his left hand post.

Three minutes into the second half, United doubled their lead as Martial curled a sumptious shot into the far corner on a pass from Pogba that gave Pickford no chance.

Everton spurned a glorious chance to reduce the arrears and get back in the game as Richarlison found Sigurdsson and he released Bernard to run in and round De Gea before inexplicably hitting the side netting with the goal gaping.

Pickford denied Rashford with his legs as the England forward got on the end of a through ball from Mata.

Mata, unsurprisingly, was becoming more and more influential and another fine ball played Pogba in with Pickford again saving low down to concede a corner that came to nothing.

Ademola Lookman prepared to come on around the hour mark, coming on to replace Bernard in the 62nd minute.

Pogba went down screaming like a stuck pig under a none challenge from Gomes, drawing a rueful shake of the head from Marco Silva, clearly fed up with the Frenchmans’ posing and posturing ahead of Lukaku replacing Rashford in the 65th minute.

A fine run by Gomes saw him feed Coleman and then get on the end of the cross, but as with earlier headers, his effort had neither enough power or direction to overly trouble De Gea.

Everton carved out another good chance when Lookman found Richarlison and he played Coleman into space for a rising shot that cleared the crossbar when he really should have made De Gea work.

Everton won a penalty on 76 minutes after Pogba lost possession and Sigurdsson played in Richarlison who was felled by Smalling. Sigurdsson made no mistake with a thumping shot to the left of De Gea who dived the other way.

Cenk Tosun and DCL came on in a double change to replace Gana Gueye and Theo Walcott for the final quarter hour.

Lukaku drew howls of derision as he failed to make the most of a right wing cross from Pogba, his weak header sailing aimlessly wide of the target.

With six extra minutes indicated, Blues fans raised their voices for a final onslaught in search of an equaliser that would have been deserved, but it was Pickford who again proved vital denying Martial as he was played into oceans of space, the England ‘keeper coming out on top.

Everton’s three game winning run came to an end, but they can take heart from a decent performance that deserved a point and would have been so had we been more clinical in front of goal, particularly the miss from Bernard.