A new season, a new manager, a new Director of Football & of course… new signings! This time something feels different.

For the last couple of Transfer Windows, we’ve been faced with all sorts of questions, “Pickford 30million!?”, “You’ve paid how much for Sigurdsson?” & now the media turn their attention to Richarlison. Even when Marco Silva & Marcel Brands work their magic and convince highly touted Brazilian, Bernard to sign up on a free transfer… his wages are brought to the forefront.

At the end of the day, in times of fear, the weak group together. With a front line consisting of Richarlison, Walcott, Bernard & Tosun… we will instil fear!

In this article, I want to look at what we can expect from our team this season, starting with our manager.

Marco Silva usually sets his teams up with width being the main source of creativity, he also demands a high work rate from his central players… With Gana Gueye & to an extent Gylfi Sigurdsson who may potentially play a deeper role this season, Silva should be content with his options.

The addition of Andre Gomes is a shrewd piece of business by Marcel Brands, granted he didn’t have the best of times at Barcelona but given his time at Valencia, there’s definitely a player in there! Standing at 6’1, quite physical & ‘decent’ in the air, Gomes should fit into the Premier League quite seamlessly. When playing, Gomes should be accompanied by Idrissa Gueye as Gomes isn’t the best when it comes to winning the ball back, he does however, possess the ability to spring a piece of magic out of nothing!

Also, expect Tom Davies to play a prominent role this season, to me Tom is a ‘jack of all trades’ type of player but without doubt he brings bags of energy!

Back to our wide players…

With our probable starting wide players being Lucas Digne, Richarlison, Theo Walcott & Seamus Coleman, we can expect a huge amount of service into the box for Cenk Tosun.

When your main competition for a place in the side is Jordi Alba, it’s always going to be tough to get game time. Last season Lucas Digne only managed to make 12 appearances, totalling 702 minutes on the pitch, averaging 58 minutes per game. Looking at his chance map above for the 2017/18 season, the areas where he likes to operate offensively should be a sign of things to come! Linking up with Richarlison, hopefully we can emulate the old Baines-Pienaar days that caused havoc for teams & brought us great memories at Goodison Park.

I can’t remember the last time I was this excited about a signing, at 21 Richarlison possesses a perfect blend of strength, skill & finesse.

After a depressing pre-season, seeing Richarlison bounce players off him at Goodison last Saturday was rather pleasing. To me, the small details make all the difference, such as Baines playing a pass into Richarlison’s feet, only for him to quickly knock it around the corner to Cenk. Something that small was enough to get me off my seat, Richarlison definitely seems to have that ‘It’ factor that us Everton fans have been craving for!

The obvious objective for Marco Silva this season is to get the ball into Richarlison as much as possible, but what does he do when he has possession? 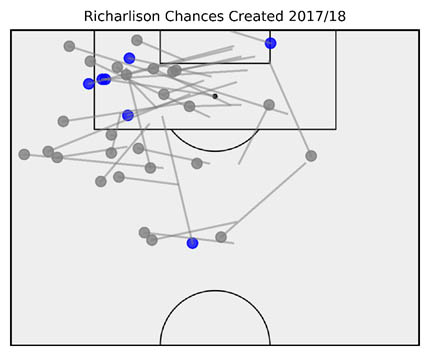 Just looking at this map, the amount of chances played into the box is frightening! It’s by looking at this map I start getting all sorts of questions… ‘Can we get Cenk on the end of those passes?’, ‘If the pass is unsuccessful, can we win the 2nd ball?’, ‘Will we have the players & shape to stop a counter?’. These are all questions the gaffer must face, although I must admit I’m giddy at the possibilities! 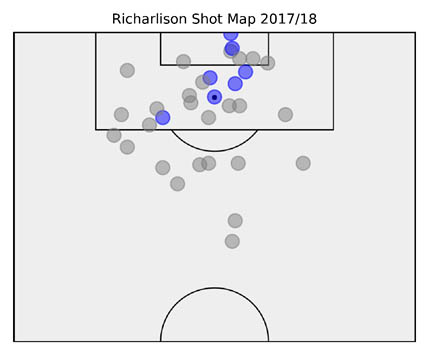 Off the ball, Richarlison loves to move into the central areas & take his chances from inside the area. Hopefully now, with the addition of Bernard who is superb from the left side, Richarlison will have a license to roam infield when we’re in possession & give opposition defences even more to worry about. 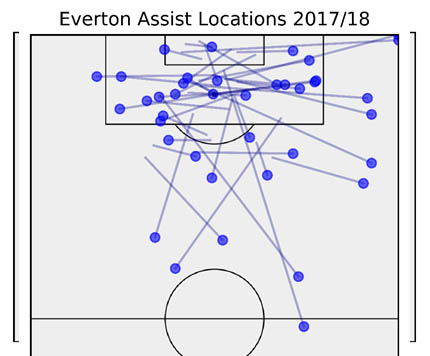 This one may seem bit messy at first, take a closer look and the lack of assists made from wide players last season is disturbing. You would’ve thought Brands & Silva have recognised this hence the arrivals of Richarlison, Bernard & the reluctance to let Ademola Lookman leave.

If we’re going to be an offensive threat this season we need width, simple as. Last season without any wide players & 2-3 number 10s playing in the same team we became to easy to play against. Any attacking force worth their salt has quality on the wings, to #1 be a source of creativity and chances & #2 stretch the pitch as wide as possible to create space for our central options. 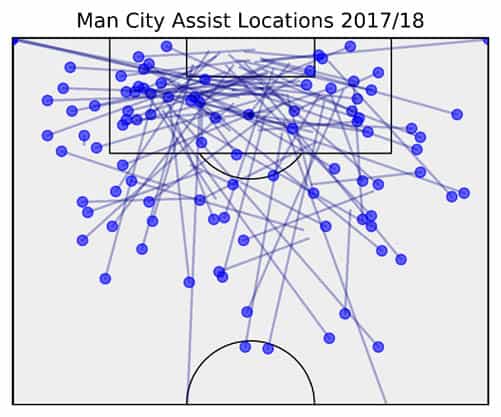 I decided to throw Man City’s figures together to see what a champions assist map may look like, not surprisingly… it looks good, really good!

The first word that screams out to me when I see this is ‘Balance’, City have the players in the wide areas to cause damage, something we have added to our arsenal this summer. To be a well-balanced side, a side that can cause dangerous scenarios all over the pitch, you need quality central players that have the ability to shift the ball from side to side, thus creating overloads on the wings (2v1/3v2).

Given the additions we’ve made in the wide areas & the quality we possess with Gylfi, on the offensive we are more than capable of churning out assists from anywhere in the final 3rd… Although I am desperate for us to sign a ‘Quality’ Central Midfielder, some one in the mould of Dani Parejo *cough, cough*.

This season, one of my main worries is that we don’t have the players to keep the ball for long periods of play & there’s nothing wrong with that… if you’re well organised.

The signings we’ve made this summer indicate to me, that Marco Silva is setting up for high pressing-counter attacking system. If we’re able to keep our defence organised with Mina & Digne both used to playing a high line defence, Richarlison & Walcott pressuring the opposition full-backs & Gana Gueye/Tom Davies not letting the David Silva & Mesut Ozil’s of the world play their game… We might just have some success.

If we’re able to play the way an Everton team should play, and channel the raw talent & belief correctly… I challenge any team to play us under the Goodison lights!

Now it’s all set and done, we’ve got our players in & shifted a lot of deadwood, we seem to be going back in the right direction… after last seasons derailment. The game this Saturday against Wolves should be a solid test against a well organised team that have some real magicians amongst them.