Those always content with an Evertonian at the helm despite his lack of capital are pleased Bill Kenwright will stay on while the supporters desperate for that much-needed cash boost have also got their wish.

If only we had a few more quid, we’d be alright. I doubt there’s a Blue alive who didn’t think this during the pre-Moshiri years of financial hardship that covered the reigns of Smith, Moyes and Martinez. 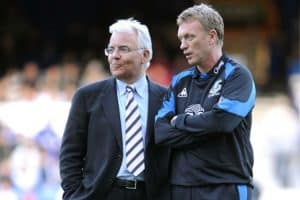 The reasoning was seductive. The big clubs had more money than us. So, if we had more money we’d be like them. Those who knew their history could point to the past too, the era of the Mersey Millionaires, when big spending Everton married wealth with success. There was proof within a Blue context that money mattered.

But how wrong we were. It turns out that all the Everton tropes of the modern era, frustration, disappointment and anger have proven resilient in the face of cash, inured to its transformative properties.

Since February 2016, when our benefactor first arrived at the club, over £200m has been spent on players. Contextualised, this is not as large an amount as it seems. As fans, we need to take into account money brought in from sales, the fact that much of the club’s transfer spending  has been undertaken during a period of hyper-inflation in the market and that compared to the peers we hope to compete with, it’s a relatively modest amount.

But despite those mitigating factors, it’s still a lot of money when set against our spending in the recent past. In the dark days of the Smith-era, through the hard up years of Moyes and into the early sunshine days of Martinez’s reign, Everton could only dream of spending so freely.

During this period, transfer windows at Goodison were often frustrating affairs. Take the summer of 2011 as a particularity dispiriting example. Back then, the club’s only signing was the on-loan arrival of the Argentinian forward Denis Stracqualursi from Tigre. His was the signature that nobody was competing for.

Although the most extreme example of Everton’s cash-strapped existence, that window was reflective of an air of penury that hung heavy over the club.

When Moshiri arrived it had been a generation since Blues had seen the club spend with abandon. The Peter Johnson era, which spanned the mid-1990s was the last time that Everton had possessed serious cash. But since Johnson had turned the tap off (sometime during the summer of 1997), with the exception of a few ill-advised, debt fuelled splurges, Everton had remained stubbornly hard-up.

And yet, through much of this difficult-era, the club had spent well with what little it had. Particularly under Moyes, Everton gained a reputation for unearthing gems in the market, who arrived for next to nothing by the standards of the time. Cut price players, like Tim Howard, Tim Cahill, Mikel Arteta, Leighton Baines, Phil Jagielka, Steven Pienaar and Seamus Coleman, to name just a few, enabled Everton to compete amongst the best, despite having a vastly inferior transfer budget. 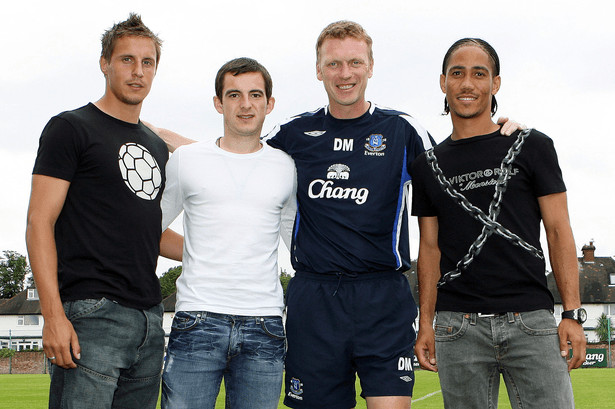 Mistakes were obviously made and there were arrivals who floundered. But despite this, by and large, what Everton did was a success. The club punched above its weight because it was so careful with the money it spent.

Sadly, such prudence seems to have completely vanished at Goodison with the arrival of Moshiri. In the past few years, and particularly during the summer, Everton appear to have spent with abandon. The club has splurged, buying players it fancies irrespective of whether the player in question was actually needed.

Whereas once the club identified a problem area, scouted affordable options and then made a targeted offer, today the club appears to simply buy without reason. This is why Everton entered the campaign with one left back in the squad and four right backs. Why, the season began without a recognised centre forward. And why, it recruited several players who are unable to play together as they operate in roughly the same position.

And perhaps worse than the above, Everton have also become cavalier with the players that have been recruited. Whereas once a struggling arrival would continue to feature (because the club could not afford to spend again), today new signings are cast aside without being seriously tested.

The amount of game time given to Klassen this season has been a disgrace. Although there is no question that he struggled early on, to write off the Ajax captain so comprehensively is criminal. That would never have happened back in the time when Everton were less able to sign replacements.

Whereas once the club was defined by a long term approach (recruitment was planned, players were coached and given time, the manager had the backing of the board to build), today short-termism reigns. The transfer policy looks haphazard and erratic, players are discarded for not being instantly successful, and managers seem a few defeats away from being shown the door.

Money, or more specifically its sudden arrival, has harmed Everton. Perhaps after so many years of penny pinching, this was inevitable. Like a lottery winner buying expensive cars and speedboats, maybe the club found it hard to cope with the sudden arrival of options, something that serious money provides. Money has overwhelmed Everton to the point where reason has fled Goodison.

But it can’t go on. Two other recent examples of clubs that have behaved in a similar manner, buckling with the arrival of  cash, are Aston Villa and Sunderland. Like Everton, their planning and sense of a long-term perspective dissipated as their wealth increased, replaced instead by a wretched short-termism that crippled both clubs, leading eventually to relegation (and in Sunderland’s case, a possible double relegation.)

If Everton want to get out of this mess then something has to change. The club needs a structure and model in place (whether that be a manager with total control or a director of football) that restores what once made this club so impressive. And it needs to make the change quickly.

The past 18 months have proven beyond doubt that the current set up at Goodison is fundamentally flawed. Everton are a mess and stark reminder to every club that money is not all you need in football.

I don’t recognise the club today. This is not the Everton I have come to know. Shallow, short-termist and ugly, Everton under Allardyce and Walsh are an embarrassment. Our club used to do things differently, used to be a shining example to others of what could be done without the backing of Russian billionaires, Middle Eastern sheiks or American hedge funds. It used to be something to be proud of.

We might have money today but that doesn’t mean we have to give up what once made us so impressive. We need that old Everton back. Because if we don’t, not only do we risk losing our identity, we also run the risk of becoming the Sunderland of tomorrow.