There is some discouraged Evertonians right now.

Agree with this fella, Evertonians? pic.twitter.com/01WQ1nZT3N

Today’s Everton fancam is in here.
Here’s a taster of what it’s like.https://t.co/8gA8WCTxWW pic.twitter.com/xWyuiWmgoi

Against a backdrop of early optimism, a string of below-par performances, off field shenanigans with headlines around Rooney, Barkley and Mirallas and the transfer window closing without the prerequisite signing of a striker have left some Evertonian’s feeling pretty despondent.

Even Ronald Koeman himself seems a little downtrodden about his club’s prosperity.

Speaking after being taught a footballing lesson from Spurs, Koeman spoke about unrealistic expectations and how top six for Everton remains a challenge.

Not the comments you want from a manager who has just spent billions. *cue argument over exact amount and NET spend*

Common ‘shouts’ from fans on GrandOldTeam and beyond bemoan the consequence of failing to bring in an “out and out”, top quality striker.

Others point to a lack of pace throughout the side and there’s discussion around whether there’s room to accommodate both Rooney and Sigurdsson in the same side. The futures of Kevin Mirallas and Ross Barkley continues to bubble away, with some pointing to Koeman having paid the price for pissing on the chips of almost everyone at Valencia.

Others are simply left wondering “What’s the plan?” as Everton appear to turn up every week with a different setup, and play almost as though on a whim.

It’s easy to point at problems, but of course it’s a little more difficult to find solutions and that’s why I’m not going to try and offer any. Ronald Koeman’s earns his £6m+ a year to do just that, while I’m sat here in my boxies on a Sunday evening typing an article on GrandOldTeam.

What I will endeavour to do, is try and conjure up three plausible explanations towards why Everton look so jaded – with the hope it’ll hold a mirror up to some of the more voracious Evertonian’s questioning Ronald Koeman.

On Saturday, in Pickford, Martina, Keane, Klaassen, Rooney, Sigurdsson and Ramirez – Everton started with SEVEN summer signings – contrast that with Spurs, with just one new arrival in their starting eleven.

Is it any wonder Everton look so fractured? We’re not far off a team of strangers.

Everton were in a league of their own last season – sat in 7th, 15 points clear of 8th and 8 away from 6th.

We needed to make big changes to have any hope of competing with the teams above us.

We’ve made a lot of those changes and the new lads need time, and opportunity to perform before being so readily, and conclusive written off.

You don’t give a manager the autonomy to make such sweeping changes and then look to change it after four league games, more so considering the opponents in those games;

Still, Everton’s start to the Premier League is eye-watering…

With Man Utd (A) up next – results wise, could we have realistically expected much more? Performance wise is another question…

Not to mention the sprinkling of Europa games presenting it’s own challenge on top of trying to blend together a new team.

Although it is defeatist – all considered, it feels as though we need to “get through” a difficult period, and look to build some momentum in the Europa League and League cup, before successive league games against Bournemouth, Burnley and Brighton. A team growing in familiarity, with some positive results in succession could really see us kick on.

There’s no skirting around this – not bringing in another striker was a considerable failing from Everton’s board.

We’ve brought in the likes of Sigurdsson and Rooney, and without doing a disservice to Sandro who is an unknown quantity, have no target man.

As in previous windows, Koeman was left talking up the desperate need for a striker only to be left with egg on his face – in previous windows it resulted in a last second desperate loan move for Enner Valencia, and now bringing Oumar Niasse back into the first team fold.

We’ve known Lukaku was leaving for some time but completely failed to even try and r̶e̶p̶l̶a̶c̶e̶ ̶h̶i̶m̶ – mitigate the loss – how many more transfer windows is Farhad Moshiri going to allow the team he has in place to not meet the public requirements of the manager?

I’ll conclude then with a question.

What is the minimum expectation, both league and cup performance of an Everton manager of which failure to achieve should cause dismissal.

Keep that in mind, and see where we are in January at the earliest. Not now. 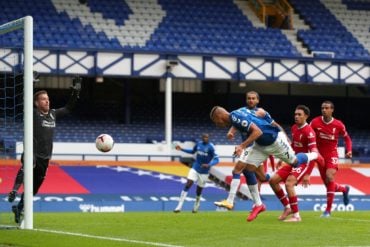