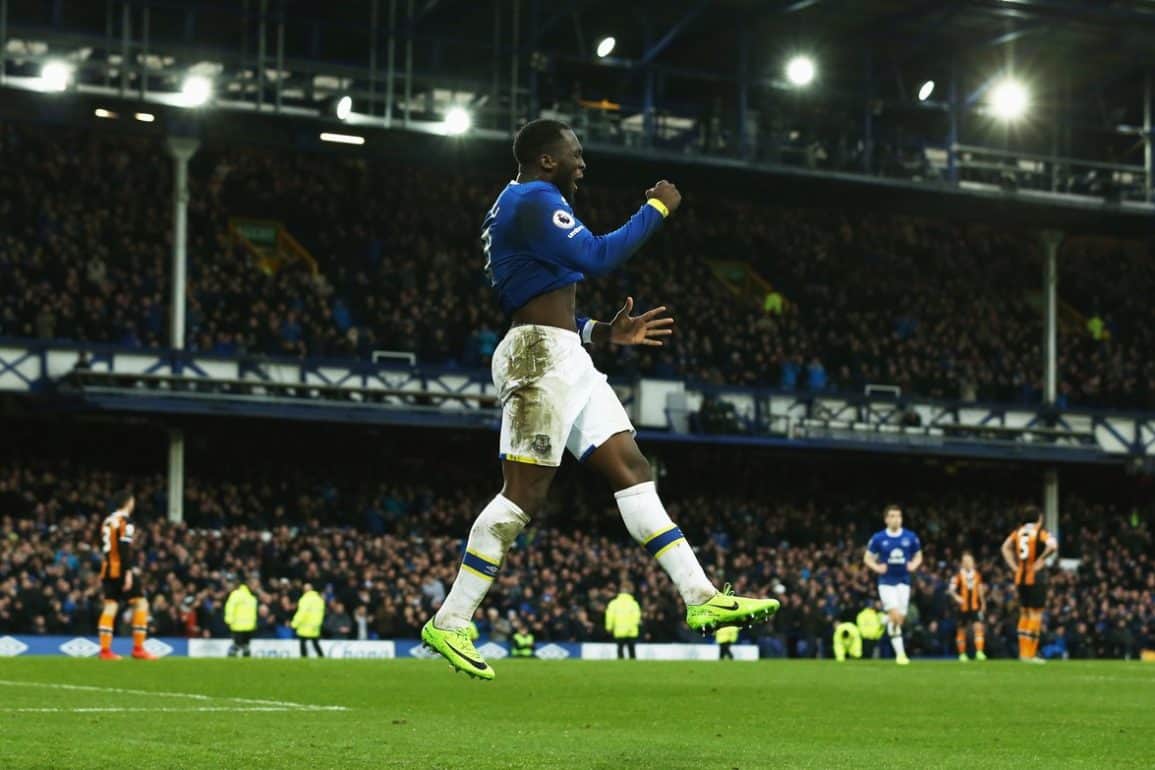 Brief summary… Another three points as Everton eventually put a hard working Hull away, with maiden goal for Calvert- Lewin and a brace for Romelu Lukaku.

Ronald Koeman resisted any temptation to drop Romelu Lukaku, keeping faith with the leagues leading scorer as the Blues looked to move into sixth place even if only for 24 hours. He made changes to the eleven that began against West Brom in selecting: Robles, Baines, Williams, Jagielka (C), Coleman, Gueye, Schneiderlin, Davies, Barkley, Calvert-Lewin and Lukaku.

The referee in charge was Paul Tierney.

A damp and breezy afternoon at the Old Lady but, the pitch looked in perfect condition for some slick attacking football and with Calvert-Lewin up alongside Lukaku, Ronald Koeman appeared to have set the team to play with two up front with Barkley and Davies to push forward too.

The Blues opened the scoring on eight minutes as a searching through ball from Barkley found Davies in space on the right flank inside the Hull box and his inch-perfect cross was swept home confidently from seven yards by DCL.

A Lukaku flick-on gave Coleman a shooting chance and his half volley was saved at the foot of the post. Good defensive cover from Baines denied Markovic and the ex-RS skied his next effort high over the bar.

Schneiderlin was spraying balls around and setting the tone for much of the Everton play, but the next good move was starred by Jagielka as he won the ball in our box and found Lukaku on the left. The Belgian played a sweet cross field ball for DCL and he excellent turn bamboozled the Hull marker who immediately blocked his progress.

A tempting low cross from the right by Barkley unluckily evaded both Davies and DCL as the Blues continued to dominate possession.

Everton were denied a second goal on 23 minutes as a late offside flag ruled out a curling shot from Lukaku after a lovely pass from Gueye.

Disappointingly, Morgan Schneiderlin limped off on 28 minutes to be replaced by Gareth Barry and this disrupted the team somewhat, no offence to GB.

Williams got caught in two minds and that allowed Clucas to nip in and lob the onrushing Robles, thankfully the ball cleared the crossbar.

The final action of a half that Everton had dominated saw Davies burst forward on the left and push a through ball for Barkley that was a tad too strong for the recalled England international.

The first ten minutes of the second half were massively forgettable until a break saw Barkley release Lukaku away on the right. The big man cut inside and fired a shot just over the bar.

Funes-Mori came on for DCL on 55 minutes and Maguire denied Barkley with a goal saving challenge.

Everton then had Koeman fuming on the touch line as they were forced back from the Hull area all the way back to Robles.

Baines then fired a long cross field ball for Lukaku to collect, beat his man and sting the goalies fingers with a rasping drive.

Grosicki replaced Davies for Hull on 64 minutes ahead of Williams seeing yellow for a professional foul on Markovic. Some tough tackles were being made on Barkley and Davies, and one too many by Huddlestone on Gueye saw the red card brandished on 72 minutes.

Ener Valencia came on for Tom Davies two minutes later and with his second touch of the ball doubled the Blues lead, taking a sweet chip over the back line from Lukaku to round the keeper and net.

Barry saw yellow for pulling back Markovic and Hull brought Diomande on for Hernandez for the final nine minutes.

As the fourth official was preparing to signal four extra minutes, Everton made it three nil as Gueye to Barry, to Barkley saw the ball laid perfectly into the path of Romelu Lukaku and he slid home majestically.

And as the Hull defence fell apart, Lukaku added an injury time fourth to the adulation of the crowd.

Final summary.
Hull made Everton work hard for these three points, but the better quality and class of the Blues eventually earned the rewards. Barkley worked hard throughout as did Lukaku who got the goals we desperately need to retain.