By GrandOldTeam
Everton News
4 years ago

#2 – Looking for the Toffees: In Search of the Heroes of Everton by Brian Viner

James Oakley reviewed Brian Viner’s Everton Book, Looking for the Toffees: In Search of the Heroes of Everton for us last year;

I wasn’t yet born when the 77-78 season kicked off so I was unsure how I would get on with Brian Viners look back at one of his favourite seasons in “Looking for the Toffees“. Although the likes of Bob Latchford, Andy King, and Duncan McKenzie are familiar names to any Evertonian, my earliest heroes are 10 years later when Sheedy, Sharpe and Cottee were the Gwladys street favourites. I needn’t have worried as the book is a much broader look back at football in the late 70’s, an era where George Woods could be found cutting the lawns in your local school, and a time when Bob Latchford winning £10,000 was memorable stuff. 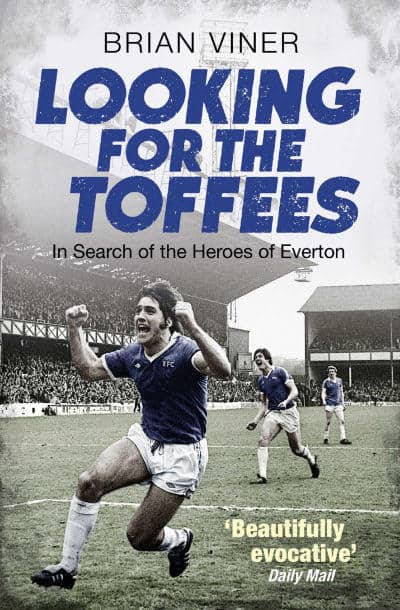 The first interview starts in a pub car park with Bob Latchford and you get an immediate sense of just how different life was as a player in 1978 to modern day. The influx of money with the rise of the Premier League and Sky has created a gulf between players and the fans and set the majority of modern players up for a life where money will never be an issue. This wasn’t the case in the late 70’s where top earners were getting £500 a week and had to think carefully about their lives after football. Not that any of the ’78 squad are on the bread line, infact some have stayed working in football with Dave Jones managing at the top level, and George Wood the goalkeeping coach at Crystal Palace.

As the book progresses and Viner manages to track down the majority of the team you get the sense that although football was very different back then, not one of the players would swap to be a modern pro. The enthusiasm with which they speak about the era makes you realise that although the quality of the game has improved the actual experience of playing, and the relationships between player and fan has gradually eroded leaving a totally different game.

The interviews with Andy King, and Martin Dobson are particular highlights, as 2 completely different personalities remember the highs and lows of the season and the book becomes genuinely laugh out loud funny as they enthusiastically recount stories, and tales from the F Troop days. Every player which contributed speaks highly about the club whether they were true blues like Mike Lyons or more short term like Mike Pejic, and the relationships they had with the fans, and the continued work that the Former Players Foundation does makes you realise the meaning behind “Once a Blue, Always a Blue”

You can buy Brian’s book below;