Brief Summary… Romelu Lukaku helped himself to a four-goal haul as Everton blitzed Bournemouth before defending lethargically and allowing the visitors a sniff of a chance.

Eddie Howe for his part has seen his Cherries go into something of a slump and he picked: Boruc, Francis (C), Cook, Mings, Fraser, Arter, Surman, Gosling, Pugh, Wilshere and King.

Checking the watch and blowing the whistle was Mike Jones.

Everton were in front with dozens still finding their seats as Schneiderlin and Lukaku exchanged passes before Lukaku cut in from the right and fired a peach of a left footer that Boruc didn’t get close to… 30 seconds gone, one-nil to the Blues.

With Ademola Lookman n the starting line-up for the first time, there were no signs of nerves from the young man and a fine left wing move involving Baines, McCarthy and Lukaku saw lovely dragback and turn almost produce his second home goal.

Despite the early setback, Bournemouth settled well and Wilshere set about trying to get them back into the game with King often the target man, and offering a warning to the Everton defence.

A superb turn and through ball by Barkley found Lukaku, but Mings stood firm and cleared the danger. But the Belgian was seemingly on a mission and on 23 minutes, he bullied his way from the right past two defenders before laying a sublime cutback into the path of the on-rushing McCarthy whose first shot was blocked, but the rebound bounced nicely back off his leg and past the stricken Boruc.

Barkley was working hard and biting into tackles, something he’s previously been accused of shirking, but not today and when getting forward, the link play with Schneiderlin, Barry and McCarthy was at times mesmeric. The Everton midfield was certainly fluid and must have been giving Eddie Howe a genuine headache in how to cope with the movement.

As if to illustrate the fluidity in Everton’s play, Williams went on a long foraging run that aw his link well with Lukaku before finally running out of steam in the Bournemough penalty area.

Everton were on top, but not totally dominant and the hungry-for-success supporters were a little surprised that more was not being made of the opportunity Bournemouth were presenting.

Any worries though were banished just before the half-hour mark when a disastrous pass from Francis presented Lukaku with the kind of chance forwards must dream of and he consummately chipped Boruc for 3-0 and game over… or was it? 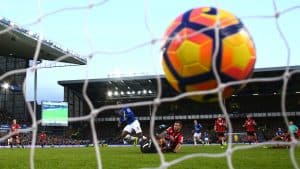 Even at three goals down, the visitors would not lie down and accept a crushing defeat as Wilshere saw a 20-yard effort deflected for a corner and Robles had to make smart save to deny Cook.

Eddie Howe made two changes during the interval, hooking Gosling for Ibe and the captain Francis for Smith.

Wilshere was soon on the front foot taking a pass from the diminutive and energetic Fraser before seeing his effort go wide. Schneiderlin was booked on 49 minutes for a 50-50 challenge right under the nose of the referee, much to the annoyance of the home crowd.

A surging run by Barkley saw a one-two with McCarthy before his powerful shot was deflected agonisingly wide. A fine long ball from Coleman found Lukaku is space down the right, but Boruc was quickly off his line to deny the big man a shot on goal.

A Barkley free kick was only partially cleared and the ball fell nicely for McCarthy whose instant volley was well held by Boruc.

Just before the hour mark and the Everton defence began to nod off and somehow King was able to waltz into space and reduce the arrears with ease.

Everton responded with Barkley again finding McCarthy well forward only for the legs of Boruc to deny the Irishman a second marker. McCarthy though appeared to be tiring and Ronald Koeman brought him off on the hour sending Tom Davies on in his place… and he was quickly into the action surging forward to win a corner.

Incredibly, it was Bournemouth who scored again on 69 minutes as Fraser found space on their right flank and his cross to the edge of the six-yard box found King with more time than he could have imagined he’d get and alarm bells started go off as he netted for 3-2.

Koeman instantly withdrew the impressive but tiring Lookman for the more experienced Mirallas, but it was now the visitors looking more the likely to score and Robles made a fine save to deny Arter an equaliser.

Inexplicably from where I was sat, Robles was booked a minute or so later and then Davies too saw a yellow card for handball. The blond-haired midfielder then fed Mirallas for a shot that went straight at Boruc.

Mason Holgate replaced Gareth Barry and the Blues went to 3-5-2 to shore up the midfield and straighten out the defending that had gone everso slightly pearshaped in allowing Bournemouth two goals and hope.

Inside the final ten minutes and Everton decided a period of possession was needed to calm things down and after a couple of minutes and countless passes, Lukaku fed the ball wide right for Coleman before heading into the box and take up the perfect position to receive the cross and fire home a clinical hat-trick strike on 82 minutes.

Afobe replaced Pugh during the celebrations and the home crowd had barely re-taken their seats when they rose again in exultation of a delicious backheel from Barkley that released Lukaku through the middle and he gave Boruc no chance for his fourth of the game a 5-2 lead.

Still though, the game and goalscoring wasn’t finished as Bournemouth got forward down their left and somehow Arter got past Williams and despite the ball appearing to cross the line after his short-range shot had hit the post, he poked it home and it was 5-3 with normal time about to expire.

Everton finally put the rubber stamp on the goalfest as a long ball from Funes Mori found Barkley in space and he rounded Boruc, celebrated and then slid the ball into the empty net to complete a fine personal showing and a thrilling 6-3 victory.

A game that should have been over at the interval burst into life second half as Eddie Howe and never-say-die Cherries made a helluva fist of a fightback and all credit to them for it too. But on the day, Everton were not going to be stopped.

The early goal set the Blues on their way and the four-man midfield of Barry, Schneiderlin, McCarthy and Barkly had too much fluidity, energy and class for the visitors to cope with. The movement and ease with which they linked and swopped positions was at times a joy to behold and better teams than Bournemouth would have struggled to contain them.

Joel Robles needed to be at his best on a couple of occasions and Ronald Koeman will probably want to have a few words with the defence over the slackness that gifted Bournemough three goals.

Ademola Lookman showed no nerves at all and some of his one-touch play was highly encouraging, this young man has a massive future ahead of him in the Royal Blue… and what more needs to be said about the goal machine that Romelu Lukaku is when he’s in this kind of mood.

At times today, he was simply unplayable and but for a couple of underhit passes and some timely defending, he could have had at least two more goals today.

With four goals to his name and leapfrogging Costa as the leading scorer in the Premiership, Rom will undoubtedly earn all the plaudits and romp the MotM poll.

My personal choice would be Ross Barkley – his all-round effort today was simply incredible. He was hungry for the ball, linked well, bit into tackles and capped his day with the final goal.

And if we needed anything else to celebrate today, Oumar Niasse scored against you know who lollol