Upon hearing the first rumours of Everton’s interest in Belfodil back at the start of January, the name sounded a faint bell of recognition. This was more than can be said for most Evertonians, who had simply never heard of the Algerian striker. I’ll admit, I’d almost entirely forgotten who he was, as his initially promising career seemed to fizzle out almost entirely. That is until his rebirth at Standard Liege, where he has scored 10 goals in 21 games, including 3 in 5 in the Europa league. Having done a little digging, I’ve updated myself on the recent career path of Steve Walsh’s top target, seeing what the Algerian frontman has to offer Ronald Koeman’s side. 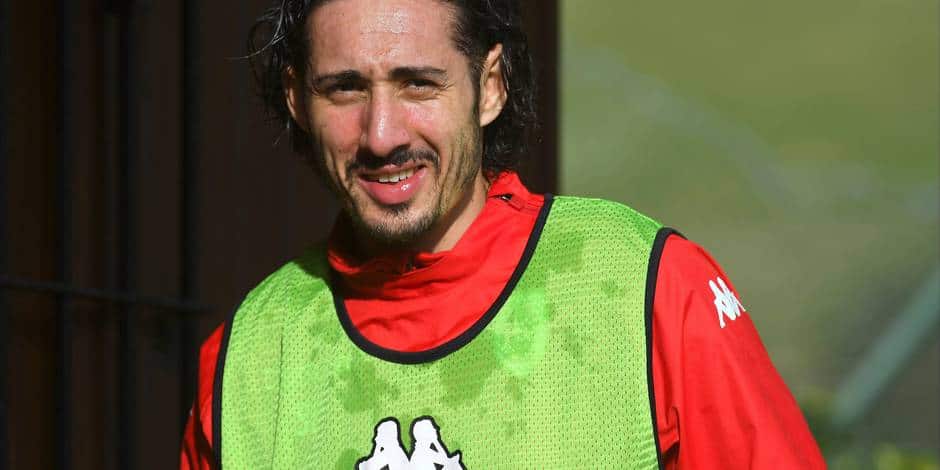 Ishak Belfodil, (pronounced Ee-Zach Bell-for-deal for those who care and are struggling), came through Lyon’s highly respected youth set up at Tola Volage, having hopped between a number of clubs including PSG during his youth. The Lyon academy boasts numerous talented graduates, such as Karim Benzema, Hatem Ben Arfa and Loic Remy among others. Belfodil was part of a gifted group of young players whom former Aston Villa coach Remi Garde offered first team opportunities to. The group in question included Alexandre Lacazette, still at Lyon and now one of Europe’s most wanted strikers. One of Belfodil’s former youth coaches at Lyon, Robert Valette, saw his potential and highlighted his size as a key asset to his game. He likened his stature to Zlatan Ibrahimovic, a generous comparison that Belfodil would be prosperous to justify. He debuted in 2009 at 18 against Auxerre, given the impossible task of filling Karim Benzema’s shoes. Both French/Algerian strikers, Belfodil struggled to live up to the expectations set by the Real Madrid bound superstar.

As Belfodil’s teammates from the academy such as Lacazette, Clement Grenier and Rachid Ghezzal were given first team opportunities, he became quickly frustrated. Lisandro Lopez and Bafetembi Gomis stood in his way of a regular first team spot in attack. Belfodil moved to Italy in 2012 where he joined Bologna on loan, then Parma on a permanent basis. After a decent season at Parma, he was snapped up by Inter Milan on the 5th July 2013 for €5.75 million. It was a complex transfer, as Inter purchased 50% of the player’s rights, valuing the Algerian at €11.5 million, (the same fee Everton are said to be paying now). He was unveiled to the press alongside one Mauro Icardi, another team mate of Belfodil’s who would go on to achieve bigger and better things. Icardi, like Lacazette, showed Belfodil a path of success that he could have followed himself, had he had more luck and applied himself more effectively. His arrival at Inter was understated to say the least. Gone are the days when Internazionale would unveil a Brazilian superstar such as Ronaldo. They had instead signed a modest, raw and relatively unproven talent. The fans hadn’t particularly heard of him, some joking that they though his name sounded like a medicine.

Belfodil again became impatient due to an uneventful period for him at Nerazzuri. He featured in just eight games for the club, failing to score in any. Belfodil said himself that, at such a vital age (21), it hindered his development to only come on for 10-15 minutes at the end of a match, and that he was learning nothing. He was loaned to Livorno, where again he failed to score, this time in 17 games. He eventually returned to Parma in the 2014-15 season, however his second spell did not go as smoothly as his first. His time in Serie A came to a disappointing end in 2015, having featuring for 4 different clubs in 3 years, it was time for pastures new.

His next destination; Baniyas Club in the UAE. Eyebrows were raised by those who still had hopes for Belfodil and his promising yet fading career. He only spent one season in Asia, reaching a goal tally of double figures for the first time in his career. He was then presented with a new lease of life by Standard Liege in Belgium. Standard offered him not only another chance at playing in a more competitive league, but the opportunity to play in Europe. Six months into his spell in Belgium and he hasn’t looked back, scoring almost 1 in every 2 games for the club, including an impressive brace away from home to Panathanaikos in the Europa League.

Belfodil’s playing style is intriguing. He is not a natural finisher, although he thrives in a more central position. He has been farmed out into wide positions, particularly on the left hand side, allowing him to cut in onto his right foot. His erratic finishing, added to his lack of express pace makes him unsuited to this style of play. He’s a strong dribbler, hence his utilisation out wide, however his height and size, as pointed out by his former youth coach, make him a real asset in the box. His goals for Standard have come from a central position, scoring lots of headers in particular. He has a bizarre knack for missing penalties, which started at his time in Lyon. “I don’t understand!” he explained, bemused and mystified when he was asked why he missed them so often. A mystery to Belfodil himself, he needn’t practice them too often, as Everton are currently blessed with an abundance of willing penalty takers it seems. He won’t be fighting with Baines and Lukaku for the glory any time soon.

Standard Liege manager Aleksander Jankovic has nothing but praise for his forward. He describes him as a “super guy”, highlighting his work rate and humility, as well as identifying his experience in Italy as being key to developing him into a more well rounded player. It certainly shows in his game, he has got good awareness and technical ability, improving his link up play and exploiting his imposing physique. His ideal position is still debated, but it is certain that he poses a strong threat up top. For Everton, he’ll be perhaps most effective just off Lukaku, creating space and running at players, whilst most importantly getting in the box to add a much needed goal threat. His goal record suggests he is bought to be a foil for Lukaku, bringing him more chances and goals, naturally to the team’s benefit. It looks as if Belfodil will play the role intended for Gabbiadini, who shares a similar goal record and qualities.

His price has been touted from £10 million, to as little as £3.5 million. Quite a difference, but even the higher price tag does not pose a significant risk in todays market. A striker of Belfodil’s age and ability could fetch much more, and it is the same fee he was valued at when Inter signed him three and a half years ago. His performances this season certainly justify the fee that Moshiri can easily afford. He has not been selected for Algeria in this years AFCON, which does raise some questions. One could argue that someone not deemed good enough for the Algeria squad is surely is not good enough for the Everton first team. However, as many have been quick to reiterate, our trust must be placed with Steve Walsh, whom a lot was said about prior to his arrival from Leicester City. He has already proven his worth for many with the acquisition of Idrissa Gueye for £6 million. If Belfodil brings over his performances from Belgium, this piece of business could prove just as shrewd.

Belfodil comes with little expectation given his price tag and turbulent career path, however Walsh may have potentially unearthed an overlooked gem like he did with Riyad Mahrez. Mahrez came to Leicester as an unknown quantity from Le Havre, but Walsh saw enough in him to offer a chance at life in England, and the rest is history. If Belfodil is half as successful as his compatriot, then he’ll be a resounding hit for Ronald Koeman’s blues in transition.