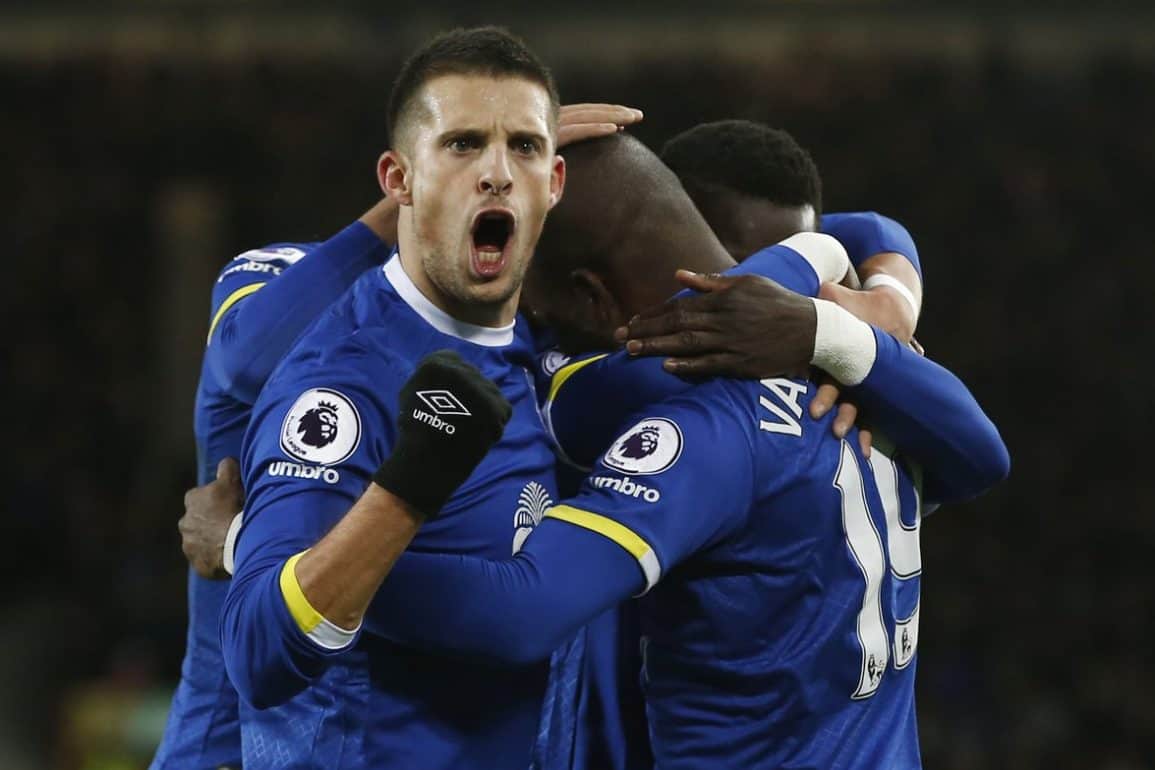 Enner Valencia, Leighton Baines and Romelu Lukaku on the scoresheet as Everton run out comfortable winners in a 3-0 victory over Southampton at Goodison Park.

Brief Summary… A maiden goal for Enner Valencia, Leighton Baines laying down the law for the penalty taking responsibility and a right foot shot of raw power from Romelu Lukaku saw the numbing blandness of the first half forgotten as the Blues kicked off 2017 with a deserved win.

With Goodison bathed in winter sunshine and an almost full house attendance, Everton eventually overwhelmed Southampton with a tremendous last half hour.

Both sides were forced into early substitutions are Stephens replaced Cedric who’d crashed heavily into the advertising at the Gwladys Street End and disappointingly, Dominic Calvert-Lewin left the game barely eleven minutes in due to what looked an ankle injury, Kevin Mirallas taking over. Calvert-Lewin subsequently left Goodison on crutches, so let’s hope that’ precautionary.

The first half was largely forgettable as neither side could find any rhythm and with the atmosphere somewhat subdued, the play lethargic and disjointed, there was little to get excited about.

Everton had more possession and tried to force things, but the only saves Fraser Forster in the visitors goals has to make were from an early Ross Barkley shot and then to deny Lukaku on the end of a flowing counter attack by the Blues.

At the other end, Joel Robles palmed away a deflected Rodriguez effort on 38 minutes and the same player blazed over barely 90 seconds later when a sweet turn on the edge of the box made space for the shot.

Neither side made any further changes at half time and despite a better effort, the play was still somewhat disjointed and not making for great yuletide entertainment.

That was to change on 61 minutes when Ronald Koeman sent Enner Valencia on for Aaron Lennon who’d worked hard, but achieved little of any note offensively.

The introduction of the West Ham loanee saw an injection of pace through the middle, a foil for Lukaku up front and allowed Ross Barkley to play a bit wider on the right flank to link with Seamus Coleman.

Tom Davies who’d had a decent showing began to grow even more into the game and a fine through ball for Valencia saw a cross go behind Mirallas as he looked to pull the trigger. A good through ball from Williams found Lukaku on the right flank, but he screwed his shot across the face of the goal, but the signs of improvement were showing.

Southampton replaced Tadic with Boufal on 66 minutes and the next action saw Robles stand firm to deny Redmond.

Into the last twenty minutes and finally, the breakthrough came as Forster saved awkwardly from a Lukaku header and Enner Valencia was on the spot to sweep home the loose ball inside the six-yard box on 73 minutes.

Saints sent on Shane Long for Clasie in an attempt to worry the Everton back line.

Mirallas rode a midfield challenge to feed Rom only for the shot from 20 yards to go just over, but Everton now seemed eager to stamp some genuine authority on the game.

A move started way out on the wide right by Barkley eventually worked its way to the left and when the ball came into the edge of the box, Valencia was bundled over and the ref earned 38,000 new friends as he duly pointed to the spot. Seamus Coleman presented the ball to Romelu Lukaku, but stand-in skipper Leighton Baines literally ripped the ball out of the Belgians grasp to claim the rights.

Lukaku looked somewhat taken aback, but Baines proved his point by comfortably bottom left hand corner while Forster went in the opposite direction.

Gareth Barry replaced Ross on 83 minutes who got a standing ovation for a hard-working performance that hadn’t always gone the way the Wavertree born player had hoped. But, whatever criticism Ross faces from time to time, the one thing he could not be accused of today was hiding. He constantly wanted the ball, and constantly looked to make things happen, some they didn’t but he kept on going and his effort level will surely have been noted by the manager.

Ashley Williams made an outstanding goal-line clearing header to protect the clean sheet and the Blues wrapped up the three points with a crunching third marker on 88 minutes.

Bainesy broke up Saints in their own half, the ball falling nicely into the path of Tom Davies who played an instant pass into the right flank channel for Romelu Lukaku to run onto and smash an unstoppable right foot shot high into the roof of the Gwladys Street goal giving Forster absolutely no chance.

For certainly the first half and the early stages of the second, this game failed to excite the Goodison faithful, but once we got rolling following the introduction of Valencia, there was only one team that looked like scoring and winning.

Choosing a MotM today could be tricky. Ross worked hard, Gana Gueye was combative as ever and Tom Davies certainly staked a claim for a starting role while IGG is away at the AFCON tournament.

We can and must play better, we must and can play with a higher tempo and intensity – the last half hour proved that.

Seven points from nine over Christmas and New Year is not to be sniffed at, and most probably were not expecting that haul in the aftermath of the ‘derby’.

Everton need to build on this Yuletide; the FA Cup begins next week, and Goodison will surely be up for that.