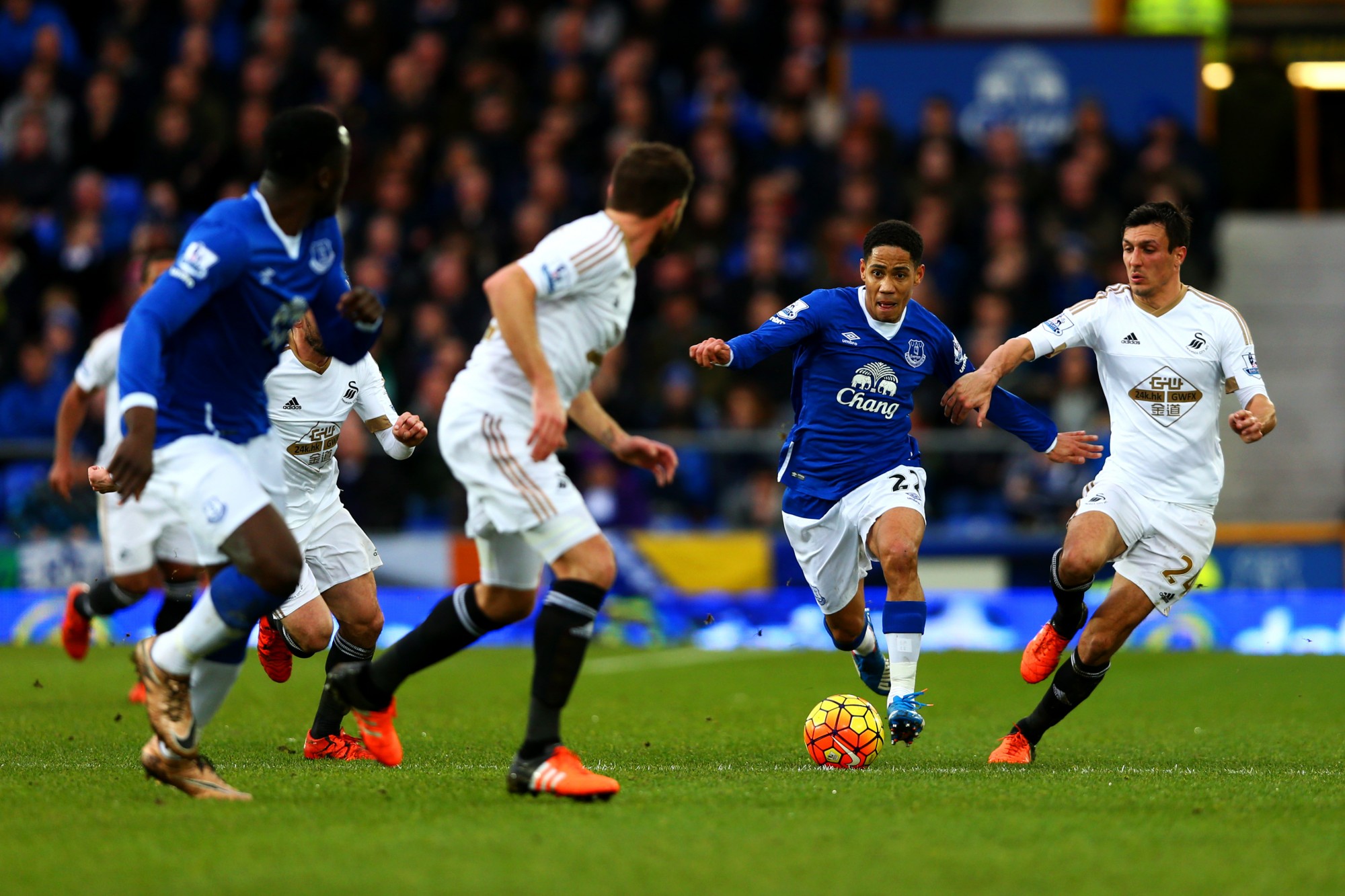 Back to reality, and oh boy, there goes gravity. The Chelsea humiliation will go down as one of the games those of us with weak stomachs turned off after half time. A veritable The Exorcist of games, people throwing up all over the show, exiting the Cinema and too demoralised to demand their money back. Fivegoals, all fairly unstoppable highlighting the gulf in class, in dollars, in sense. Hazard took us apart, Costa celebrated in our faces and to not even muster up a single shot on target pains even the most optimistic of us to our core. 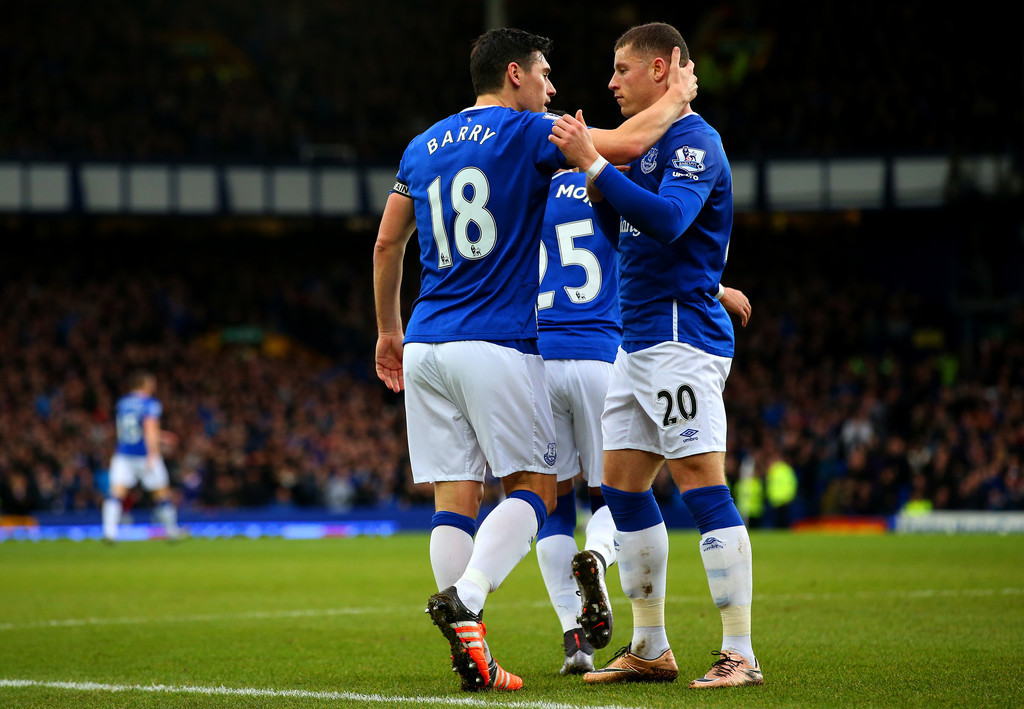 I’d love to suggest it doesn’t get any lower than this but this is Everton 2016 and the unknown depths we stare into can look bottomless. Koeman, a face akin to being stung by angry bees on the Gravitron, has more questions than answers in an X-Files episode we can’t escape from. The ferocity of speculation that spreads out into the Universe at the speed of Light this week mostly covers Trump and his gloating minions, another unwanted International break, heavy unusual petting of Memphis Depay and the search for new players, no new solutions, ever increasing circles of doubt and sound bites from our Boss apparently mis construed. The simple fact is that last season we done Chelski while they were down and this season they’ve come back in spades. What does it show us? What we have known for a while. It’s not far fetched to want to see a contest, and even after City where we were on the ropes from the kick off you still thought we could nick it right at the end. Is it right to say we have gone backwards? Have we gone all the way back to the horrifying early 2000’s without troubling the local trophy Engravers in all that time? Are we still treading water at the deep end of the pool while the bullies take turns in giving us Atomic Wedgies and making us sniff their armpits with brief respites when the wave-pool sirens go off? Where’s our bite? Where’s the pack hunting mentality? Lost in the swirl of new money? The fragility in relying on a couple of players was never our strength and never really has been. Looking back we’ve had the occasional star yet talent in depth and attitude in technicality has always been the backbone to the club. While the other half providing a festering haemorrhoid out the backside of L4 we’ve always provided the respectable antidote to such Bellwhiffery.

The Sydney Harbour Bridge has a team of painters who start at one end and by the time they get to the other side it needs repainting again. Are we a team constantly repainting or have we never had the modern blueprints to build on anything bar sand? Which with players at each end of the career spectrum it need not constantly be a ‘from the ground up’ philosophy but saying that, what have this team ever actually achieved? If underachievement had a trophy we’d probably still be outside the top four. Parts greater than any sum at the moment, even though it’s difficult not to want to punch something after last week. All you can take from it is that we are nowhere near mentally ready to match some sides and that Mourinho has become somewhat of a stranger to the game. Oh and Gana. What a pivotal player he has become. I was little concerned at the start of the season when early changes were being made, slightly wrong teams were being put out and having early course corrections. Three at the back should be consigned to the scrap heap for now and trying mirroring a team like Chelsea in that mood. 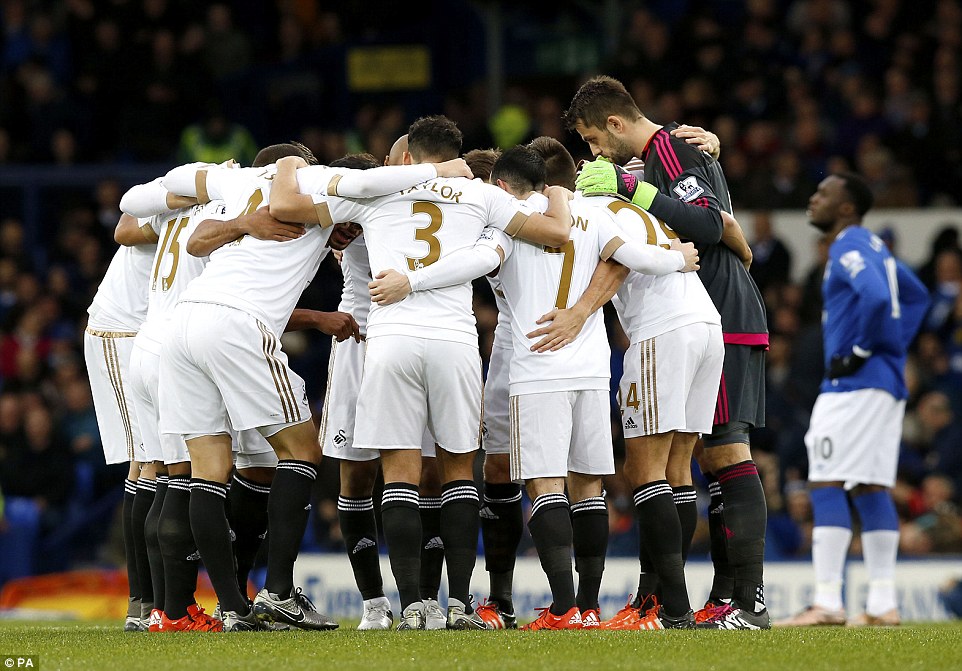 So, with our last Saturday Night Special blowing our fingers off, we take two hardentheffups, reload and host Swansea City Football Club for the short trip across the boundaries of the Wool Map. What do we know about them? Hold onto your hat while I fire up the internet and teach you a thing or two about the Welsh Real Madrid. They don’t have a 3rd kit which in this day and age is quite the feat. Liberty Stadium was named in honour of Grand Theft Auto 4 which was based on the streets of Swansea and Chairman Huw Jenkins made his name and fortune as the insanely annoying Boss in the Brittas Empire and as Prince George in Blackadder Series 3. Thank you Google. The Swans team are apparently in disarray. Bob Bradley is next through the revolving door as Head Coach, the last time I looked I remember it being Guidolin and it has to be the first American Soccer Head Coach hired in the PL. On paper the Swansea Cosmos have a fairly decent looking side for any pro Fifa Ultimate Team and names like Fabianski, Routledge, Fer, Ki Seung, Dyer, Cork, Taylor and Llorente have a solid pedigree to draw up a competitive first team. But results are eluding them this year it seems as they have only 5 points and sit second bottom. Good grief. We *should* spank these. 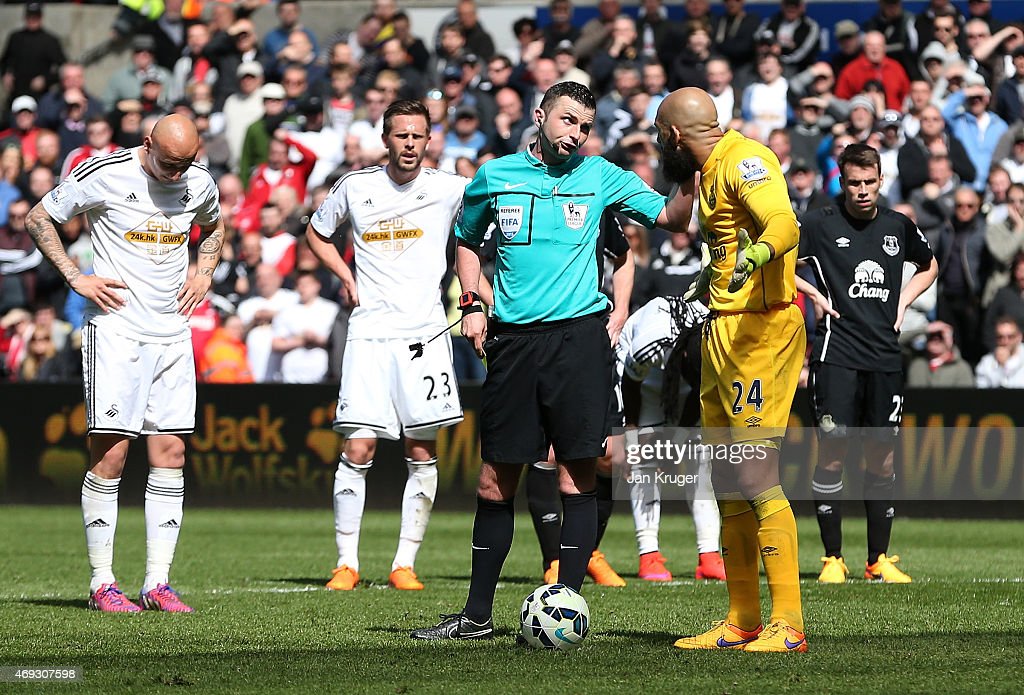 And with that in depth analysis reminiscent of the beloved Bong, what is our bloated Lee Majors, our Six Million Dollar (pound) Man to do? He could have Huffed, and Puffed, and blown a few houses down but after the latest humiliation he will point to the map of America and tell the team what truly screwed is. We are still in a good place in the league. It’s not a bad place. It’s ain’t phenomenal, but it ain’t bad. It’s where we probably deserve to be. Keep on plugging away. Do as I say, and not as i do, just blame it on the boogie and get back on the dance floor.

In goal could go either way. Joel or Stek both seem to have a lot of the same ingredients and are going to produce similar performances. Selection wise I’d suggest a quiz, failing that a bake-off and failing that see who can hold their hands in an esky full of ice the longest. The backline for this momentous occasion stays the same, unless Baines is fit again although according to some he may just be booked into Shady Acres Retirement home for Left Backs sooner rather than later. Seamus, Jags and Williams need to return to the basics and try to keep the onion out the old onion bag after a serious blowout. Williams will also see the return of his former side. Midfield should see Cleverly expunged from the record and Gueye returning to partner Barry. If ever something has flattered to deceive it’s name would be Tom Cleverly. He’s the equivalent of a talented shadow looking magnificent in the moonlight but in the cold hard light of day about as much use as a fork in sugar bowl. I could write essays of things more useful than Tom Cleverly but I don’t have another lifetime to waste or the will to give away too much good material before the seasons over.

Ross Barkley should continue on the thrust of this solid midfield base and will hopefully see some more of the ball and do naughty things with the curl of his lip and swivel of his hip. Did we see him out partying this week? Go get them Parties Heartily. On the wings will see Bolasie as the only certain wide man starter. Its the kind of game he could play a big part in so there’s no doubt he’ll be busting sweet rhymes fam to get back out there. Do we continue with Mirallas or do we dust off Deulofeu and give him 65 minutes? Whatever the combination the end game is getting Lukaku running at the defence with an inch of space and 9 times out of 10 he’ll do the rest. You’d think Del would be picking himself with the skill in his locker but maybe he hasn’t been 100%. Maybe Koeman is yet to trust certain players and any further failures and he might set out the right combination. Your Lennons and your benchies should be nearing the first team frame after such a wipeout but it will be finer minds than mine to be responsible for dissecting such things. 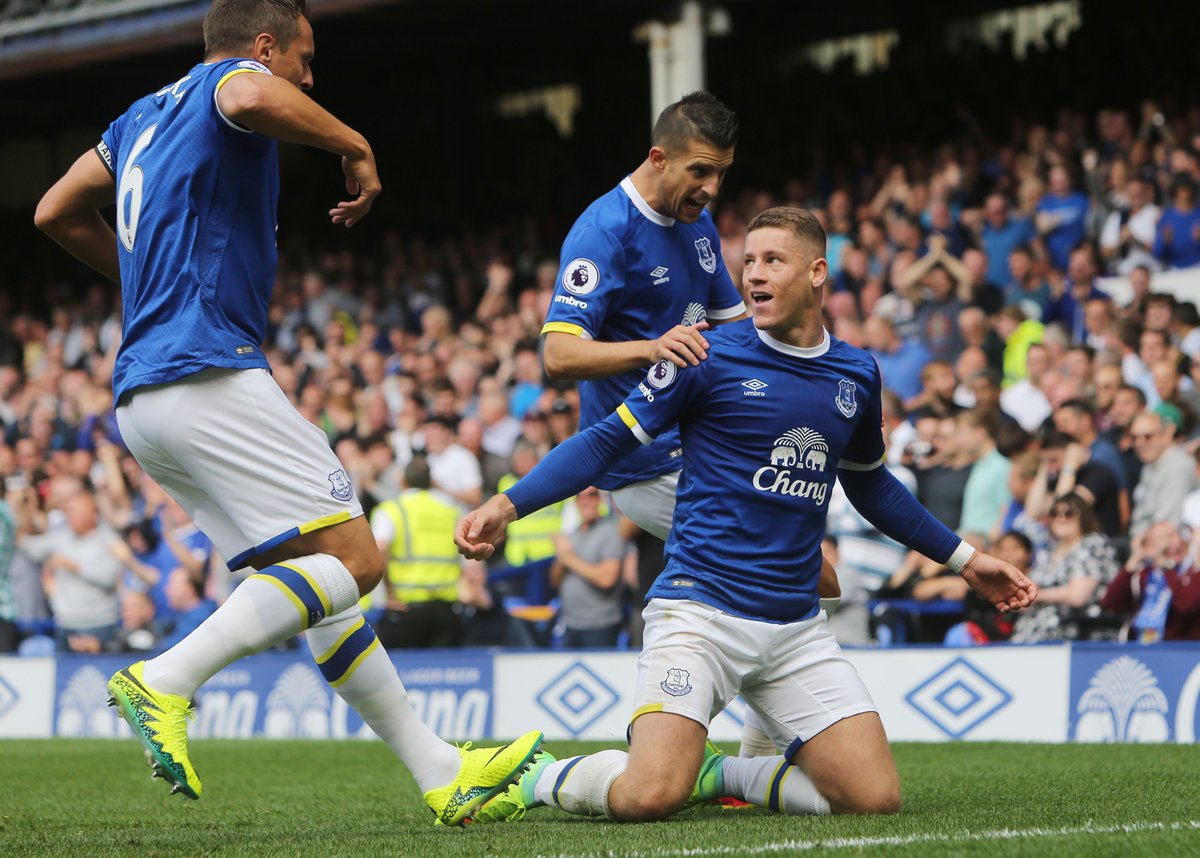 I’ll sit and I’ll watch and I’ll cheer and I’ll fume and I’ll shed a little tear for the one of our own we called Gaz, and hope the day will bring a brighter one than the one before it. Just make sure to leave it all out there on the pitch, Everton.

It’s all we can ask in this short life.