I don’t know Steve personally but I’ve seen him at plenty of away games over the years, and as Joe Royle says in his foreword, Steve has “more than just a fanatical support for his club; it is a marvellous obsession”. 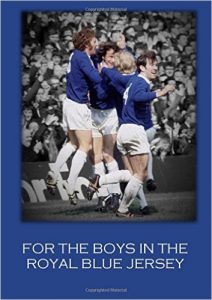 In Steve’s own words, he’s a fan not a journalist and that’s the charm of the book. I’m probably of a similar age so with the exception of a few of his interviewees I can recall seeing them play in the Royal Blue of Everton.

The book is a collection of 50 interviews, arranged in alphabetical order. 49 are players, the other is a memorable interview with the daughter of Alan Ball, Steve’s hero. It’s a wonderful interview as it not only give information on Alan and football but an insight into his family life and perhaps most meaningfully the relationship between Bally, Everton and of course, us the fans – very enjoyable read.

It’s a book to pick your way through, for me I enjoyed going from one player to another based on my own preferences, I don’t think many will start with Alan Ainscow and read through in alphabetic order to George Wood.

There’s lots in the book I  wasn’t aware of, personal insights from players, little nuggets of information that have come out in conversation. One thing that struck me is Steve’s knowledge of our club and the players themselves – forgive me for using the word but it’s phenomenal.

I’m not going to do any spoilers, other than mention my particular favourite stories featured the players in the mid/late 60’s playing under Harry Catterick.

Having said that this book is a great read for all ages, you don’t need to be in your 50’s or older to enjoy it. If you love Everton, and our history you’ll love the stories, and be in awe of Steve’s dedication.

The book is a must for Evertonians hungry to learn more of the greats (and some of the not so greats) who have pulled on the royal blue jersey. Even better that part of the proceeds of the book go direct to the Former Players’ Foundation.

I’ll leave you with 2 quotes from the book

Many thanks to Steve, I hope you enjoy the book as much as I did!

You can buy the book from Amazon here.