FAN VIEW: The Next Ten Games

There are thirty points to play for before the January transfer window opens. 30 season defining points over 10 league games. So while we’re hurting from last weekend there is no point in wishing the time away until January 1st. Yes the defeat to Burnley last weekend was disappointing but realistically we shouldn’t have been surprised. In the run up to the trip to Turf Moor we had failed to score from play more often than not. The list of games in which we drew blanks includes some pretty average teams (Bournemouth, Palace, Stoke, Norwich) and Spurs. There was very little in preceding game (Manchester City) game either to suggest that our open play had improved enough to see off Burnley. As an attacking unit we’re just not at the races.

There are many positives to be taken from the new Everton-era. We have billionaire majority shareholder intent on securing a modern new stadium. A heart-warming £200k donation by the club to the Bradley Lowrey cancer treatment fund at Sunderland showed that, while new money has arrived, old Everton values still hold true. A manager of international standing has been secured with support from a director of football poached from the league champions. And we have Idrissa Gueye. What’s needed now is a game plan to ensure that the on field activities over the next ten games don’t derail our season before re-enforcements arrive in January.

The squad has not changed hugely since last season. Other than the addition of a winger (Bolaise) Koeman is essentially making do with the previous manager’s offensive players (no I didn’t forget Valencia). To Koeman’s credit his points return is greater over the corresponding fixtures last season (table 1). In Formula 1 terms he has posted a faster lap in a car set up for another driver. 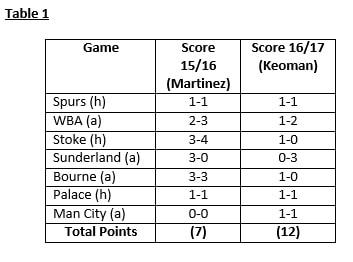 As a team we’re fitter, we press better and we’re more resilient than we have been since Moyes. The defensive purchases have all worked out. In Maarten Stekelenburg we have a goalkeeper who wins us points (Spurs, Man City) – words not uttered since Nigel Martyn retired. Idrissa Gueye is an early contender for player of the season and Ashley Williams looks a solid organiser. If a kink remains in the defensive fabric it is an inability to defend high balls into the box. Of the eight league goals conceded this season four have come from headers (Lamela, McAuley, Benteke and Nolito) and a fifth from a Stekelenburg OG from a cross. Opposing teams play on this weakness. Palace turned up at Goodison with a game plan to create a mismatch at the back post between Benteke (6’3”) and either of our full backs Coleman (5’8”) or Oviedo (5’6”). It worked and they left with a point. The case for recalling Galloway (6’2”) from his current loan and the inclusion of Mason Holgate (6’3”) is clear. Only Spurs have a better defensive record in the league this season (4 conceded). Our rediscovered defensive solidity has however come at the cost of creativity. Shades of a puzzle half solved for Koeman. If we are going to maintain or improve our current league position we are going to need to be perfect defensively over the coming two months because we are just not turning dominance into goals and that is hurting us badly.

With ten games scheduled before the New Year what can be done? You don’t have to be a footballing Einstein (to quote Jose Mourinho) to suggest that a squad containing players with the pace of Bolaise, Lukaku, Deulofeu and Lennon (remember him?) might be more productive set up as a counter attacking unit. Set up as a low press, compact unit looking to counter attack at every opportunity. Purist may not like this approach but it would be a temporary fix until new recruits arrive in January. Think of it as driving on the space saver until you can get to the tyre shop. It is also a simpler game plan to execute and may also address a recurring niggle about us putting together a full performance over 90 minutes. Ten games over sixty-two days, a tricky run that includes Chelsea, Arsenal, Liverpool, United and champions Leicester. And of course by far the most emotive of those games is the trip to Anfield. Counter intelligence on their one defeat this season reveals that they struggled badly against a team that employed a low press compact zonal defence as proposed here (against Burnley co-incidentally). Picture the scene. We’re defending deep, holding our shape, inviting them on. Gueye sticks a leg in and the balls breaks to Barry who immediately sweeps it into the space behind. Lukaku is onto it and does what he does best, running into the space, striking terror, belting it into the back of the net. An entire shiny new stand falls silent. Really, it’s high time we added to the memory of Kevin Campbell’s winner back when we were all worrying about the millennium bug.

Sixty two points was the cut off for European football last season. At that rate a return of 16 points would be needed over the coming ten games to stay on track at the halfway stage. Game 1 of 10 starts with a home game against West Ham on Sunday. We owe them one from the corresponding fixture last year when we lost all 3 points due to (surprise) an inability to defend high balls launched into our box. We’ve been warned. Let’s get the three points in the bag on Sunday and keep our season on track. Over to you Ronald.