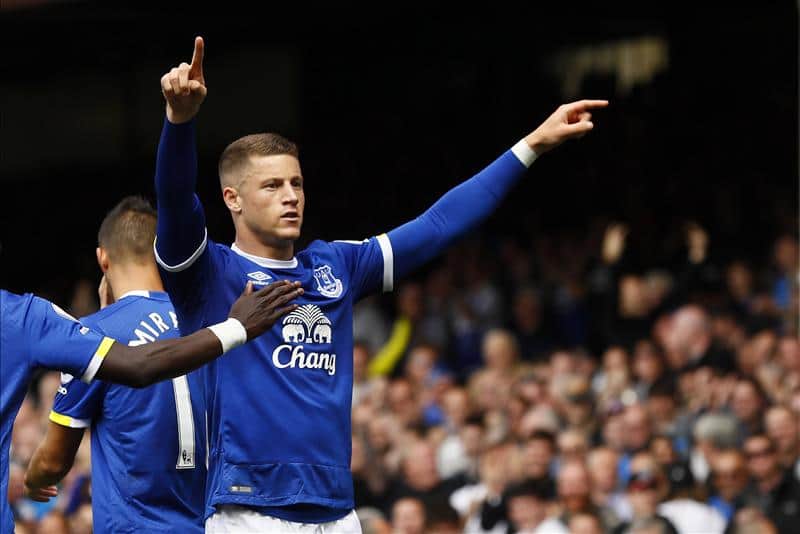 The Ronald Koeman era begins with a draw after Lamela cancels out Barkley’s early opener.

A Game of Two Halves

Opening day of the new season, the sun shining, Goodison sold out and a good, not rampant, degree of expectation amongst the home fans as Ronald Koeman truly entered the fray as Everton manager.

Given the absence of Seamus Coleman and Romelu Lukaku through injury and new signing Ashley Williams not yet game fit, some inside Goodison might have taken a draw from the outset against a strong and capable Spurs outfit.

Everton got off to the perfect start as a free kick some thirty yards out on the left flank was curled deliciously by Ross toward the six-yard box where Jags failed to make contact, but the ball had enough on it and the bounce took it beyond the despairing Lloris for the season opener.

Goodison was exultant and expectant and the opening exchanges saw Gueye, Barry and McCarthy all eager into the tackle, Deulofeu and Mirallas interchanging left to right and Ross looking to drive forward.

Spurs tried to hit back and Jags made a fine diving block on an Eriksen shot, before Gerard cut in from the left only for Lloris to deal comfortably with a weak shot. James McCarthy was playing with much more intent as the manager urged him to press forward when in possession as well as pressing into the tackle.

Everton could have doubled their lead on the quarter hour as Ross sent another free kick into the box and Lloris turned a Jagielka header over the bar. Baines sent in a nice left wing cross only for Ross to mistime his header and the next Everton raid saw Holgate set Geri away in space and his through ball for Mirallas saw the Belgian denied at the near post by Lloris.

Everton seemed very comfortable and Maarten Stekelenburg didn’t make his first notable contribution until the 26th minute easily saving from Eriksen. Michel Vorm replaced Hugo Lloris in the Spurs goal on 35 minutes, the Frenchman having taken a knock colliding with the post in his unsuccessful attempt to keep Ross’s opener out.

Vorm had to be alert and did well to deny Gerard Deulofeu after the mercurial Spaniard had pounced on a weak back pass from Rose, the goalie saving with his legs.

Half-time saw the Blues leave the field to a rousing round of applause after a dominant first period in which they could and probably should have taken a two- goal lead from.

Spurs didn’t wait too long into the second stanza before making changes to put pressure on the Everton defence and stop Barkley and Deulofeu enjoying quite so much of the ball in midfield… new signing Janssen replacing Dier and switching their formation to a more effective 4-4-2. The change almost reaped an instant reward as a Janssen cross from the right found Alli but he put his shot into the Park End stand.

The re-invigorated Spurs drew level just before the hour mark as they got the ball wide to Walker and an excellent cross saw Lame marginally quicker to the ball than Mason Holgate and his neat header found the bottom corner, giving Stekelenburg no chance.

The momentum of the game was turning Spurs way as the 70% fitness level Ronald Koeman has alluded too began to take its toll on the Blues. RK brought Arouna Kone on for the less effective Deulofeu and shortly afterwards Aaron Lennon replaced Mirallas.

Spurs though were now on top and pressing hard for a late winner, the Achilles Heel of Everton under Roberto Martinez. Walker drove a shot to the near post that Stekelenburg did well to turn away and from the resulting corner, the big goalie made a super reaction save to keep the scores level.

Arguably the best save of the game came when a Lamela shot took a deflection and Stekelenburg did superbly well to adjust and tip the shot over with the help of the crossbar.

Koeman withdrew Gareth Barry on 84 minutes in favour of Tom Cleverley and the fresher, younger legs did enough to see the remaining time run down for a 1-1 draw.

Everton had bossed the first half with a display of energy and freedom up front in the absence of a genuine target man. Gueye showed he likes a tackle and has the energy to perfectly compliment the experience of Barry in the midfield; McCarthy looked to taken on board a weeks’ cajoling from the manager about being more positive in possession and the back four had looked quite solid. Mirallas looked more like the Mirallas we first signed while Deulofeu must be a nightmare for defenders with his pace and trickery, that sometimes fools himself.

Spurs must have had something of a verbal rocket at half-time as they looked a different proposition after the break, especially when Janssen came on and the Everton back line was given a lot more to think about.

As fitness improves, and when Ashley Williams is available, the tiredness that led to defensive breakdowns will hopefully disappear leaving a much more solid look to the defence. Offensively without Lukaku, Everton did look a little blunt, particularly second half when Vorm was barely troubled and was largely a spectator.

With more new signings rumoured and hopefully on their way, the opening day signs were largely encouraging. Ronald Koeman won’t be fooled though, he knows there is still a lot of work to do to get Everton competing at a level the crowd expect… so a Juan Mata type in midfield and another quality striker would appear to be the most pressing needs.