IN SOME circles Roberto Martinez has become known as Baghdad Bob.

That was the name the Americans gave to the Iraqi Information Minister when they were invading Baghdad.

Remember him? Little guy with a cap who used to say more and more preposterous things as the war went on. We called him Comical Ali.

He was relentlessly positive, even in the face of crushing defeat. He would tell you how the brave Iraqi forces were repulsing the cowardly invader even when they were in full retreat.

Martinez is relentlessly positive too. He’ll tell you his players have put on a brave, outstanding performance even when they’ve just blown a two-goal lead to lose 3-2 at home. 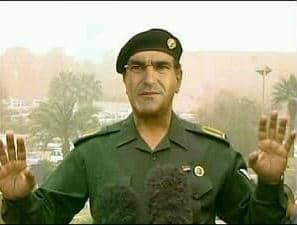 He’s so positive so often that the next time he calls one of his players world class, it’s a fair bet few will listen. In the same way, his excuses are starting to get ignored too.

He chose to explain Everton’s defeat to West Ham by blaming the referee for the soft red card he dished out to Kevin Mirallas.

Instead, many Everton fans quickly piled in to blame the manager, who made a series of substitutions that have been heavily criticised since.

So who was right? Feel free to make up your own mind. But here are some observations after watching it back.

Firstly, the switch to 3-4-3. Maybe Martinez saw how West Ham switching to three at the back stopped Tottenham playing last week by nullifying their full backs, and decided to match up. It’s also possible he fancied having a third centre back as insurance with Barry and Besic not fit to start.

Whatever the thinking, it ended up being a very attacking line-up, with two out-and-out wingers playing narrow, like old-style inside forwards, and wing backs encouraged to overlap. In his defence, it worked too.

To begin with, Everton are well on top, have scored, hit the post and drawn two good saves from Adrian, while Joel Robles has not had one to make.

Then Kevin Mirallas gets sent off. His first booking may have been harsh. There have been worse dives this weekend, some in an attempt to win penalties, that went unpunished. But having been booked, Mirallas was foolish in the extreme to make the tackle which got him sent off. He let his team-mates down. And not for the first time.

But here’s where it gets interesting. To see out the half, Martinez goes to 4-4-1, John Stones moving to right back, with Seamus Coleman in front of him, and Aaron Lennon moving to the left wing.

West Ham almost score immediately, down Everton’s right flank. They survive until half time. But having seen how bad Stones was at right back against Manchester City, it’s no surprise he’s the man brought off at the break, with Mo Besic coming on.

Logically it’s the right call. But instead of slotting Besic into central midfield, his natural position, Martinez plays him on the right. Presumably, he is worried about the threat from Dimitri Payet and wants Besic there as cover. It feels unnecessary, but to start with it works, and keeping Lennon on the left to accommodate it helps create the second goal.

But despite being 2-0 up with just ten men, he lets them carry on going forward when many would shut up shop. This is risky. But again, to begin with it pays dividends when Everton win a penalty. Unfortunately, Adrian makes the save. At this point, a more pragmatic manager would be thinking about protecting a two-goal lead. Not Martinez. Still Everton go forward, opening the game up and testing their legs. They start to tire.

Realising, he makes another sub. An odd one on the face of it. Niasse for Lennon. Now, Lennon had done a lot of running, and was clearly tiring. But instead of bringing a more defensive player on, he chooses to replace him with one who can chase and harry up front. Niasse does just that and quickly wins a free kick deep in enemy territory by chasing a long ball, relieving the pressure. But may would have put Gareth Barry on at this point to close the game down.

Two minutes later West Ham score, from a set piece. James McCarthy heads the first ball clear at the near post, but he and Lukaku (whose legs look gone) can’t get out quick enough to stop the follow-up, which is headed in. It’s Coleman’s wing, but he Michail Antonio, who he is marking, has dragged him to the other side of the box. Clever. But if Everton had had 11 men on the pitch, the extra defender probably means it doesn’t go down like that.

From this point on they start to look ragged. They’re not stopping crosses at all, and quickly let in an equaliser with both Barkley & Oviedo failing to get near the delivery. Having played with a man down for so long, it’s no surprise they’re now struggling to close people down.

Still, it’s 2-2 and a point is better than nothing right? Apparently not for Martinez. You have to admire his optimism in continuing to chase the game, and again it almost pays off when the referee misses a West Ham handball. But opening the game up at this point, with his players clearly struggling for energy, feels suicidal.

He finally does send Barry on, for Lukaku. But West Ham score almost immediately from another cross they can’t stop, and with hindsight that sub came far too late.

So, his last two subs can be questioned certainly. The timing of the last one especially. But the two biggest reasons why they lose are because a) they’re knackered after playing with ten for so long, and b) he still has them going forward when he could (twice) have chosen to settle – at 2-0 up and at 2-2. Being so positive very nearly worked, but ended up being costly.