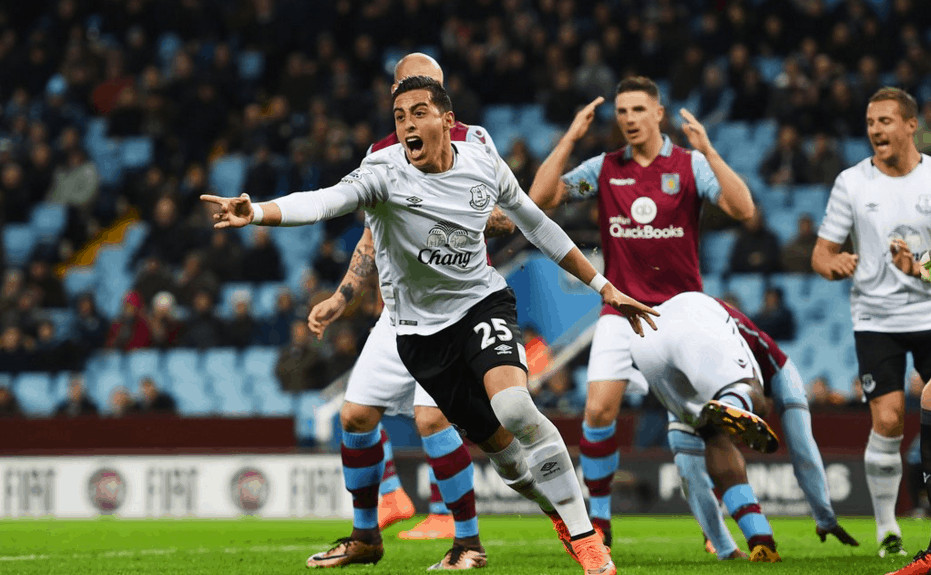 Mori, Lennon and Lukaku with the goals in a comfortable 3-1 victory at Villa Park.

Don’t ya wish ya owner was Mo-Sho-ri…

After the euphoria of the news at the weekend it was time to get back to the bread and butter and a return from ‘a warm weather training’ camp in Dubai saw the blues travel to Aston Villa.

Everton lined up with a strong looking 4-2-3-1 against an Aston Villa side 8 points from safety at the start of the night. With a plethora of empty seats in the ground Everton took an early lead through Funes Mori with a free header in the 5the minute. The goal highlighted everything that has been wrong with Villa this season with a lack of organisation, no ownership and lot of hands on hips. 1-0 the blues.

A beautiful flowing move from back to front involving Barkley, Mirallas and Lennon led to a goal which was probably slightly against the run of play the time. Lennon finishing off the slick move that illustrated perfectly the toffees strength away from home playing counter attacking football. Goal scored in the 30th minute with the blues still not really getting into gear as yet.

For a team bottom of the league and 2-0 down at home Villa showed some fight with Cissokho bombing down their left and swinging in a nice cross with only blue shirts in the box it was dealt with. Another corner from Villa also put the blues defence under some pressure but Lescotts cross come shot drifted past the post and out of danger.

Half time 0-2 to the toffeemen.

The 2nd half started as quite a cagey affair. A few poor passes from the home side that went straight out of play stirred the sparse crowd into frustrating grumbles.

The 58th minute saw a lovely ball from Lennon met by a powerful header from Lukaku which led to a very good save from Guzan. The resulting corner was not cleared properly and enabled Lennon to feed Funes Mori in the area who picked out Lukaku who finished from close range. The Villa defence all at sea once more with plenty of bodies in the 6 yard box but none of them even remotely switched onto where Lukaku was. 3-0.

The 3rd goal seemed to fully awaken Villa and they started to play with pace and freedom. The hosts came close on two separate occasions via Westwood who firstly had a shot blocked by Jagielka and then shortly after putting it wide when he had space and time to maybe do a tad better.

The fans either ironically or not also seemed spurred on after the 3rd goal and burst into renditions of Villa till I die and other such vocal pieces.

John Stones coming on for Coleman saw the blues go to a 3 at the back which seemed to unsettle the side slightly. Villa introduced Gestede which proved to be a shrewd move as a ball into the box saw Gestede get between Jagielka and Stones to put a powerful header past Robles to make it 3-1.

A volley from Mirallas assisted by Lukaku was well blocked around the 86th minute while at the other end Gestede proved to be a nuisance again as he won the ball in the air once more to head down for Jordan Ayew to shoot which was well saved by Robles.

In the last minute of added time the blues won a corner which wasn’t dealt with and resulted in Funes Mori having a point blank shot saved by Guzan.

Overall not a vintage performance and one that Villa might find a touch refreshing that they didn’t totally capitulate. Everton didn’t really feel like they got out of 2nd gear and maybe lowered themselves slightly to the standard of the opposition but in the end was a comfortable victory/

Man of the match for me by far Aaron Lennon.