It feels like an eternity since Everton lifted a trophy. However, one team of Toffees this season has lifted three.

Everton Uganda was set up by Senkunda Ali to provide football and education to children from slum areas of Kampala, the nation’s capital. And this group of over 150 boys have been crowned the National Champions at Under 11s, under 13s and Under 15s level. They also have a number of girls teams, with around 70 girls turning up to play.

My girlfriend and I have been travelling through Uganda for the last three weeks and a while back I was browsing the Internet in a cafe in Jinja, a peaceful town near the source of the Nile, when I saw an interesting story. I don’t know about you, but I have a general routine when online that sees me check my email, Facebook, and then stage three is a Google news search on Everton to see what’s going on. On this particular day I read a story saying that Everton FC had donated match worn shirts to a team of underprivileged children in Kampala, Uganda’s hustling and bustling capital. We had literally just been there. I had to find out more and was desperate to go along and watch them train or, if possible, have a kick about.

I found the team online, got in touch, and was pleased to know that they were overjoyed at me even asking. Uganda, for those of you who haven’t been, is a country where most people I have met have been truly kind, warm and eager to hang out. A few weeks ago I was watching the United v Liverpool game in this dark bar. The lights were low, there were plastic garden chairs everywhere all pointing at the screen as a very boring (it was United after all) game unfolded. Not one chair was empty. Part of the way through the game I got chatting to a local guy called Joseph about football. He played every now and then, so I gave him my number to give me a call if he had a game coming up and needed another person. The next day I got a call inviting my girlfriend and me to his mother’s for a barbecue. That’s just the sort of people you meet again and again here.

I was so glad that I was welcome at Everton Uganda and couldn’t wait to have a kick about with the kids and meet the coaches who had set up the program. I awoke excited, as if it was the morning of a huge game. Also, I was glad to see that the day was slightly overcast. Having not played for four months, the prospect of running around in the blistering sub-Saharan sunshine was one I was slightly fearful of. My joy was premature, however, as by the time we arrived at the pitch, the sun was beaming down and I was already sweating. Ali and Yawumah, another of the important men behind Everton Uganda, greeted me warmly. Ali, who is from an underprivileged background, works tirelessly ensuring that Everton Uganda offer both boys and girls health awareness, whilst developing their sporting talent. They engage young people in sport to help build confidence and self esteem whilst teaching them the value of team work and fair play.

After an initial greeting, Ali walked me over to the kids who were split into their age groups and in the middle of a keep ball drill. Their touch was incredible. Especially when you consider the surface they were playing on. The pitch was compacted sand and dirt. Very dry and dusty, it sloped up a bank on one side and dropped down a fair few metres on the other, and certain parts of the pitch were as bobbly as you could imagine. There were sporadic bits of grass in one corner but that was about it. There was also a cow tied up behind one of the goals. And, despite this, these kids had an immaculate ball control. 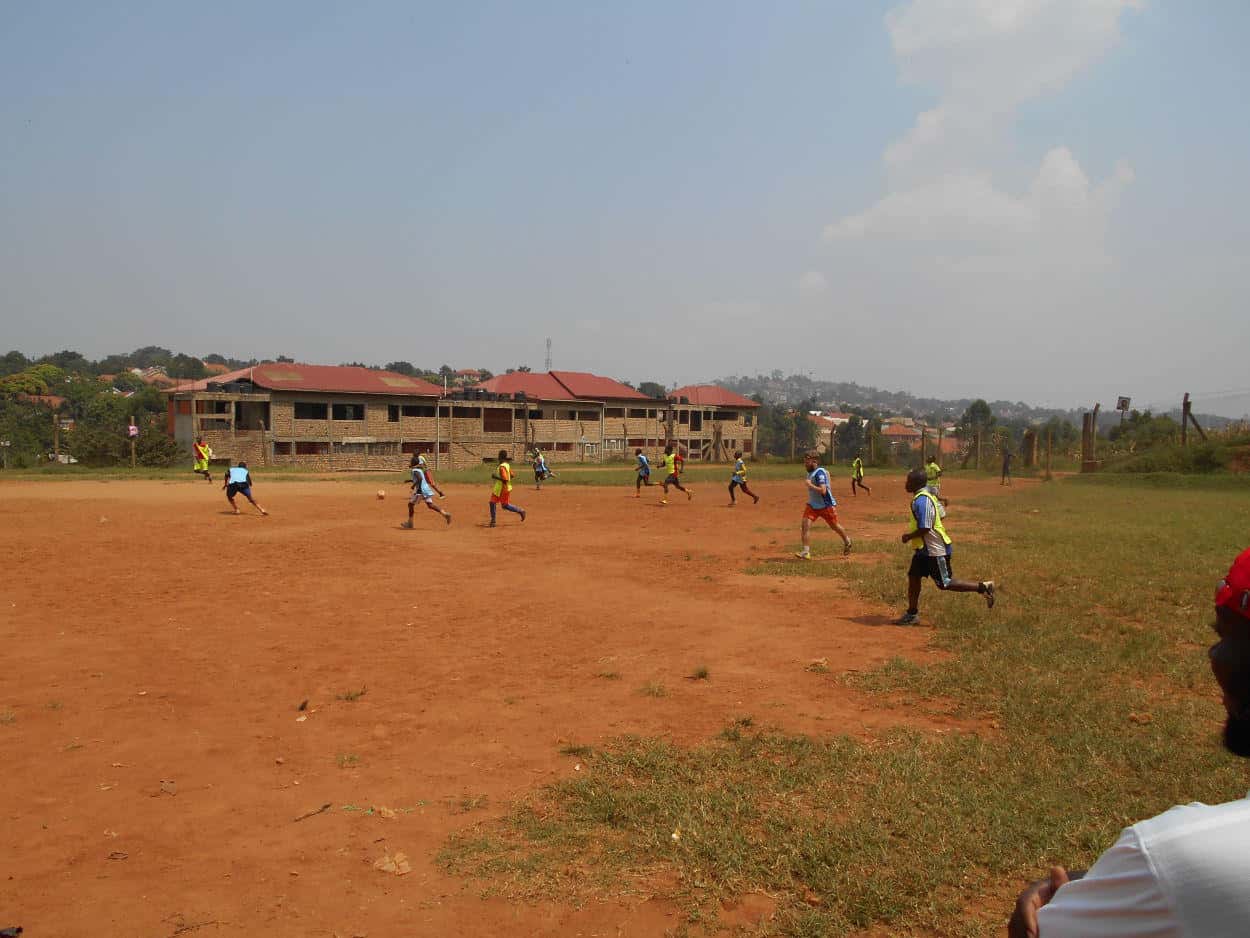 After a general introduction, we were set up into two teams, bibs were a handed out, and a full size match was underway. I had to think about every touch in order to not lose possession, keeping an eye on the bobbles on the ground. But the kids were so confident, clearly used to the conditions, and played with a swagger that was mesmerising. I have played a lot of football in my time, and these kids were as good as any I have seen. Small lads from the under 11s were playing intricate passing football with their older teammates, and everyone seemed to have confidence in each other’s abilities. We played mostly two-touch football throughout.

Not only were these kids clearly very talented footballers, but they were also fit. Very fit in fact. I on the other hand, enjoyed a very productive first 20 minutes, before being reduced to a sweating, panting, wreck. As the first half drew to a close I was elated. Especially as we were 1-0 up. I hit a cross-field pass to a tiny kid called Joseph, who was only 11 years old but rapid quick. He took one touch to control the ball, another to push it past a kid twice his size, and a third to slot the ball home between the makeshift wooden goalposts. 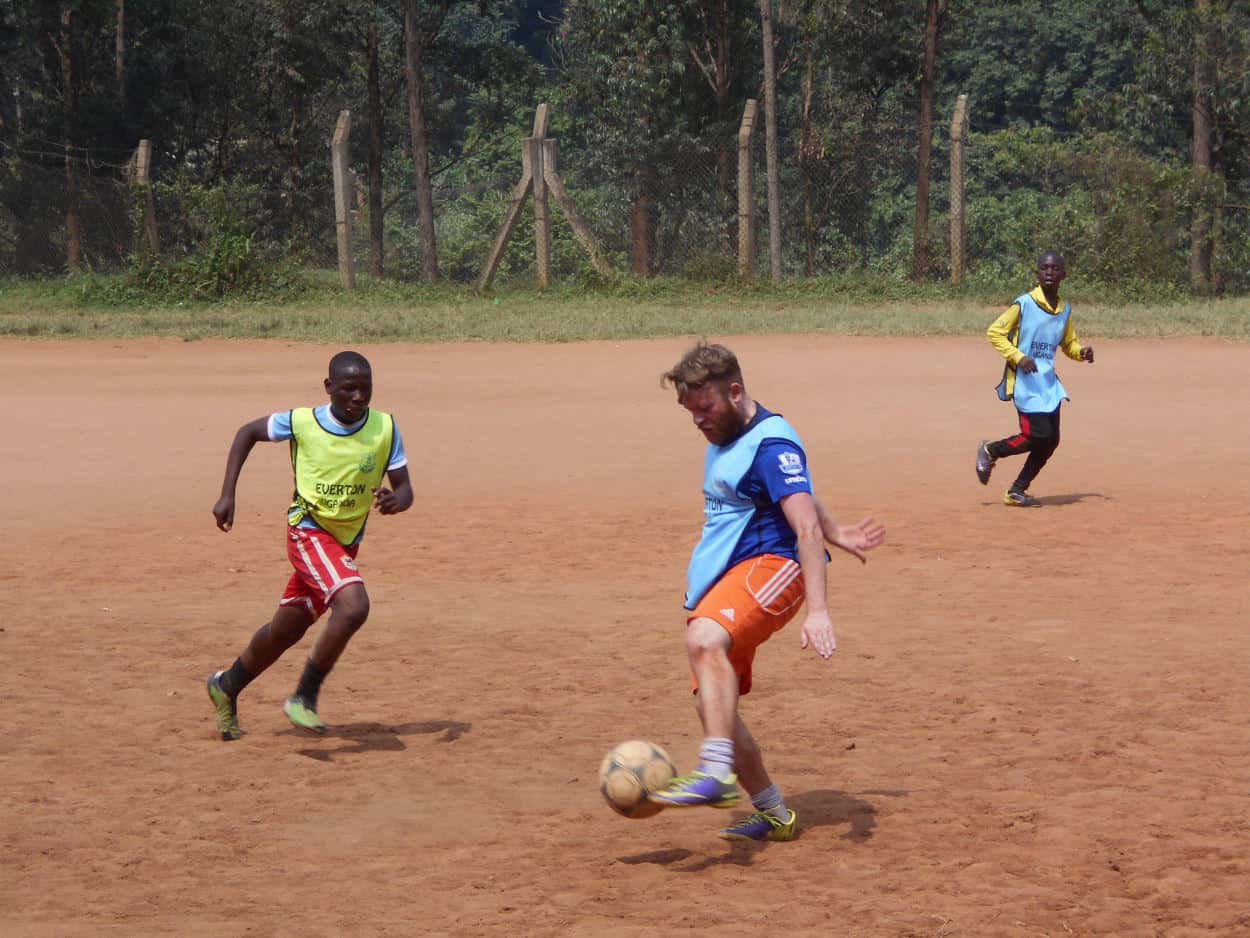 Half time was quick, but I still had time to put on another layer of sun cream and drink another litre of water…

I was pretty much a passenger in the second half watching the kids play around me with ease. Little Joseph managed to bag a second goal for our team (the blue bibs) and a few goals later we were 3-2 up. But it wouldn’t be Everton without some a controversial refereeing decision to talk about. With seconds remaining on the clock, our goalkeeper picked up a back pass and the referee awarded an in-direct free kick inside the area (not that there was an area marked out) about 7 yards from the goal. Our team made a wall on the line to try and block the attempt at goal. The yellow bibs opted to blast the ball at the goal directly, hoping it would take a deflection on the way in, an option I am surprised the professionals don’t go for more often. They blazed the ball at the goal, it went in and it may or may not have taken a deflection off one of our lads on the way in. But the referee said it hadn’t, the final whistle was blown and the game was over. 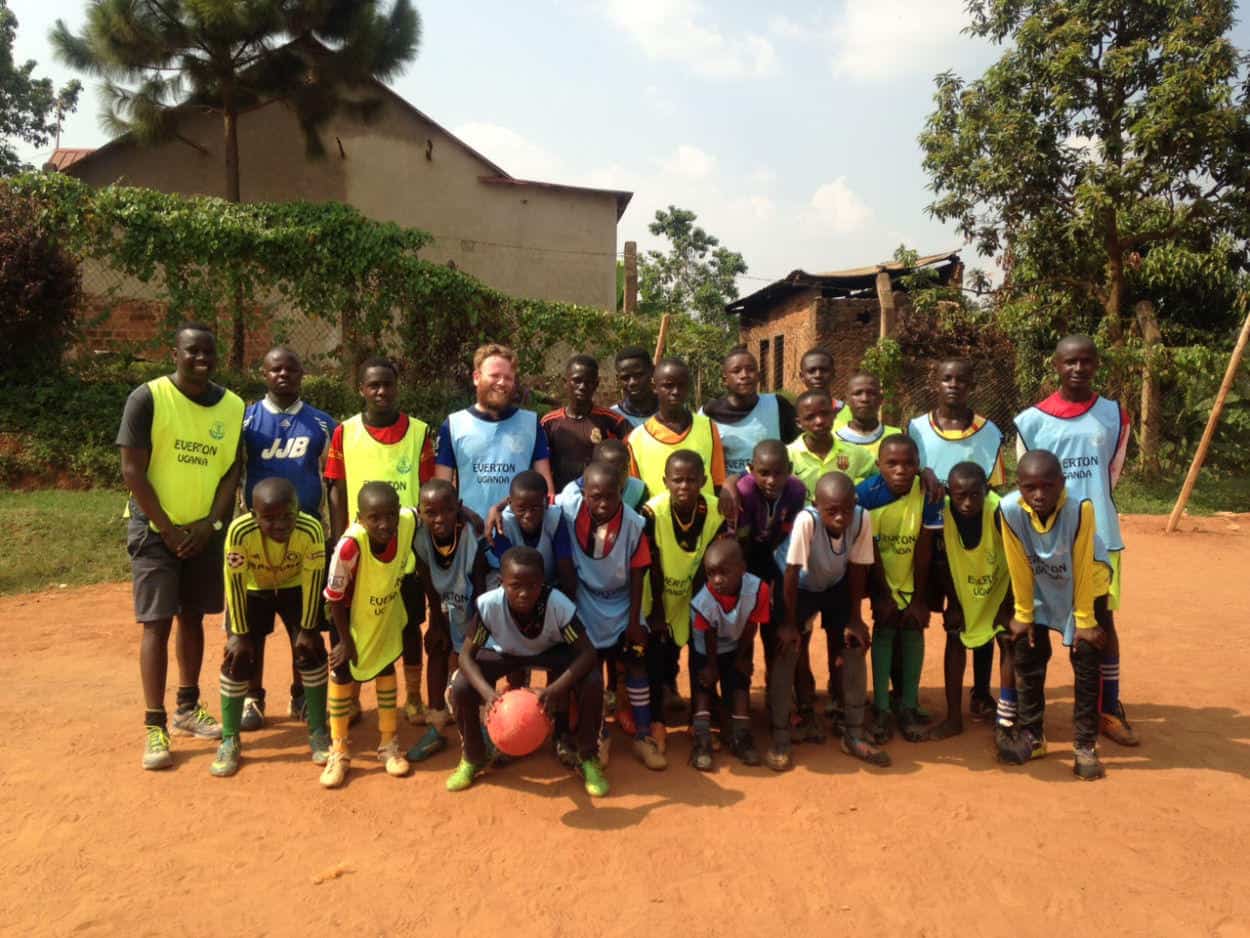 We had a gentle warm down, as if we hadn’t done enough running in the sweltering heat, and then took some photos. All the kids wanted their picture taken, and we also took some great team photos. These children and Everton Uganda itself, have very little. However, the kids and everyone else involved exuded a wonderful warmth and seemed so outwardly happy and optimistic that I couldn’t help being moved by the whole experience.

I was sad that I couldn’t stay for longer and wasn’t able to help more. It pained me to leave that day, knowing I may never go back, but I told them that I would do my best to let the fantastic and passionate Everton fans back home know about them. I wanted people to know about the hard work and dedication of Ali, a fellow Everton supporter, born and raised in Uganda, but still full of that classic Everton spirit. I wanted to ensure that the fellow Toffees I know and love would be able to be proud of Everton Uganda and all of the good that is doing for the lives of these children. I wanted the blues back home to know that in a country dominated by Manchester United and Arsenal fans, it was Everton Uganda that was lifting trophies this season. COYB! 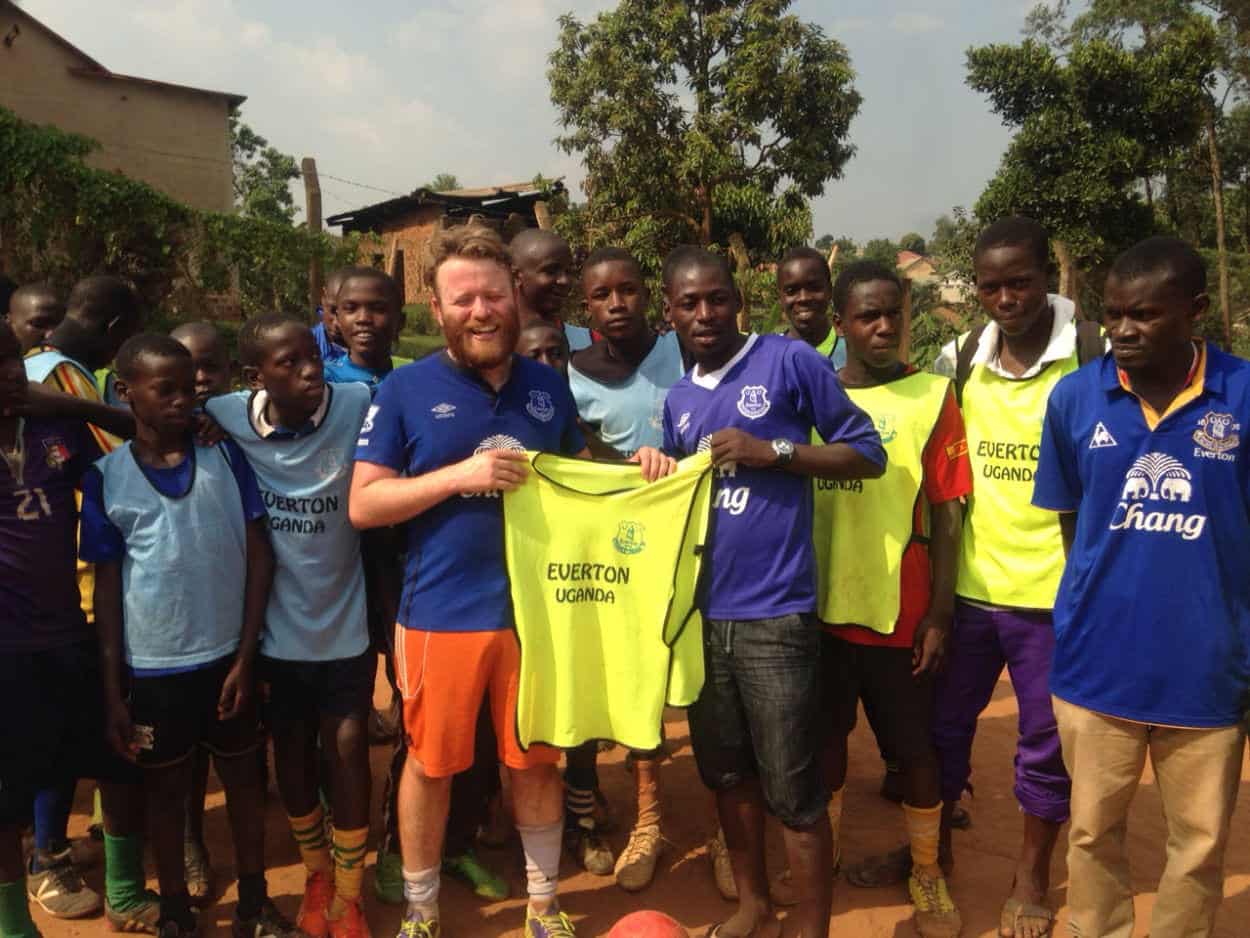 Side note: My Swedish friend Moses, who also came along to the game with me, was so inspired by what he saw that he set up a donation page with his partner to try and raise some much needed funds for Everton Uganda. I didn’t want to ask for money, however, if people were interested in donating to the cause, then the donation page can be found here https://www.youcaring.com/everton-kampala-uganda-514878.