Up For The Cup

By Andrew Quigley. Would you like to publish articles for GrandOldTeam? Give us a shout

Let’s not get too far ahead of ourselves, this is Everton after all.

FA Cup 5th round away at Bournemouth was not the best or worst draw and, after setting the ‘doing an Everton’ bar very high in the league fixture earlier in the season, it was a very winnable game as was proven to be the case. Not without it’s wobbles though. 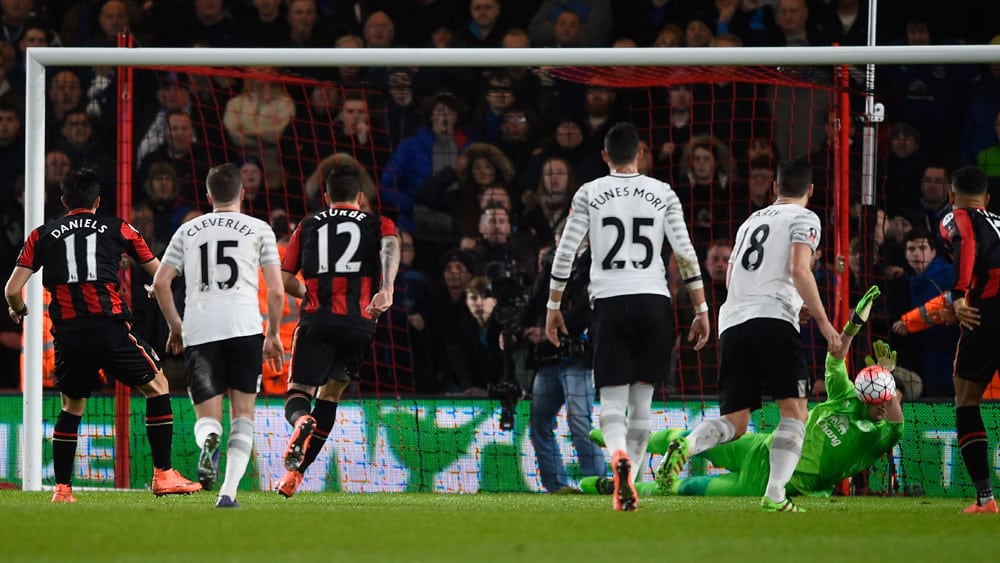 Of course, the main stand out incident was everything about Bournemouth’s penalty. A clear penalty kick as James McCarthy was caught out when doing his scarecrow impression, the ball striking him on the arm from a corner after having missed everyone between the corner taker and the guy McCarthy was marking. The resulting kick was saved by Robles and the rebound smashed into the travelling Evertonians – a real let-off. Naturally the first reaction of some was to say ‘told you so’ regarding playing Robles over Tim Howard. To be fair, it wasn’t a very good penalty. Nice height and not right inside the post. You would expect most keepers to have a chance of keeping that out if they dived the right way.

What has certainly been better about Everton with Robles in goal is how much more relaxed the players in front of him have been. Where Howard has been (at best) hesitant in situations, Robles has committed himself to attacking the ball. This makes the defender’s jobs a bit easier. They can drop back onto the line to cover the keeper or clear a path for him to catch/punch the ball. With Howard it seemed like he wasn’t sure what he was going to do so how could the defenders have any idea. Confidence in your goalkeeper makes a huge difference. Robles is not the best goalkeeper I have seen and he’s prone to flap but I hope Martinez is good to his word and plays him for the rest of the season. Confidence is a funny thing in sport. Maybe with a run of games, Robles will become more assured whereas previously he’d be in for a cup game and then out again regardless of performance. Interesting that Baines has been dropped recently too. Nobody should be a guaranteed starter but Martinez does have his core of players who will always play and I would have put Baines in that. Fair play though, Oviedo has done ok.

Something else that was good about the team defensively in this game was the kicking the ball out of play. I’m not taking the piss here. Where previously the lads at the back have tried to play their way out and made a mess of it, here there were no second thoughts about booting the ball down field or picking out row Z (row F in Bournemouth’s case) in order to stop immediate danger and to regroup. We all know Martinez’s ideals and philosophy but there is a time and a place. If it doubt, whack it out.

Despite these areas of defensive improvement, there was still a free header from inside the six yard box that Bournemouth should have scored as well as a couple of other chances which could, on another day, have been converted. However, it was good to see Everton grind out a win rather than the usual of conceding bad goals and not taking clear-cut chances. It is also good to see Ross Barkley shooting more. He’s scored a few deflected goals this season which owe a lot to luck of course but you have to have a shot in the first place. His contribution has been good this season but he still makes the wrong decision in a situation on too many occasions. Lukaku, despite scoring, was also quite disappointing but still managed to win the man of the match award from Martin Keown on BBC for reasons that were basically centred around having potential and playing well in other games.

Being drawn at home to Chelsea in the quarter final will hopefully make Goodison loud. Quite a few people on social media were saying that they’d rather play away because of how our form has been this season. A fair point but I think that the opposition and the stage of the competition will mean that Goodison is rocking.

Away from Everton, I thought that it was quite disgraceful that Manchester City put out their C-team. The magic of the cup is slowly being eroded as it is without teams basically waving the white flag. I understand that they are playing in the Champions League and this takes priority to them but what of all of this talk of winning the quadruple? You’d suspect what will happen now is that they’ll finish at best 3rd in the League, get knocked out in the next round of the Champions League and Liverpool will beat (nailed on) them in the League Cup Final this weekend and they’ll have won nothing.

It’s winnable for the Blues this season, let’s hope we give the competition the respect it deserves.