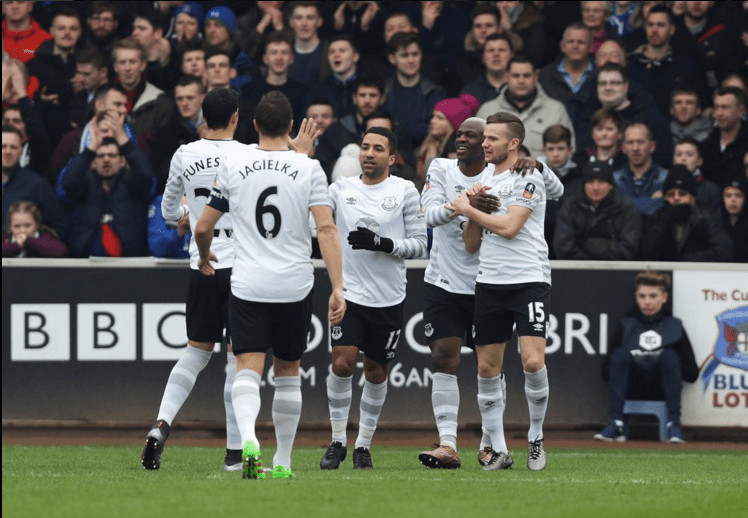 GrandOldTeam
Everton NewsMatch Reports
January 31, 2016
Koné (2′), Lennon (14′) and Barkley (65′) give Everton an assured win at Carlisle and put Everton into the draw for the FA Cup fifth round.Everton triumph in Lake District, written by Blockhead.

Consummate, comfortable and professional by Everton as they book their place in the last 16 of the FA Cup with victory over Carlisle United.

Before we get into the actually game, massive congratulations to all concerned with the city of Carlisle and the football club in getting life there back to a semblance of normality and getting Brunton Park ready for the visit of the Blues.

Sadly, BT continued to give that beanpole, badly-dressed, bankrupt ex-RS David James an earner, but at least there was a modicum of balance with “he’s fat, he’s round, still worth a million pounds” Peter Reid on the punditry side lines.

El Bob made some changes, arguably the most important being a rest for Romelu Lukaku, against the fourth tier Cumbrians obviously feeling we had more than enough firepower in the squad, but mostly because Rom is/was in danger of running himself ragged and with Newcastle on Wednesday far more deserving of his special talents.

Joel Robles kept the yellow shirt behind a back four of Seamus and Oviedo baby at fullback with Jags and RFM in the centre. Tom Cleverley and Jimmy Mac took the midfield role with Gaz Baz also getting a well- deserved rest with Ross playing off Kone, Aaron Lennon and Stevie P providing width and pace options.

A perfect start for the Blues saw them stroll into a two-nil lead inside 14 minutes courtesy of Arouna Kone and Aaron Lennon. It was the Ivorian who got the scoreboard moving after just 92 seconds as a nice ball over the top from Tom Cleverley released Lennon down the right wing channel and his unselfish cross to the back post saw Kone tap in at the back post for the opening goal.

The next flowing move almost saw the lead doubled before a Carlisle break saw a slip by Ramiro present (RS fan) Asamoah with a shooting chance that Joel dealt with confidently. The second goal wasn’t long in coming as another nice move saw Bryan play a neat one-two with Ross and his cross was sweetly controlled by Aaron before netting via the legs of the Carlisle goalie.

Two-nil up inside a quarter of an hour and in ridiculously comfortable control, Everton really could and should have put the game to bed well before half-time, but as on so many other occasions this season, we absolutely dominated the possession – 70/30 – without pressing the ‘killer instinct’ button in the quest for more goals and if the truth be told, the second half of the first period was something of a snoozefest with Jimmy Mac picking up a yellow card for a professional foul on QPR loanee Comley.

Hallam Hope came on for the second half against his former club, but it wasn’t to be either his nor Carlisles’ day as the Blues continued throughout the second half as they had the first. Kennedy was rightly booked for a poor challenge on Jimmy Mac and immediately, El Bob got Leon Osman warming up.

Everton were in total control and really should have stretched their lead and almost did when a mazy run by Ross saw his final touch a tad heavy before trying the shot. Ossie duly came on just past the hour mark with Stevie P making way.

At least the third goal came on 65 minutes and it was well worth the wait as Ross took a short pass from Ossie, took two more touches while he set his sights on firing into the top corner from 20 yards albeit with the aid of a slight deflection – game over.

El Bob sent Darron Gibson on for Ross with a quarter of an hour to go, the England international getting a standing o from the travelling Blues and Carlisle fans alike, and after a solid 80 minutes for Seamus, he too made way for Brendan Galloway for the final minutes.

Carlisle tried valiantly and almost snatched a late consolation as Gillead made headway down the right and crossed for Ibehre to shoot with Jags making the telling block.

All tolled, a thoroughly professional and comfortable showing from the Blues with Aaron Lennon and Ross Barkley probably the two main contenders for the MotM vote.