You got over it yet? Tough one to take that.

Late conceded goals, getting done over by the FA and Chelsea go together like John Terry, obnoxiousness and hopefully very soon: really bad AIDS. No there’s point in talking about the late goal John, you’re absolutely right, but let’s talk instead of your parents who are utter pondlife which would come as no surprise to anyone who has took any note of your career. A career where you had to highjack lifting the European Cup because you were suspended & egotistical, but mostly because you slipped like Gerrard when you had your chance a few years earlier. We’ll remember you well. Find heroin and bankruptcy real soon please.

Better now, so let’s move on.

Swansea then? Absolutely not, all the chitter chatter has been about Martinez – the tan shoed messiah/Catalan clown** and where Everton are right at this moment. It’s hard to grasp the whole Martinez thing at the moment, for example I’m generally in the “give him time as this could be sound’ camp but there’s more than a handful in the “he’s making the same mistakes and we need to change him” so who am I to say who is right or wrong or how to think or feel?

There’s obviously credit in being massively frustrated with him as demonstrated by the numbers complaining. I get the frustration at throwing away leads and particularly so late on, it punches you in the gut with the impact I imagine a former day Tyson would induce. I also get the derision at his persistence with Howard and also the utter wham he chats to the press.

It’s worth taking a step back for a moment and pondering things with a wider scope though. What do we judge Martinez against? Where we believe Everton should be? In that case we’re in for disappointment as I don’t envisage us winning leagues until there’s the finances at the club to enhance this means, hence a long time is 1987. Finishing fourth? We sneaked it once in a quarter of a century and it wasn’t sustainable. 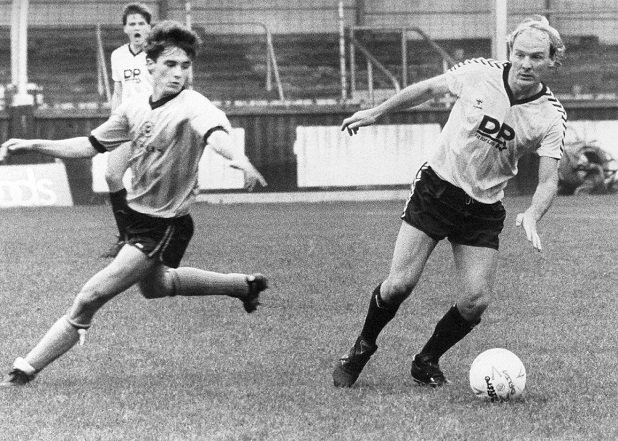 Do we compare Martinez against other managers? To be fair let’s disregard Smith, Royle, Walker and Kendall’s mark II for the sake of fairness and for a point that I’m sure quite what it is. Royle apart we we’ve not achieved much. Moyes brought stability to the club in positioning but to temper that didn’t win anything. What was Moyes criticised for? Being too defensive and at times some mechanical football (some ace footie in the latter years is often forgot mind). Also talking down Everton’s ambitions (glass ceiling, getting to 40 points) and ability to compete at the top. If you remember he was also criticised heavily for not giving youth a chance. And very much criticised for never truly going at the opposition and instead being over prudent.

So compare Martinez against that. Do you think we have purposely gone for the polar opposite of all those supposed weaknesses or do you think that as a fan base we have a tendency to exaggerate circumstance and polarise our opinion into an overly defined camp? Our biggest asset at present is considered to be our young players, the longer they stay at Everton the more chance we have of something good happening. Do you think Stones, Lukaku, Deulofeu, Barkley and McCarthy would hang around Everton too long if Martinez was jibbed off? There’s no easy solution like starting again with a new manager who will change personnel again and revise every facet of the way the club operates down from the how the promising youth teams are set up. Hoping the find the one that sweeps us off our feet until happy ever after. Like Villa have been doing for years, or Newcastle or Spurs.

In the interest of fairness you can also assess Martinez by looking at the data, and the most recent data shows six wins in over twenty games is a statistic that needs to be improved in the remaining games of the season.

There’s just no budging me from the fence so pipe down. 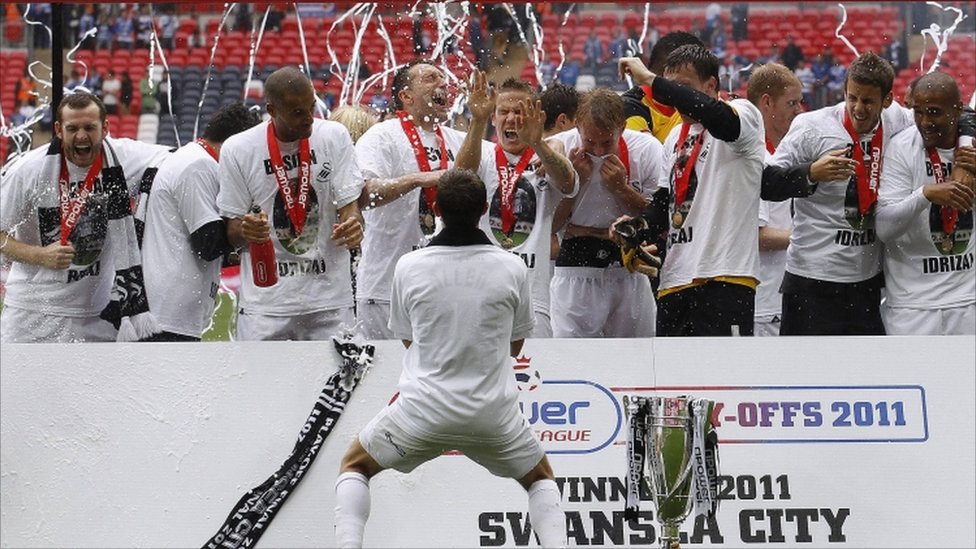 Anyway, the main point is relax a little, we’ve been going nowhere fast for a long time and in amongst the smorgasbord of emotions that this manager and his players bring there is quite probably a path to us becoming better and for the model to be sustainable. If that doesn’t worked then he’ll be gone in good time and we’ll have achieved similar to what we have in twenty years.

Onto Swansea then. Didn’t they win the League Cup recently and then finish above us and we had Swansea fans on the occasionally ace forum attached to this site saying that they had overtaken us now? How things change and so quickly with it too. I’ve seen shouts for Monk as a future top level manager and now he’s been jibbed off by a club he gave long and loyal service to. There’s that boom bust cycle so prevalent in the Premier League right now and it seldom delivers any sort of success that can be sustained.

Sadly, for the partisan of you out there, I don’t mind Swansea and the South Walean people so I can’t be readily cruel to them. They’re sound enough and friendly to scouse accents in that part of the world which is more you can say for many places in England for example. Apart from when you play down there in the late seventies or early eighties, so I’ve been told. 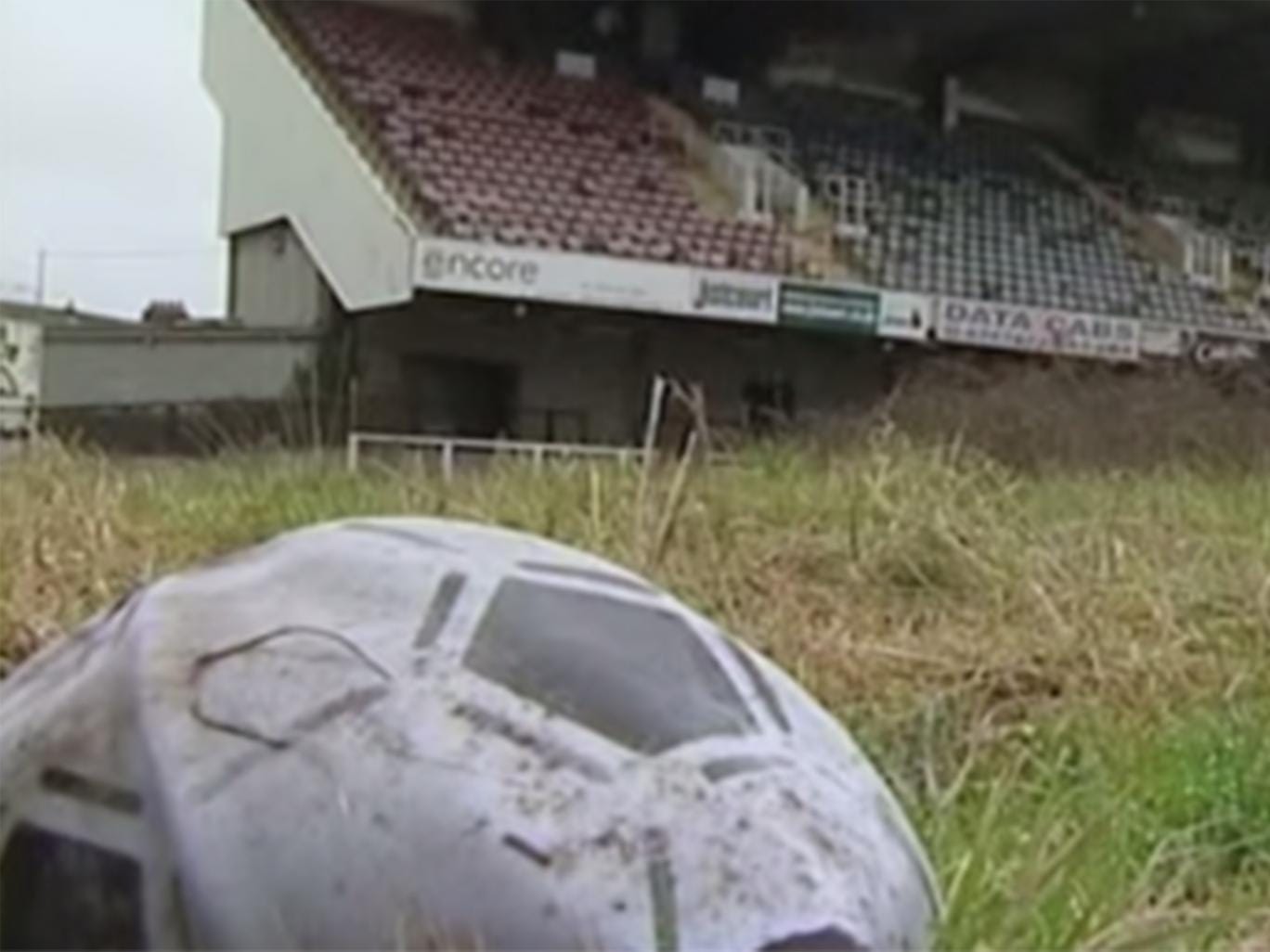 No one does insular quite like Wales and I’m not talking about the country of 2.9 million people being collectively insular, I’m talking insularity all over the show. If you’re from the North, or the South and particularly from the mouth breathing sister botherers in the West. It’s localised to cities, and towns, and even down to villages. Small communities which are hostile to outsiders and ready for a good ol’ fashioned ruck when appropriate alcohol has been consumed or on the rugby pitch.

So as an outsider it’s enjoyable to visit Wales and marvel in this. A night out is usually some sort of drama with either a mass falling out or cheap seduction of womenfolk, whom are uncomplicatedly smutty and fantastic for it.

In many ways Wales is a throwback to simpler times and Swansea is a hub down there as a crappy city but unpretentious and usually good fun to experience, for a while at least. And you can’t blame them for their excitement getting out of there and visiting a city like Liverpool, that the Welsh themselves helped build, and seeing modern vices such as escalators, helicopters, non fast food restaurants and bottles of rum other than Navy or Lambs. And we welcome them to the challenge of seducing one of our local women that don’t give out at mere eye contact or purchasing of a drink. If only like, you’ve got a lot of work do first before they even go near it, boyo.

So that’s Wales and we should be glad that we’ve got the Wirral to ask as a useful buffer against it, while the Wirral battles it’s own conscience to decide it’s own identity which is somewhere between Welsh, Cheshire and WOOL. Apart from on holiday when they’re as a scouse as Scotty Road. 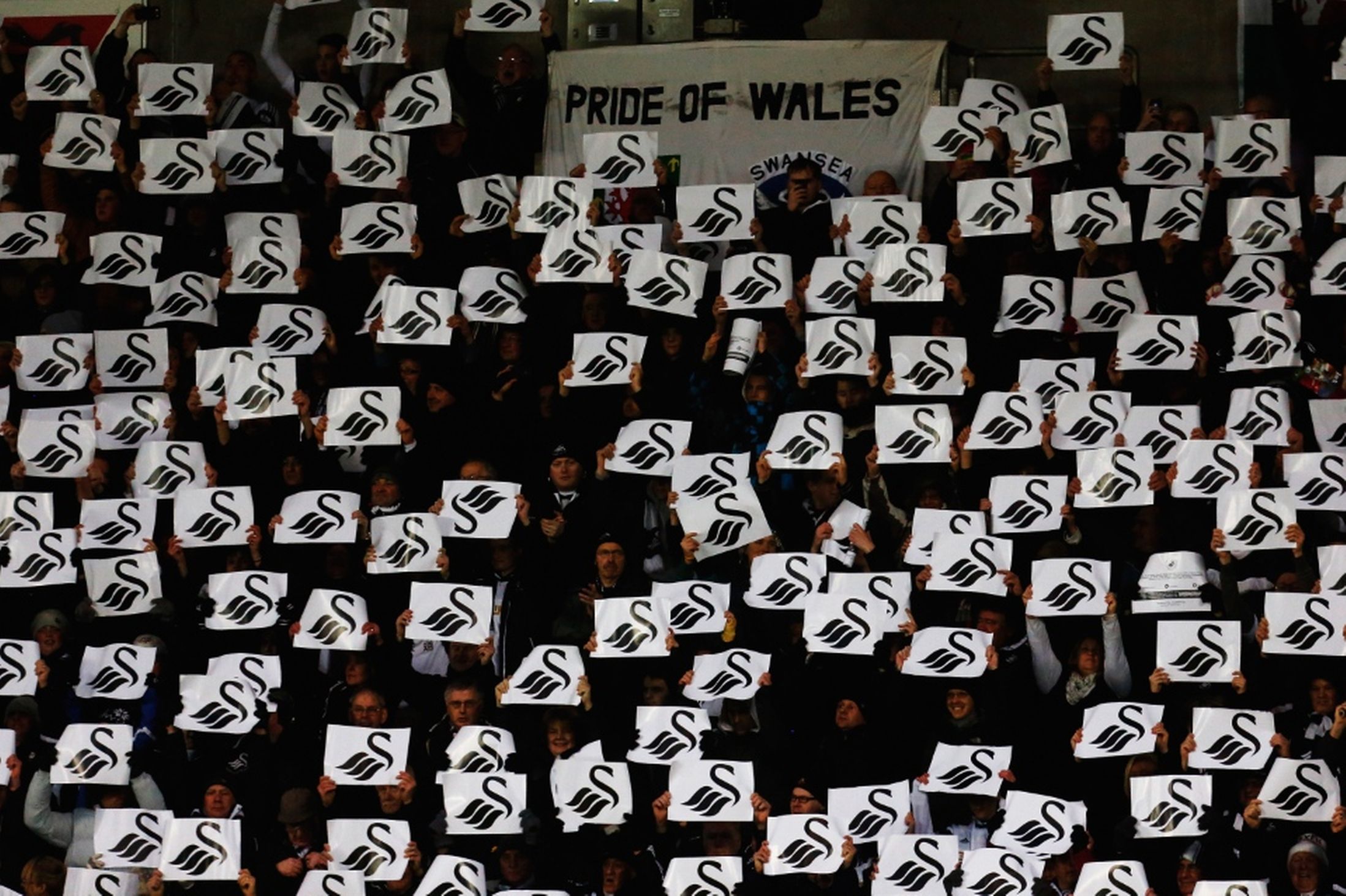 Swansea moved in a weird way this week to replace the caretaker manager they’d recently confirmed would look after them for the rest of the season with an Italian manager called Francesco Guidolin. The more cultured of you – or those, topically, with an aerial that gets S4C in their loft – will know something about him, as it is I know absolutely zip.

As for their Swansea’s players, well there’s a few decent ones who can cause us some grief when we have an Everton moment.

I’ve chatted so much tripe thus far that I’m gonna cut them out as i’m not particularly arsed about them, we should be beating them whoever they put out. 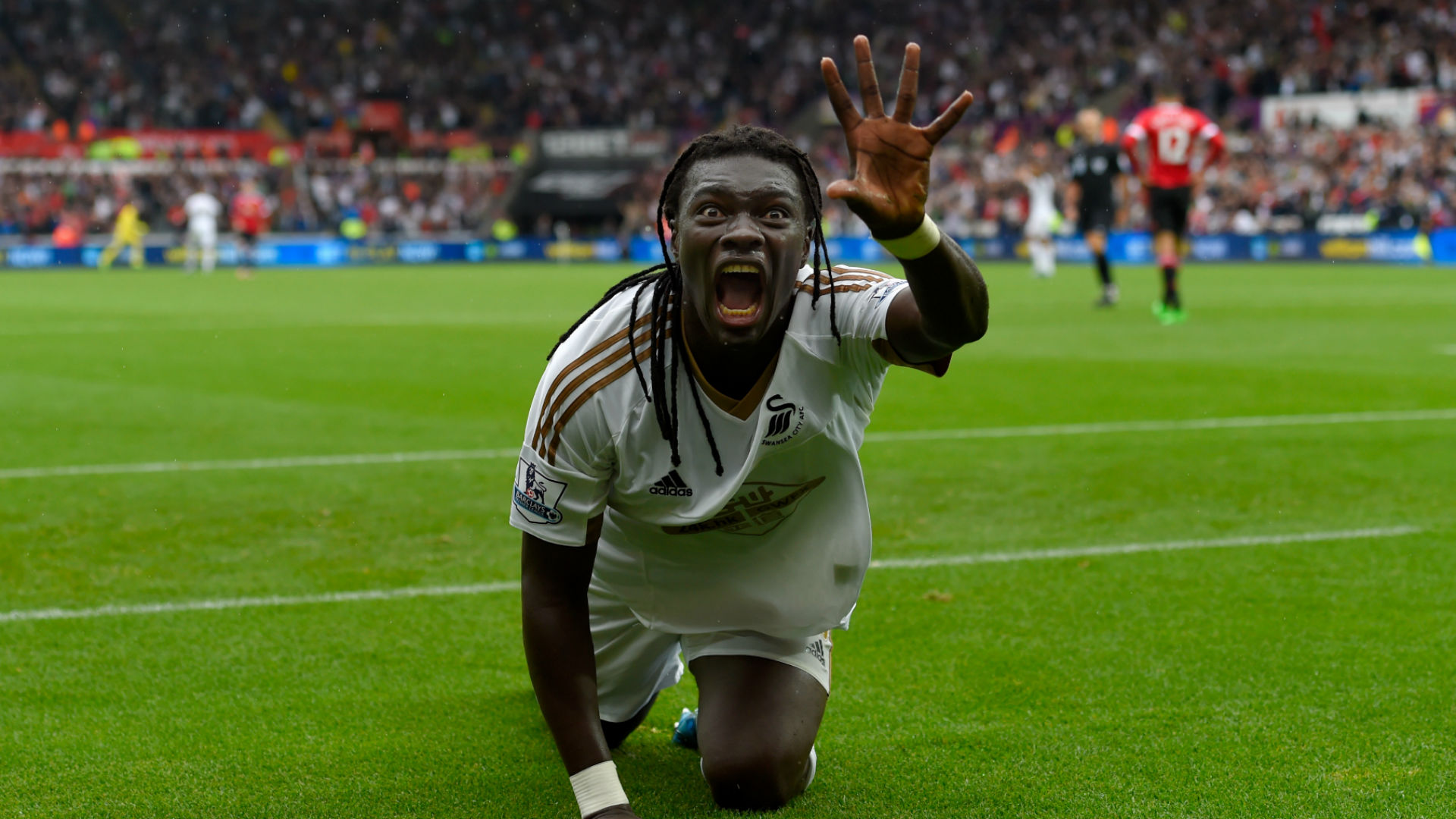 Lukaku has been linked with a 65 million move to Man Utd which is obviously some desperate press cockmuncher trying to get page hits and therefore not true, apart from the bit where Man Utd would probably love him. He’ll be here until summer at least and we need his goals more than the USA needs Donald Trump to be either ruined by a mega scandal or hit by a freak asteroid directly on his swede.

Barkley, somehow, divides opinion but we’ve covered that recently so he’s playing attacking mid whether you like it or not. McCarthy is pushing to be fit but can’t see Besic being dropped for him, although the fall out in the Lower Gwladys would be sensational viewing. Barry should play next to him. Or maybe things will be changed around a bit with one eye on the semi final second leg just three days later? Who knows.

Which leads us nicely on the wider positions, we’ve got some options. Mirallas made me guilty that I’d forgot how ace he can be as he terrorised Chelsea and more than that he put in a real team performance, providing needed cover for the full back position too. I wish more than anything that he could maintain this for at least the rest of the season as we’ll be sound. Deulofeu is probably as close to first pick as you can get out wide and provided yet another assist for our third goal when coming on a sub. We’ve seen a bit more of Aaron Lennon who is very useful to have as an option out wide- same goes for Pienaar of late – and then of course we have Cleverley and Kone who can play out wide, but open to interpretation of how effectively. I’ll leave that to you. That width is a very valuable asset as more teams are sitting deep against us and when we do play one of the top teams we need that pace on the counter to really make a dent against the top defences, I don’t include Chelsea in that. 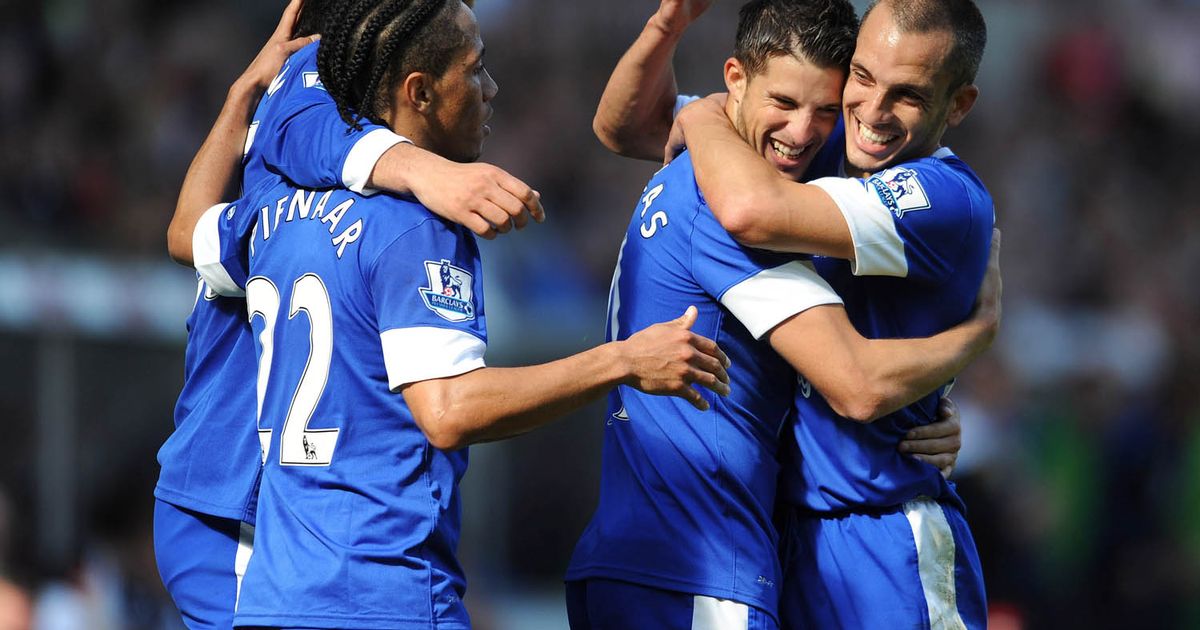 Really, really good to see Baines playing very well and back in the team, he’s probably one of the best left backs you’ll ever see for Everton and lest we forget it. We also have some options in the middle and really it comes down to Jagielka and one other, as he’s our captain and the best at stopping the other team from scoring – apart from letting that ball bounce over his head the tit. John Stones is the obvious choice but you know when you get that feeling? I got that feeling with Funes Mori. He’ll never probably be as good as Stones but he’s got Everton anti hero written all over him, with his Argentinian snidery about him and knack of scoring goals. Embracing our excitable lids in the crowd only scores you extra points too. Oviedo played really well at right back but before we get too excited we will have to see if he can maintain it for a run of games, he’s fit to play this apparently.

Can’t even be arsed talking about Tim Howard but it will be a shame that a decent servant of Everton is destined for an acrimonious end to his career at Goodison. I don’t even know if Robles is the answer but I’d like to find out. 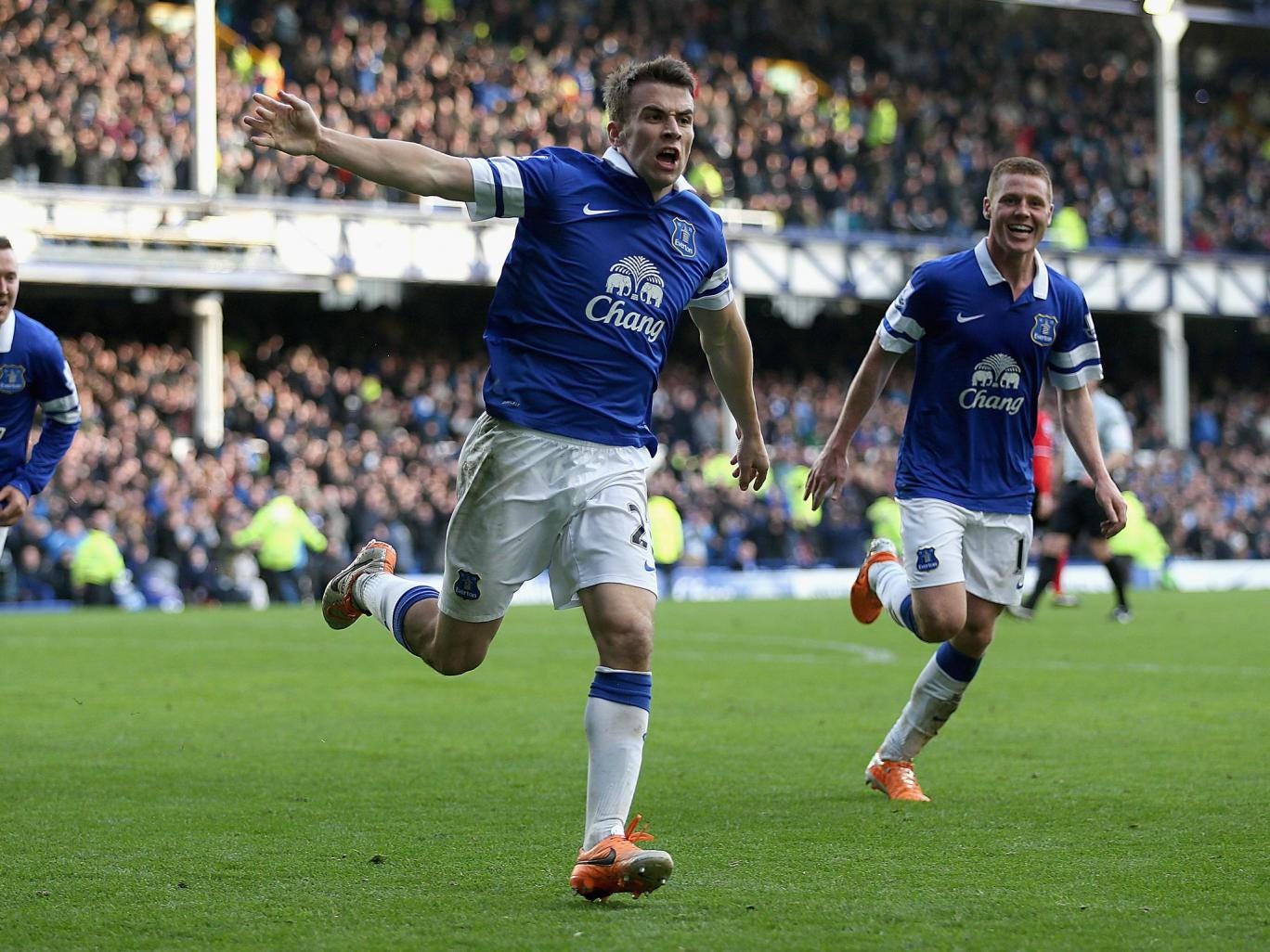 And that’s a wrap. You sure you’re over Chelsea?

Big five games in thirteen days for Everton ahead including two cup ties and three league games where we should pick up points.