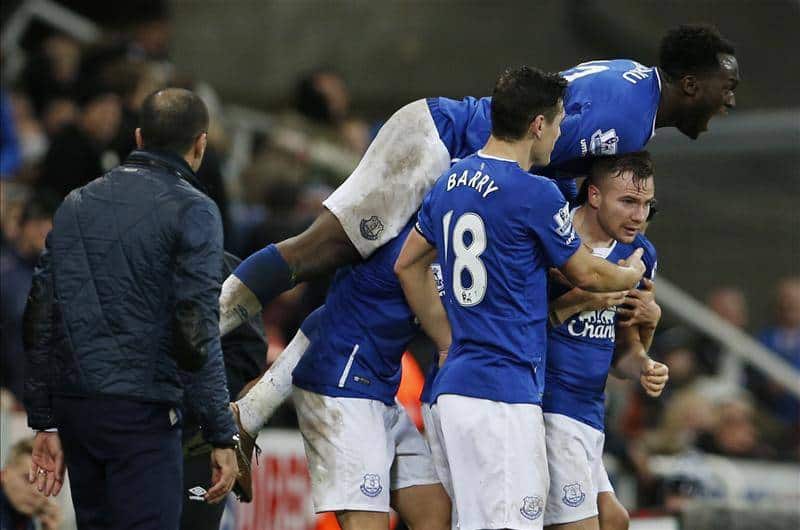 Tom Cleverley heads home in the last seconds to give Everton a moral boosting and deserved win.

A wintertime trip to Newcastle has brought back multiple victories in the past few seasons, and the Blues hoped to make their way back into the European discussion after disappointing results against Crystal Palace, Norwich, and Leicester had left them with work to do before making a top six push. Martinez moved Lennon and Mirallas into the starting eleven to provide Deulofeu with a rest, and the rest of the team was unchanged from their defeat against Leicester.

As has been the case on the road this season, Everton started well against a team lower down in the table. Kevin Mirallas controlled a cross from Coleman and was well saved seven minutes into the match, and excellent pressing in the middle of the field kept the ball in the Newcastle half for the majority of the first half. On multiple occasions, the Blues were able to find plenty of space behind the Newcastle back four and look to cross, but Newcastle’s good defending made for frustration amongst the Everton attackers. Pullbacks to Barkley and Lukaku just missed within the fifteen or twenty minutes. Lukaku also had a penalty appeal denied after he was pulled down by Coloccini while chasing a ball into the box. The next minute, Lukaku was played in by Lennon but his right footed shot was again saved by Elliot. However, after the first half hour or so, things more or less stagnated offensively, and Newcastle grew into the game. Furthermore, poor defending from the Blues made for a couple easy Newcastle chances after the half hour mark. Mitrovic missed a header around the 30 minute mark, and was allowed to make a small run into the box that was scraped away by John Stones. Gareth Barry picked up a yellow for a late challenge on Ayoze Perez, but the more confusing card was the one not given to Janmaat for a push around the 40th minute. Surely the game would have been well in hand for Everton had that card been given, but either way Everton went into the half with 66 percent of the ball, which would have been excellent had they actually, you know, scored a goal.

Newcastle started the second half much better, and while the front four of Lukaku, Mirallas, Barkley, and Lennon were involved in many different attacking moves, they only forced a few corners save a ball from Barkley in which Lukaku rolled the defender only to find his shot saved again by Elliot. Lennon had a low shot test Elliot again around the hour mark, but it was again well saved. Everton still pressed for a winner despite tiring due to the poor state of the St. James’s Park pitch, and Barkley had a shot blocked on the edge of the box that may have squeezed in but for the Newcastle defense. Mitrovic missed yet another header after 72 minutes thanks to more poor defending, and at times it felt like Newcastle were more likely to snatch a goal given Everton’s wastefulness in the penalty area. Funes Mori (who quietly had a good game IMO) had a header from a corner punched away by Elliot, and Lukaku was surprised by the speed of the rebound with an open goal in front of him. By this time, Barkley and Lennon were brought off, and Deulofeu was brought on for the latter stages, along with Muhamed Besic for the first time in what felt like ages. It felt very much like another frustrating draw, and when Osman was brought on for the last ten minutes, it was easy to assume Martinez was playing for a draw. Lukaku had yet another chance in injury time to win the game, but took a while to control the ball and was tackled by Mbemba. However, once the initial corner from Deulofeu was punched out, Tom Cleverley spared Everton’s blushes and notched the goal that Everton probably deserved. While that goal was an excellent moment (as Roberto might say) it still doesn’t hide our position in the table, and I wonder if the Blues will have to improve against Stoke and Spurs if they are to keep pace over the festive period. Either way, a solid result thanks to matchwinner Tom Cleverley, and Everton save themselves from serious questioning for the time being.