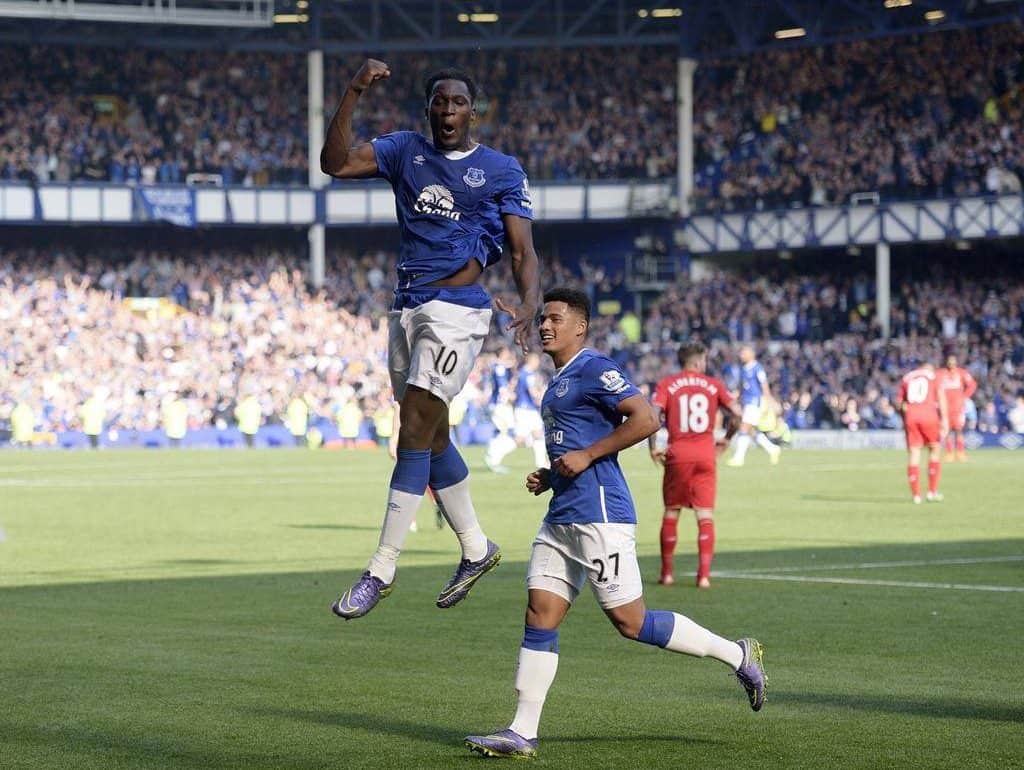 I was so, so, so looking forward to returning from Goodison and extolling the virtuosity of a sumptuous Everton performance and a crushing humiliation of the RS, but as with so many ‘derbies’ of recent years, it ended with honours even with Blues feeling disappointed and them lot probably elated at being able to troop out the ‘you can’t even beat us when we’recrap’ mantra.

No John Stones or Seamus Coleman was pretty much expected but for me, the omission of Arouna Kone from the starting line-up gave the RS an early lift. Much was expected of young Deulofeu on the right flank against Moreno and sadly, the occasion got to him as his first touch was often poor and his decision making suspect. But Gerard is a young, mercurial talent and he will surely learn from this outing.

Bright sunshine, shirt-sleeve weather saw the visitors settle the better albeit aided and abetted by referee Atkinson giving them all the early free kicks. They forced corners and created a couple of quarter chances, even the most one-eyed RS couldn’t say they were half chances.

The Blues – with Romelu Lukaku winning balls in the air, yeah honestly he did, and with a much improved first touch – grew into the game with Gareth Barry using his midfield experience to good effect and providing extra cover for the back four where captain Jags was flanked by Ramiro Funes Mori with the barely out of short trousers Browning and Galloway at left and right fullback respectively.

The midfield was denying Coutinho any meaningful possession and Sturridge hardly looked interested alongside the workmanlike Ings. The first genuine goalthreat went to the Blues on 27 minutes as Ross floated a delicious free kick towards the penalty spot where it was met by the forehead of Steven Naismith. Maybe his contact was too good as instead of the ball arrowing inexorably towards a corner and heralding a crescendo of noise, it went moreorless straight at Mignolet who, nevertheless, made the save look acrobatic.

The Belgian ‘keeper went one better with his next involvement as a cross from Gerard found its way back to the edge of the box where James McCarthy smote a rising half volley and RS blushes were saved by a full-length diving save of some quality.

Boosted by having taken something of a grip on the game, captain Jags was pushing forward like never before, urging his team to the extra effort needed to break down the RS rearguard. Charlie Can was rightly booked for a needless retention of the ball at a throw-in and on his next foray forward went for a ridiculous overhead kick that nearly decapitated Gareth Barry without so much as a raised eyebrow from the referee.

A quick break by them saw Ings race down the left flank with Sturridge in oceans of space on the right, cue a superb covering tackle from Ramiro Funes Mori and the danger was averted… or was it as from the resulting corner, Ings was allowed the freedom of the six-yard box and incredibly, the most average bunch of RS I’ve ever seen took the lead less than five minutes from half-time.

With many Blues thinking and fuming ‘here we go again’ and with Gerard having something of a nightmare, we needed a lift and quick, as we were now in added-on time. The ball went out to the aforementioned little Spanish wingman and this time he delivered the cross into the danger area where Charlie Can miscued the hoofball clearance straight into the path of big Rom and before the incredibly ugly Skrtel could close him down, he despatched the equaliser past Mignolet for 1-1 at half-time and no less than we deserved.

First half stats showed a 50-50 split of possession, them having dominated the corner count 8 to 2 and three efforts apiece on target, though for the life of me, I can’t recall Tim Howard making two saves. Personally, I felt we needed to replace Gerard with Aaron Lennon at the break, and maybe bring Arouna on for Nais who works hard, but doesn’t quite give us what we, or Rom, need in terms of creative support.

With the Blues attacking the Gwladys Street second half, we began better than the first half and Tyias Browning was unlucky to see a header deflected over. Milner appeared to scythe down the increasingly impressive na-na-na-na-na-na Brendan Galloway and somehow escaped a yellow card.

Everton were on top, without being crushingly dominant, with Lukaku giving the ugly Skrtel and the leggy Sakho plenty to think about with his rampaging forward play. Referee Atkinson bemused the home crowd once again as the least Brazilian Brazilian you’ve ever seen – Lucas – blatantly body-checked Naismith in the shadow of the Main Stand.

The hour mark saw the misfiring Deulofeu replaced by the more experienced Lennon – keep your head up Gerard, you’ll be fine – and hopes were again raised that Moreno would be ripped a new rear end by some searing pace. But, it was on the left hand side where a delightful swivel from Ross left Charlie Can for dead and floundering, sadly the attack came to nothing, but our hearts momentarily soared in delight.

Jimmy Mac was yellow carded for a rather innocuous challenge on Milner before the next Blues foray saw Ross, with options left and right, take the shot on only to bend it narrowly wide of the post. The red, sorry, grey-shirted Atkinson finally had no option than to yellow card Lucas when he chopped down Ross as the Blues continued to enjoy the better of the play.

Another attack involving Aaron led to Mignolet making another good save to deny a piledriver of a shot from Rom while on a rare second half raid by the visitors, Brendan Galloway halted Clyne with a superb tackle.

Into the last twenty minutes, Gnashers brought on Lallana for Ings and there were howls for a red card for Lucas when he tripped Jimmy Mac as the Irish international broke past him right under the nose of the referee. A blatant trip is surely a yellow card and with Lucas having been booked barely two minutes previously, then he had to go didn’t he… er, no. Even Gnashers must have realised that Lucas was walking a knife-edge and he rightly withdrew him in favour of the Welsh Xavi, Joe Allen while we – at last – brought Kone on at the expense of Nais.

Sadly and somewhat disappointingly we couldn’t break the deadlock as we deserved to and they couldn’t nick an undeserved winner either while Atkinson waved more yellow cards at both Romelu and Sakho after an off-the-ball tiff.

I don’t want to appear unduly one-eyed, but on the evidence of today, we certainly have more to be reassured for the rest of the season about than our scruffy neighbours. The RS team that Gnashers fielded today despite earning a point, failed to save his hide and in all honesty, they were not very good and he reaped the ‘rewards’ of his wacky philosofee and maniacal transfer activities.

Rodgers has given us a wealth of merriment during his tenure across the park, and in many ways we’ll miss his abject lunacy. Our fear and that of the rest of the Premiership is that they appoint a manager with genuine ideas and coaching credentials who might turn that rag-tag bunch into some kind of cohesive unit.

Mignolet was probably their MotM, but their back four, certainly first half, looked edgy and nervous. Had we gone two up front from the start, I genuinely feel we’d be celebrating. Coutinho was largely anonymous, while Ings and Sturridge were not so much a goal-threatening partnership as one bloke working as hard as he could and the other not 100% fit or particularly interested.

As for the Blues, I’ll mark and comment the side as follows…

Howard – 5. Can’t honestly remember him making a proper save, but the marshalling of the six-yard box at corners has to be his responsibility.

Galloway – 7. For a youngster, he was calm, confident and assured, he has a terrific future ahead of him.

Funes Mori – 7. Those who doubted this lad need to watch this game a few times, as I felt he was very good. He looks to dominate in the air and play the ball progressively, but obviously understands that if it needs to go Row Z, that’s where it’s going.

Cap’n Jags – 7. Another fine showing from the skipper, and as eager to get forward as I can remember seeing him, testament to his confidence in Brendan, Tyias and Ramiro.

Browning – 7. Like his counterpart Brendan, Tyias belied his tender years with an assured performance that bodes well for the future.

Barry – 8. Lots of Blues have decried his lack of real pace and a tendency to pick up bookings, but aside from one woefully wayward crossfield pass right on half time, he was – for me – superb today.

McCarthy – 7. As industrious as ever, I just wish he would have a wee bit more conviction when in possession to get forward.

Deulofeu – 4. Gerard is a mercurial young talent that needs encouraging. He didn’t get too much right today, but he’ll surely learn from today and come back hungry to impress again.

Naismith – 6. As always, grafted like crazy but lacks the necessary craft and guile to be a regular starter. For me, best suited to being an impact substitute.

Barkley – 7. Last seasons’ woes are behind him and he continues to grow in confidence and his influence on games is getting better.

Lukaku – 8. Much better in the air today, particularly first half and his first touch and close control were all improved too. Took his goal well when he could have panicked and caused their central defensive pair no end of headaches.

I think El Bob took a brave and understandable decision to play Gerard ahead of the more experienced Aaron Lennon, even though it didn’t quite work out. And despite the glaring problem with conceding from another corner, the back four with three young players coped superbly and whilst the RS didn’t overtly stretch them, that is testament to how well they played as a unit.

So, another drawn ‘derby’ and honours even. I honestly felt we deserved to win and had we done so, they couldn’t have complained. If there’s a negative on today, it was our failure to make the most of the three or four goalden opportunities that came our way, but for that, I’ll give credit to Mignolet.