In total honesty, I was not expecting to beat Barnsley in the previous round of this, so before reading on please take note that this is massively under prepared, and I’ve had the squits all day. Other than that, the Everton boys are coming to town. Well if you live in Reading anyway. Reading though, I mean seriously. Searching for pictures for this preview was so dull. They were nearly all of Stephen Hunt, and some not even him playing for Reading. Reading.

So fresh off our third away clean sheet in a row if you don’t include letting Barnsley snot 3 past us in the last round of this, we arrive at Reading alive and well in the League Cup. Things certainly looking a lot brighter than the previous round too. John Stones had rather oddly just put a transfer request in, some random lobbed abuse at him, while newspapers were claiming actual Everton fans were forcing him out of his home. Ladies and gentleman, I give you the Transfer Window. More made up stories than Hollywood, and probably worse acting.
Now though, rosey mate. Stones stayed and went full Beckenbauer the last two games, with a bit of Lothar Matthaus in there too. I think even the most hardened Everton fan would find it tough to say we’ll keep him forever, but boy, while we do we have some player on our hands while he is ours. 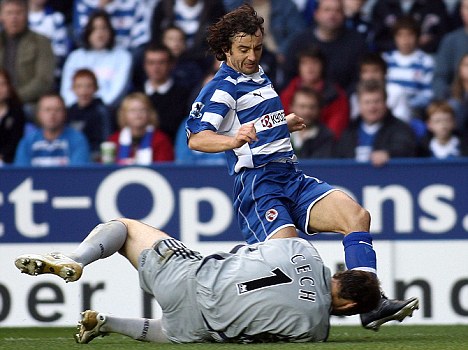 OK OK, enough of the Stones love in. Especially as it’s not all him. Jagielka has been the perfect partner for him. Unless you used to manage Fulham, The RS, and weirdly Inter Milan and Switzerland. In that case Chris Smalling and Gary Cahill are the ones. God I sound bitter, I blame dehydration.
Anyway, Reading. I’ve been to the Madjeski or whatever they call it these days before. Ages ago. I know it wasn’t an Everton game I saw there though. But it was so bad in every single way you can think of I appear to have blocked the whole experience out of my head. Reading vs someone. Was probably 0-0. The ground is that St. Mary’s, Riverside, Lego blueprint that teams seemed to be well into in the early 2000’s, only distinguishable by the colour of the seats. Little to no sort of atmosphere especially when losing. To get to it from Reading train station is nigh on impossible, and that’s even if you make it out past the faux London wannabes who live in this town, thinking they they’re all Southern but somehow by Royal decree. I believe the word to use for them is ‘scruffs’, terrible terrible ones.

The only redeeming feature of the town is an annual music festival that they have to share with Leeds. Imagine sharing something with Leeds. Crikey. Either way, it’s a decent festival as it goes. Not that i’ve been for years and years. There’s something dead weird about blokes over 32 going to music festivals. Why aren’t you at work?

I was saddened to see when researching Reading’s current squad that our favourite smiley Nigerian (not you Joseph Yobo sit down) is no longer on their books. Shame that as despite being a very decent slotter of the ball, he was in all truth dead easy to shut down.
In researching, I had the sort of pleasure of seeing Reading absolutely snot my old man’s team 5-1 on TV a couple of weeks ago. It seems that they have had a decent transfer window for a Championship team, manager Steve ‘Could I Look Anymore Miserable’ Clark bringing in decent players for this level, along the lines of Matej Vydra, Anton Ferdinand, Paul McShane, Lucas Piazon and Orlando Sa. The latter I believe being suspended for our game, which means Wales legend Hal Robson-Kanu will probably start up front against us. Laughably Ali Al Habsi might be in nets for them. Hope so anyway. He owes Martinez for letting him be an actual footballer. They are coming off a 2-0 win at Bristol City on Saturday. But everyone seems to be beating Bristol City at the moment.

Seriously though, enough about them. We know it won’t be easy. Everton don’t do easy, unless it involves piping down Jose Mourinho.
Our line up should see a few changes. I can’t work out several things about Kevin Mirallas at the moment. Is he a tit? Is he really boss? Was it even a red card? Is he suspended for Tuesday? No idea on any of them to be quite honest. Either way, Gerard Deulofeu should start and will literally sex all over them. We know it, they know it, might just depend how hard they kick him. Up top, I wasn’t expecting Lukaku to start at Barnsley but he did, and we don’t exactly have many other choices. Is he really going to play every game this season?! Midfield, could see Osman given a go, Besic too if he’s fully recovered from injury. At the back Funes Mori could start should the manager decide to give one our kings of the central defence a rest for a bit. Full backs, wow, Browning and Galloway giving serious glimpses of a boss future here at the moment at a time of serious need. Robles in goal……maybe.
Tricky one for Martinez in all truth.

We want to win this cup. We need to win this cup. Does messing the team about risk this? Would you rather win this and finish mid table again? All shall be answered my fellow Toffee People. One thing is for sure it will be a hell of a ride.
It always is.