Ahead of Duncan Ferguson’s testimonial today, we’ll be revisiting a few articles from the past…

Joe Royle’s Goodison Park reign got off to the perfect start as Duncan Ferguson and Paul Rideout fired the new boss to a 2-0 triumph in in his first game in charge.

Victory in the 151st Merseyside derby looked an unlikely prospect before kick-off. With just one win in 16 matches, Everton were rock bottom of the Premier League table and bang out of form.

To make matters worse, Liverpool had won 20 of the previous 42 derbies whereas the Blues only had seven wins to their name in that time. 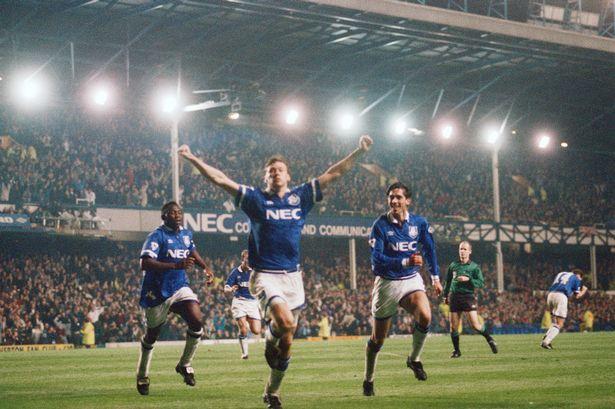 The visitors had the better of a frenetic opening period, dominating possession but reaching half-time with nothing to show for it.

Everton emerged after the break with Paul Rideout on for the injured Matt Jackson and the ensuing tactical reshuffle, with Daniel Amokachi dropping into midfield and Rideout joining Ferguson in attack, gave the Blues the edge.

Duncan Ferguson scored his first goal for Everton and broke the deadlock from an inswinging Hinchcliffe corner on the hour mark, the net rippling with Liverpool keeper David James rooted to the spot.

Rideout hit the post before Liverpool briefly threatened to get back into the tie with a spell of pressure, but the substitute had the rub of the green on 88 minutes, dispatching past James and sealing the win.

Bar a muted shout for a penalty in the 82nd minute, Liverpool could have no complaints.

Everton were resolute in defence, pressed in midfield and took their chances up front.