“It’s definitely the Club I wanted to play for”

Tom Cleverley is delighted to have joined Everton, insisting it’s “definitely the Club I wanted to play for”

Speaking to evertontv, Cleverley said: “I’m delighted to be joining because it’s a fantastic Club. There is an all-round package with the history of the Club, the great players that are currently here, the manager and the fans. It’s definitely the Club I wanted to play for.

“I think Roberto is a great manager and I’m massively looking forward to working with him again. We obviously had a year at Wigan together that I really enjoyed. He knows me and he knows how I like to play, so hopefully we can hit it off again come the start of the season. 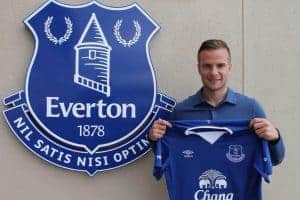 “[The move] happened quite quickly, but he told me about how passionate the fans are here and about the young players who play high-energy football like myself, so hopefully I can fit right in with the squad.

“It’s difficult to think about targets so soon, but it’s a Club that can definitely be fighting towards that top six and hopefully go on a good cup run, which was something I was lucky enough to experience [last] year.

“Playing at Goodison Park is something that excites me. I’ve always said it’s one of the hardest places to come as an away player because it creates one of the best atmospheres, especially when the team is on top.

“I’ve always enjoyed playing there. It’s one of those really exciting grounds and I’m genuinely excited to be here.”