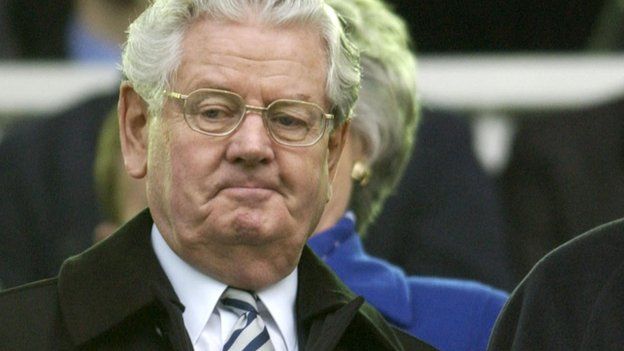 The most successful Chairman in the history of Everton Football Club only goes some way to defining the impact Sir Philip Carter had at Goodison Park. But those trophies he helped deliver to fans of the Blues everywhere are just one aspect of the legacy created by a man who had a profound impact on the city of Liverpool and the game of football nationwide.

A hugely successful businessman before entering the footballing realm, the impact Sir Philip had on the game he loved is almost immeasurable. An understated gentleman who exuded class and dignity, he was never boastful of his achievements. But beyond his tireless endeavour for Everton, he also stands as one of the visionaries who helped transform the image of the game in this country.

Against a grim backdrop of recession, hooliganism, dwindling attendances and a European club ban, Sir Philip was one of the five men who instigated a process that would forever change the complexion of English football – the creation of the Premier League.

Now the world’s most lucrative association football competition, without the input, vision and drive of Sir Philip, it may never have come into existence.

By the time the Premier League came into existence in 1992, Sir Philip – in his role as Everton Chairman – had already sealed two league titles, an FA Cup and a European trophy – not to mention defeats in the final of the Milk Cup and the FA Cup twice, plus another near miss in the league during what remains the most consistently successful spell the club had enjoyed since the 1930s.

That was an era when the young Philip Carter made his first visit to Goodison Park as a four year old, and sparked a lifelong love affair with the Toffees.

He was born in Glasgow in 1927 and the family moved to Lancashire when he was two years old. He attended Waterloo Grammar School, served as a pilot during the Second World War and joined Littlewoods as a 21-year-old in 1948. He progressed through the company joining the main board in 1965 and in 1976 he was installed as the Managing Director by Sir John Moores before retiring in 1983.

His first spell with Everton began in the 1970s when he joined the board of directors, becoming Vice-Chairman before being installed as Chairman in 1978.

The loyalty Carter famously showed to Kendall during the early years of his tenure as manager wasn’t an isolated incident. It became a tenet of his chairmanship.

Even when Everton were incapable of such spending power, he switched the Club’s bankers in 1982 to one that would sanction the £60,000 overdraft needed to purchase Peter Reid.

He relinquished that role during the Peter Johnson era, but was asked to return by Bill Kenwright in December 1998 where he brought a calm assurance to club business following the turbulence of the Johnson era.

In June 2004, at the age of 78, he was made Life President of the club and in August 2008 he returned to the boardroom once again, more than three decades after his first appointment as a director.

It was fitting that in the summer of 2014 he should be presented with the Howard Kendall Award at the Club’s end of season’s awards evening.

Sir Philip Carter passed away on Thursday 23 April 2015. Tributes from fans are flooding into our forum. Leave yours here.