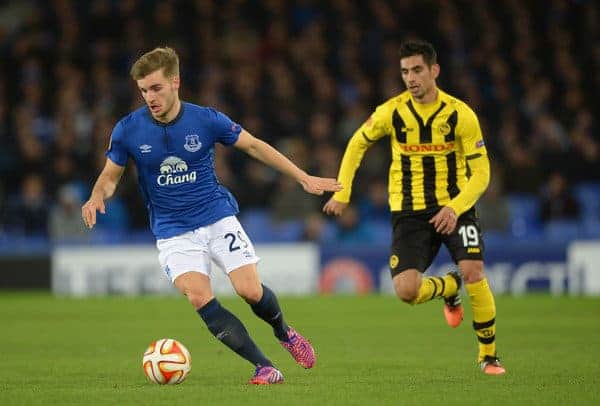 The left-back impressed again during the 3-1 win over BSC Young Boys on Thursday but is out of contract in the summer.

However, Martinez remains confident of the likelihood that the 21-year-old will be at Goodison next season, but he does also welcome the wealth of options at his disposal at left-back, with Leighton Baines and Bryan Oviedo also battling for that spot.

He said: “Remember we want comp for places. We want a squad of players that anyone involved can come in and perform. The left back position is a really strong one of ours; not just Leighton Baines but Bryan Oviedo, two full internationals, and I think Luke Garbutt has the potential to become a full international for England as well.

“He’s still developing but when you see him perform as assured and composed as he did last night it shows he has no fear to compete against anyone for his competition. That’s what we want.

“I do feel that a player like Luke is going to stay with us for the long term. But my only concern now is to look to see Luke fighting for his place.”

Martinez added that Garbutt, who signed from Leeds United’s academy in 2009, has flourished thanks to a careful career plan for him at Goodison.

“Luke has been at the club since the age of 16 and in the last 16 months we’ve spent a lot of time on putting a plan together to give him a path to develop,” he said.

“He’s been taking advantage of that from going out on loan to coming back and being involved in certain games. Now you can see he’s ready to help the team and it was a joy to see him enjoy his football last night.

“Whatever happens in the future I’m sure will be good for both parties.”