Having done exceptionally well to land the striker - making him the most expensive buy in Everton's history at a staggering £28million - Martinez is chiefly to blame for Lukaku's wish to leave.

Roberto Martinez has given an exclusive interview to Bleacher Report ahead of the Merseyside derby, and as part of their “Inside Everton Week”.

Martinez discussed Everton vision and the excitement around young players such as Ross Barkley, John Stones and Romelu Lukaku. Martinez also talked about future stars at the club and what he looks for in young players moving through the ranks.

On his 18 months in charge at Goodison Park…

“[It] has given me a lot of information and a clear idea of what is needed to go forward and make sure that we get in that position where we can become a winning football club again.”

On what sets Barkley, Lukaku and Stones apart… 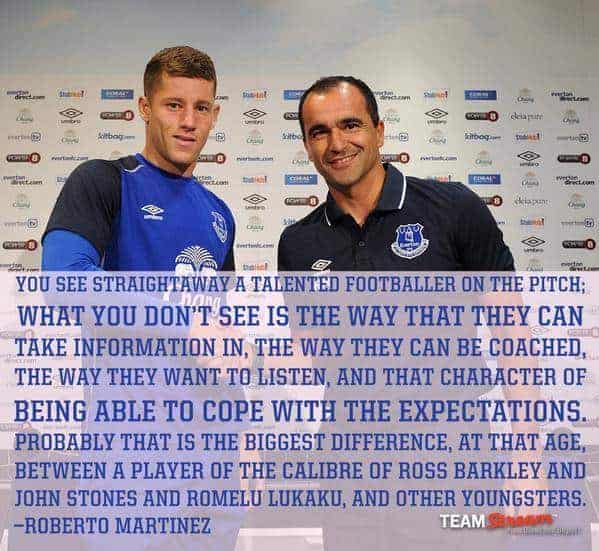 On the Everton Way and his vision for the future…

““[It is] very much based in winning football games by controlling the football, by trying to have a high pressing game and a dynamic game. I think that you need to be very flexible—we like to be a team that can play in different ways, use that to our advantage—and what I’m really excited about is the team that we have, that we can do that in an Everton way.

“I think there is a perfect way of us developing into a team that can win a title. Working with the young players and working with a certain way of playing that will make us different to other clubs are the two main ingredients of that, and that’s what we have.

“It has been a terrific, terrific experience so far. It feels home, it feels a perfect fit, and I’m very much excited about what’s in the future.”